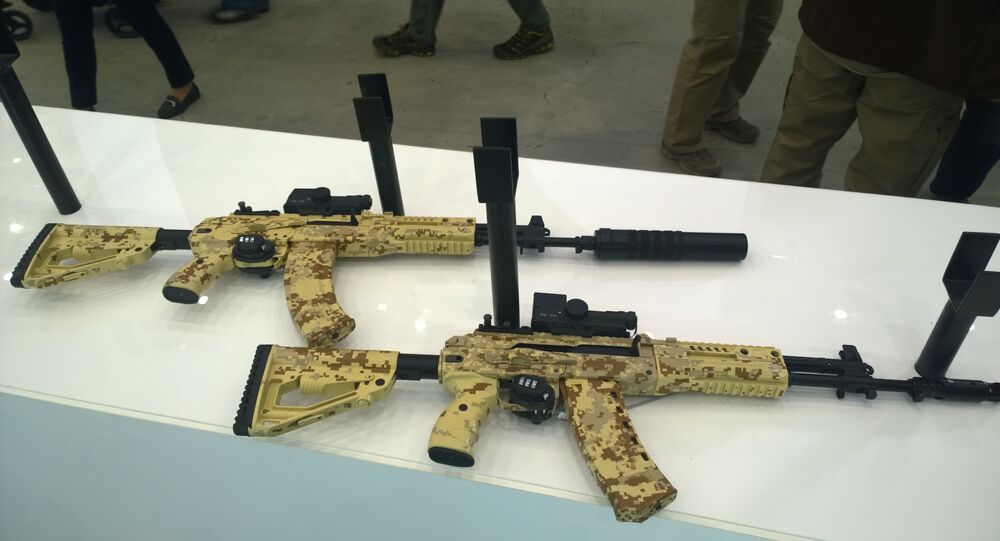 The Kalashnikov assault rifle is one of the most controversial automatic weapons around, just like its American counterpart, the M16. Some hail it as the most reliable such weapon ever built, while others describe it as “outdated.”

The AK-47/74 series of rifle is one of the most prolific and useful weapons on earth. More than 100 million have been made in various parts of the world since 1949 – more than FN FALs, M16s, Heckler & Kochs and Uzis combined.

Still, despite the AK-47/74’s utility, accuracy and ruggedness, numerous attempts have been made to find a replacement for Mikhail Kalashnikov’s legendary invention.

© Sputnik / Grigoriy Sisoev
Kalashnikov's Know-How 'Should Help It Withstand Pressure of Global Competition'
In 1981, the Soviet Defense Ministry organized a tender for an assault rifle that would be twice as better as the AK-47/74. As a result, the Nikonov AN-94 submachinegun successfully passed field tests and, although never mass produced, was adopted by the armed forces in 1987.

Talk about pensioning off the tried-and-true AK-47/74 resumed in 2011, after the Defense Ministry announced that it was cancelling orders for more Kalashnikovs in addition to the 17 million it already had.

Some experts were considering the AEK-971 assault rifle, designed in the late 1970s, as the most likely replacement for the veteran AK-47. Some even talked about buying FAMAS rifles from the French who discarded them in 2016 opting for the more advanced German-made HK416 assault rifle.

The AK platform is famous for its simplicity, reliability, structural strength and low price appeal. The downsides, especially when compared with its most advanced foreign analogues such as the FN SCAR and HK416, are its outdated ergonomics, inconvenient fire mode selector, comparatively low accuracy of fire, etc.

Critics also point to the AK platform’s “low modernization potential” and non-modular construction, which is the predominant trend in 21st century firearm production.

In theory, modular construction and interchangeable barrels and variable calibers may be vital for Special Ops units when you have to “assemble” a rifle for a specific mission, but many experts describe this as just a marketing trick by arms manufacturers eager to make more money.

© Sputnik / Valeriy Melnikov
Oldie but Goodie: Little Things That Keep AK-47 on Top of the World
Ergonomics-wise the AK’s bolt handle, the clip fixation and the butt shape are reminiscent of the Garand M1, FN FAL, M14 rifles of the mid-20th century and really look old-fashioned.

However, modern arms makers – big-time and small alike – have learned to adjust the AK platform to the demands of this day and by minimizing the blowback and with a variety of user-friendly attachments.

According to the Kalashnikov Concern, their all-new AK-12, unveiled during the Army-2016 expo in September, will be able to remedy all these problems.

The long and winding roads of AK-12

The AK-12, developed in 2011, looks very much like the AK-74M but with better ergonomics: a telescopic butt, Picatinni rails a newly designed barrel receiver a telescopic sight can be easily mounted on.

The barrel is weighted ensuring more accurate fire. The fore grip and the hand guard are attached to the barrel receiver and the gas tube.

In their effort to make the AK-platform as modular as possible, the Kalashnikov designers have unveiled the RPK-16 interchangeable-barrel 5.45 mm light machinegun based on the AK-12. With a long barrel the RPK-16 can be used as a machinegun and with a shorter one – as an assault rifle.

'Anyone With AK-47' Can Overmatch US Soldier in Fire Fight

Oldie but Goodie: Little Things That Keep AK-47 on Top of the World