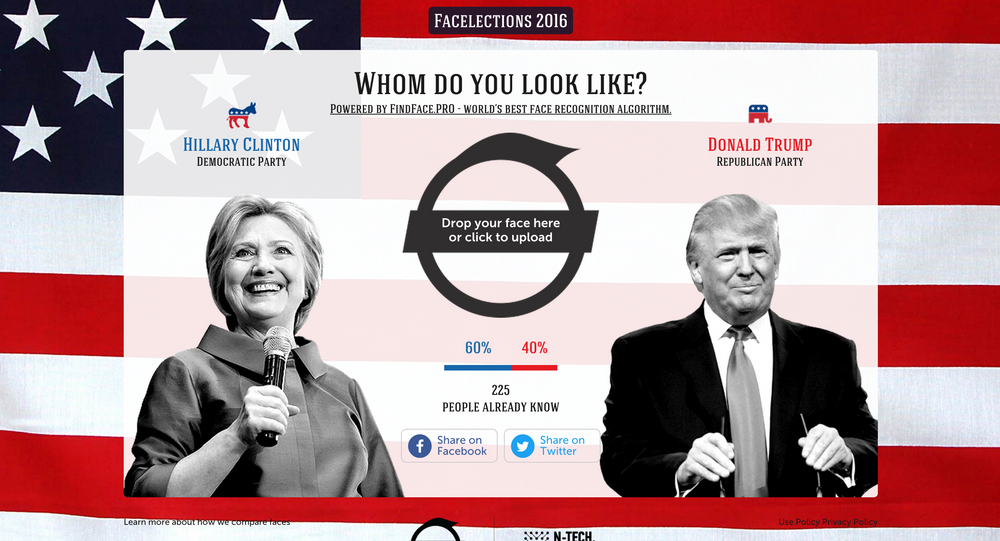 While it may not have crossed your mind whether you look more like Hillary Clinton or Donald Trump, if you ever get the inclination to find out then Russian start-up NTechLab will tell you, and all you have to do is submit a single photo.

Regina Konstantinova — Moscow-based software company NTechLab, the developer behind the world's best face recognition technology, has a new magic product on offer — Facelection 2016. The service is based on the FindFace algorithm that reads your facial features, and tells you who you look like, Hillary Clinton or Donald Trump.

YouTube/Sputnik
Vote With Your Stomach: Moscow Cafe Dishes Up Trump and Clinton Wraps
So, if you are among those who haven't taken sides yet, this service might help you to make up your mind, at least if you want to vote on the person you most resemble.

All you have to do is upload your photo to the website, and then you'll get a reply telling your percentage physical match to one of the presidential candidates. The site also shows the total number of those who already revealed whether they are Trump or Hillary look-alikes.

The idea to implement the FindFace algorithm in this way was a kind of challenge.

"We see the application of our algorithm in completely different areas: security systems, retail, finance, and many others. But we also like to solve non-trivial problems, including the one in the framework of this project," NTechLab CEO Alexandr Kabakov told Sputnik.

"Especially for this project we modified the neural network so that it does not take into account the gender of the person while determining the similarity," he explained.

Interestingly, when Alexandr and another NTechLab co-founder Artem Kuharenko tested the new service on their own photos, they had very different results. As Alexandr revealed, he looks more like the Republican Party representative and Artem has the features of the Democratic one. Hopefully that won't cause a divide within the company!

The two US presidential candidates were selected as "samples" for a reason.

© REUTERS / Brian Snyder
Clinton Retains Slim Lead Over Trump in Final Push Toward US Presidential Election
"Hillary Clinton and Donald Trump have grabbed everyone's attention for a long time, becoming the most popular media persons far ahead of show business stars. The election campaign has become one of the most intense and controversial in US history, the course of which is followed all over the world. And the elections, which will be held on November 8, are the most anticipated political event of the year," said Alexandr, commenting on the choice.

"I am sure that the potential of the algorithm developed by NTechLab is almost limitless, and I think that there will appear many more interesting tasks in front of us. As Marcus Cicero said ‘The face is a picture of the mind,' so we hope that our new service will help users learn something important about themselves and the candidates for the US presidency," he concluded.

The NTechLab's FindFace technology was recognized as the most accurate face recognition technology ever and took the first place in The MegaFace Benchmark 2015, a world championship organized by the University of Washington. The artificial intelligence algorithm identifies a person from a photo reading his facial features, no matter what angle the photo was taken from or how the person's appearance changed because of aging, different facial expressions or wearing glasses.