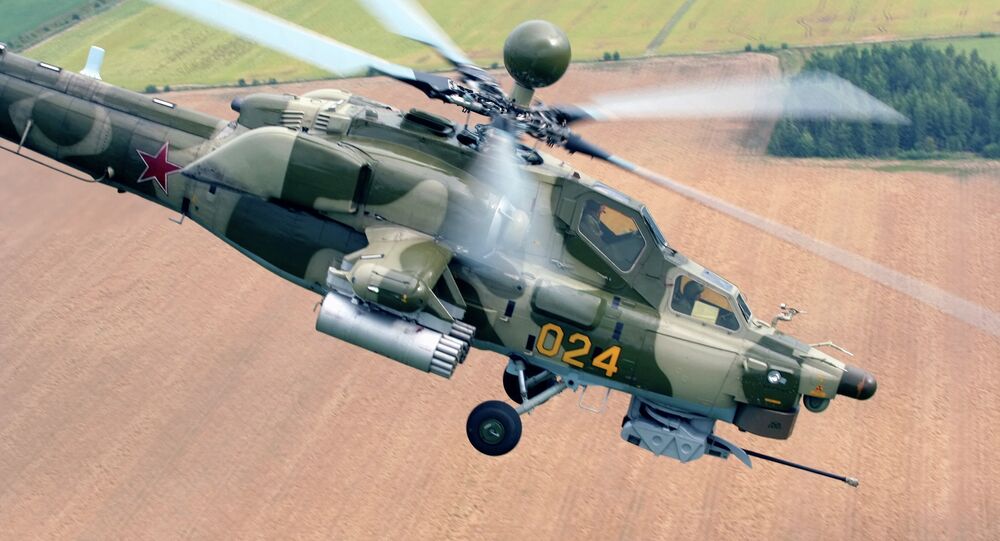 The modernized version of the Mi-28NM "Night Hunter" helicopter gunship will be armed with bombs and be capable of exchanging data with UAVs, according to the newspaper Rossiyskaya Gazeta.

Russian Helicopters
Alligator, Killer Whale and Co.: Russian Helicopters Contesting Superiority in Navy
The newspaper Rossiyskaya Gazeta quoted Yevgeny Poluyanov of the Mil Experimental Design Bureau as saying that the upgraded version of Russia's Mi-28NM "Night Hunter" attack helicopter will be equipped with bombs and be capable of interacting with unmanned aerial vehicles.

According to Poluyanov, the new Mi-28NM will be able to interact in a single information space with ground combat units and other types of high-tech weaponry, including drones.

Poluyanov said that the Mi-28NM's new version will be armed with various kinds of guided and unguided missiles as well as a bomb arsenal.

"The helicopter is also equipped with the latest anti-jamming system and a laser array designed to deflect all existing heat-seeking missiles," he said.

© Sputnik / Grigoriy Sisoev
Russian Aerospace Forces to Start Receiving Mi-26T2 Helicopters in 2018
He added that this is achieved through the use of advanced Ataka and Khrizantema air-to-air guided missiles, which are part of Mi-28NM's armament.

The Mi-28NM is a modernized version of the Mi-28N Night Hunter attack helicopter; it is being upgraded to become a fifth-generation gunship. The project, which has been in development since 2008, is expected to be complete by next year.

Among other things, the new version features a 360-degree radar and an advanced weapons guidance system that ensures faster target acquisition through an upgrade to the helicopter's fire control system.