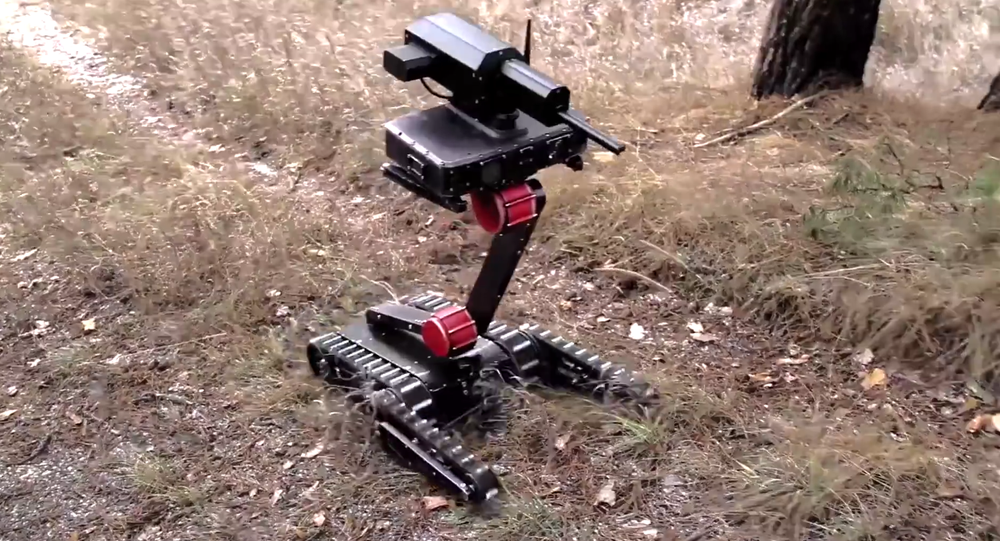 Despite having the name of a rabbit breed, RS1A3 Minirex is a high-precision killer-robot which can climb stairs and easily fit in a backpack.

The new Russian tactical robot, RS1A3 Minirex, was shown off during the 20th International Homeland Security Exhibition Interpolitex 2016, which took place in Moscow on October 18-21.

The armed machine was designed by Russian brand Lobaev Arms of the weapon manufacturer KB Integrated Systems. The light tactical complex, as specified by the manufacturer, was developed for conducting sniper fire in urban warfare conditions and counter-terrorism operations.

© Sputnik / Sergey Pivovarov
Russia Develops ‘Humanoid’ Robot Tank Complete With Head, Arms and Fingers
Minirex is a light and swift machine: it has a weight of 35 kilograms and it can be carried in a backpack. The machine can easily climb stairs and fire from windows. The complex is also equipped with a laser rangefinder, a weather station and a ballistic computer.

The robot can stay up to 30 hours waiting for its target without changing its battery. Its effective range of fire is 400 meters.

The module equipped for combat fire has a base caliber of 7.62x39 mm, a barrel length of 200 millimeters for the assault version and 400 millimeters in the universal version. Minirex can fire both lethal and non-lethal ammunition in either semi-automatic or automatic mode. Semi-automatic fire is conducted by a shooter-operator, who carries out alignment through the camera with 24x optical zoom.