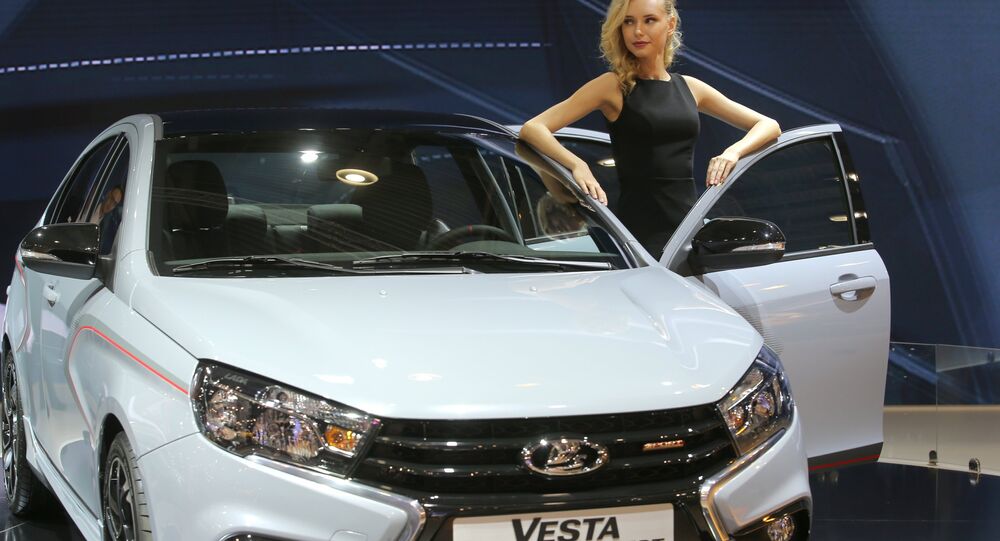 Last week it was reported that in the first nine months of 2016, the sale of Lada-brand automobiles in Germany spiked over 41% compared to this time last year. Although the absolute figures remain low (amounting to just over 1,200 cars), they are part of a trend observed in many countries worldwide, where demand for Russian vehicles is growing.

In absolute terms, of course, the figures are still low, but they have been climbing steadily over the last several years, doubtlessly assisted by the slide in the ruble's exchange rate. Last year, Russian automotive magazine Kolyesa ('Wheels') calculated that German imports of the famous Russian brand jumped by over 460% between 2014 and 2015.

Commenting on the statistics, PolitRussia contributor Ivan Proshkin noted that while Lada's successes in the former Soviet Union and developing countries are understandable, given the brand's cost-reliability ratio, the fact that Germany, one of the absolute leaders in global automotive design and production, is showing a growing interest in the Russian brand, is significant.

© Photo : Sergio Antonelli
A Dream Car: Russian Niva SUV the Pride and Joy of Motorists Worldwide (PHOTO)
The journalist recalled that the Lada 4x4, for instance, can be purchased at Germany's official Lada dealerships – Lada Deutschland, for between ten and eleven thousand euros – several times less than what one would pay for a German SUV.  The Lada Granta meanwhile, would set buyers back between six-and-a-half and seven thousand euros, which according to statistics from last year made it the cheapest new car one could buy in Germany, according to Auto Bild magazine. The Lada Kalina supermini also made it into Auto Bild's top three.
© RIA Novosti . Yury Strelets
Lada Kalinas undergoing tests at the AvtoVaz test track in Tolyatti.

For comparison, Proshkin recalled, German giant Volkswagen's budget lineup of Polo and Golf compacts starts at prices ranging from twelve-thirteen and seventeen-eighteen thousand euros, and that's for the base models.

And according to the commentator, it's not just the price point that Germans find attractive – but also the low cost of parts and maintenance.

"Low purchase and maintenance costs make Ladas ideal for use as a workhorse, including doing hard labor in the countryside and off the beaten track of the city. This, in turn, is one of the reasons behind the popularity of the Lada 4x4 and Lada Granta. There's also the ruggedness of Russian cars – their ease of operation and lack of effort needed to maintain them in good condition."

© Sputnik / Iliya Pitalev
Not Your Ordinary Lada: Russian Cars Steal the Show at Moscow Auto Salon
But while Germany may serve as a good entry market for Lada, the areas where AvtoVaz and other Russian companies including Gaz and Kamaz makes their serious export earnings include the former Soviet space, Egypt, Southeast Asia, South America, and Southern Europe (mostly in the former Yugoslavia). There too, the ruble's decline has helped improve sales. In 2015, for instance, AvtoVaz saw 18.7% sales growth to Kazakhstan, 167% growth in Azerbaijan, and 134% growth in Ukraine, despite the crisis in relations between Kiev and Moscow.

Truck manufacturer Kamaz, for its part, has opened assembly plants in Vietnam, Pakistan, and India, and recently expanded its operations to markets including Saudi Arabia, Chile, Nicaragua, Sudan, Angola, Venezuela and Panama. By 2020, the company plans to export up to 30% of its production abroad, up from 18-20% seen in recent years.

© Sputnik / Ruslan Krivobok
While serving as the workhorse of the military's truck fleet, Russian truck maker Kamaz has also been busy modernizing its civilian vehicle offerings.

Car and truck manufacturers themselves aren't the only ones with high hopes for the domestic automotive industry. Late last month, the Ministry of Industry and Trade announced that it expects the export of cars and trucks to amount to at least 300,000 units by 2025. To this end, the state has allocated 100 billion rubles ($1.58 billion) to support the industry between 2017 and 2019, aimed at stimulating exports and helping to strengthen Russian companies' positions in Europe and emerging markets.

© Sputnik / Alexey Bushkin
Ice Roads of Siberia: Where the Bravest Dare to Venture
Commenting on that piece of news, Proshkin noted that while "excessive optimism would not be warranted, the government's stake on the export potential of Russian automakers undoubtedly confirms that it has serious intentions to turn the Russian automotive industry into a world leader. If before exports were considered only a minor item in automakers' earnings compared to sales in the domestic market, today, no less attention is being paid to winning foreign markets as well."

"Indeed, given the fact that in 2014, economic decline has affected the Russian automotive industry, expansion into foreign markets can help to neutralize the negative effects caused by financial and economic instability. Russian producers need new sales volumes – incomes which could ensure a return on investment for development and certification for export markets, and the creation of service systems in these countries."

"Additionally, the present exchange rate provides for opportunities for the rapid creation of dealer networks and service centers in other countries, and good opportunities to produce Russian cars abroad. The latter, incidentally, is already being done by Gaz, which began the production of the Gazelle Next in Turkey in the fall of 2014."

In other words, Proshkin noted, Russian automotive companies' growing popularity in traditional and new markets, together with a favorable exchange rate, and state support for expanding export potential, are certain to bring a series of benefits to the industry over the next few years.

Russia's Top 10 Non-Energy Exports (You May Be Surprised)