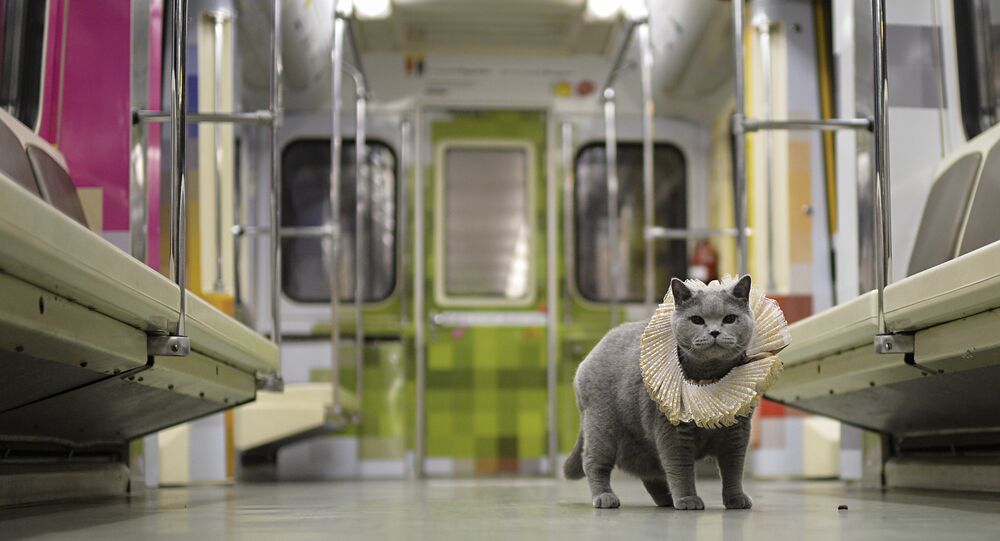 A British Shorthair cat was seen riding Moscow’s newest theme train, dedicated to the anniversary of the great poet and playwright William Shakespeare.

The chubby kitty's appearance on board wasn't accidental. Shakespeare often mentioned cats in his works; researchers have found more than 40 references.

The honorable feline passenger, dressed in a medieval-style ruff, strolled along one of the train cars decorated with verses, pictographs and images related to the British author. The cat also occupied a seat and posed next to the Shakespeare's portrait used in the trains design. By the way, the writer is depicted on it holding a similar cat on his hands. Or, maybe that is actually the same cat, taking into consideration that they have nine lives?

The new exposition "Shakespearean passions" was launched in May 2016. The Moscow Metro and the British Council teamed up in a project to mark the UK-Russia Year of Language and Literature, as well as the 400th anniversary of William Shakespeare.

Since the launch, the train has operated on the Filyovskaya Line of the Moscow Metro. Now, it can be seen on the Arbatsko-Pokrovskaya Line.

The outside of the train cars are decorated with pictures of modern young people, representing the characters of Shakespeare's era.

In addition, the train is equipped with selfie-points and provides access to a special web platform, with the help of which passengers will be able to learn about the writer, download a game and even take part in competitions.

To Ride or Not to Ride? 'Shakespearean Passions Train' Comes to Moscow