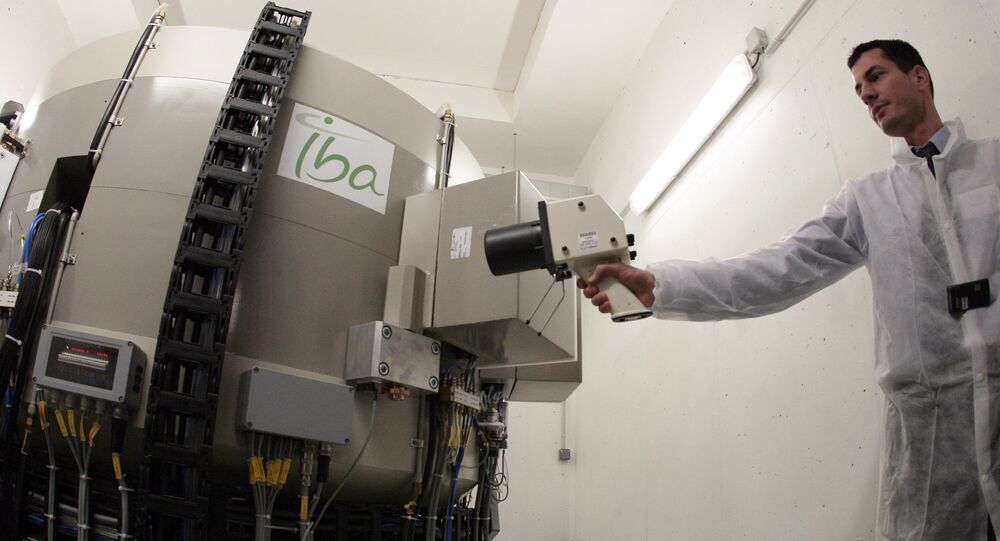 The new clinic in Russia's Ulyanovsk Oblast is being fitted with a cyclotron, and will be Europe's largest radiotherapy center after it opens next year, Rossiyskaya Gazeta reported on Saturday.

© Sputnik / Sergey Guneev
Russian Scientists Use Nuclear Reactor to Fight Cancer
A clinic in the city of Dimitrovgrad, in Russia's Ulyanovsk Oblast, is receiving revolutionary new medical equipment for the treatment of cancer and other illnesses, Rossiyskaya Gazeta reported on Saturday.

The equipment is a type of particle accelerator called a cyclotron, and is being installed by Belgian company IBA.

A cyclotron is used to carry out proton therapy, a revolutionary new cancer treatment which uses protons rather than X-rays to treat cancer.

The X-ray radiation widely used in cancer therapy is made of photons, a form of electromagnetic radiation. The X-rays destroy cancer cells so they can no longer multiply, but because doctors are unable to adequately direct the pattern of radiation, healthy cells may receive a similar dose of radiation and become damaged.

The main advantage of proton therapy over ordinary radiation therapy is that it results in less damage to surrounding tissue. The 220-ton cyclotron uses magnets to speed up protons, tiny positively charged particles found in every atom in the universe which can destroy cancer cells at high energy.

Proton beams in the cyclotron travel at up to two-thirds the speed of light, and are directed at tumors using PET, CT or MRI imaging. The large particle accelerator enables doctors to control the beam of protons and aim it precisely at the cancer cells.

Unlike X-ray beams, proton beams stop once they hit their target. This precision allows physicians to use higher doses of radiation to control the tumor, and reduce damage to surrounding tissue.

© Flickr / Trygve Utstumo
Medical Breakthrough? UK Man May Be First Patient Cured of HIV
The cyclotron is at the center of Russia's first radiology center providing proton beam therapy, a 19 billion ruble ($30.5 million) project which will be the largest center of radiology in Europe after its scheduled opening next year.

The facility consists of a proton therapy center with the capacity to treat 1,200 patients a year, a center for radionuclide therapy, a hospital with 460 beds, a rehabilitation center and an outpatient clinic.

As well as cancer patients, the new medical center will treat patients with cardiovascular, neurological and endocrine disorders. In total, the Dimitrovgrad facility will assist up to 40,000 patients annually from across the country.