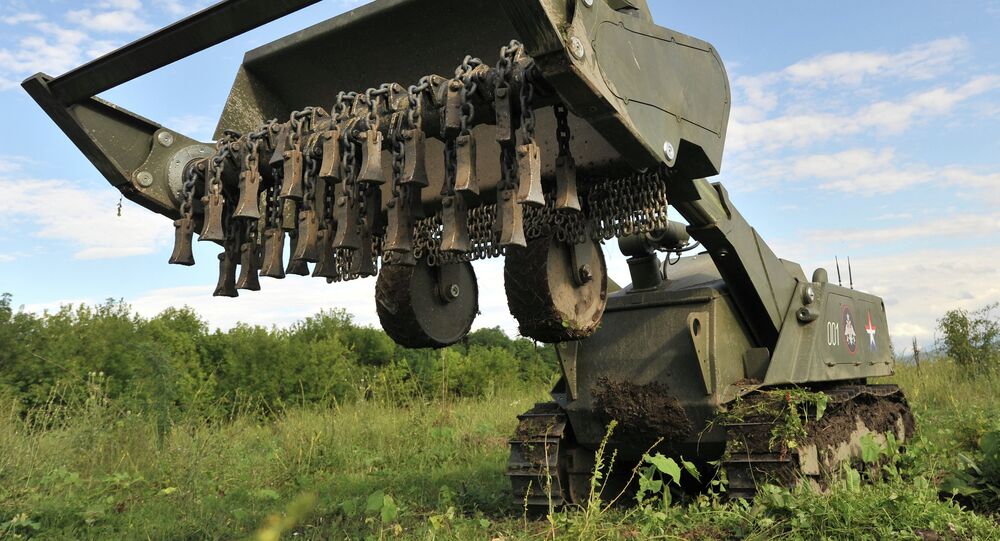 A unique lightly-armored tracked all-terrain vehicle featuring a metallic humanoid torso with arms and manipulators that mimic the anatomical structure of human limbs has been developed in Russia, Izvestia reported.

© Photo : YouTube/ Russian Defence Ministry
Bombs Away: New Russian Robot Offers Remote Demining (VIDEO)
Dubbed “The Specialist,” this one-of-a-kind robot is the brainchild of the Defense Ministry’s Central Scientific-Research Test Center of Robotics. It can easily defuse unexploded ordnance and mines,  perform on-site repairs and even carry the wounded from the battlefield.

“It has successfully passed a series of field tests at an ordnance range in southern Russia, and is already being used there in life-threatening situations,” a Defense Ministry representative told the newspaper.

The robot’s manipulators replicate human palms and even fingers with phalanges which are still inferior to human motor skills.

The “head” consists of two cameras through which the operator can see the battlefield 1,000 meters ahead. It can also rotate 360 degrees in both horizontal and vertical planes.

© NASA . Pixabay
Russia Builds a Supercomputer to Control an Army of Robots
Almost 2 meters tall, 5 meters long and weighing 1.8 tons the Specialist can move over 20 kilometers across rugged terrain with the help of its rubber tracks and 26 hp gasoline engine.

The "Specialist"'s platform also serves as the basis for a unique robot designed to find and move the wounded from the battlefield. It can also measure a soldier’s temperature, pulse and blood pressure and send the data to the operator who decides   whether the trooper is fit to fight on or needs to be evacuated.

“Demining robots have been used by foreign armies for quite some time now, suffice it to mention the British Dragon Runner of the American PackBot, but none of them  deserves to called a sapper,” independent military expert Oleg Zheltonozhko told Izvestia.

He added that these are pretty small units that close in on a mine or other explosive device to assess the danger with the help of an onboard camera.

“Because the manipulators to be found on most of the existing demining robots are fairly primitive, all they can do is get hold of the bomb and move it as far away from people as possible,” Zheltonozhko said.