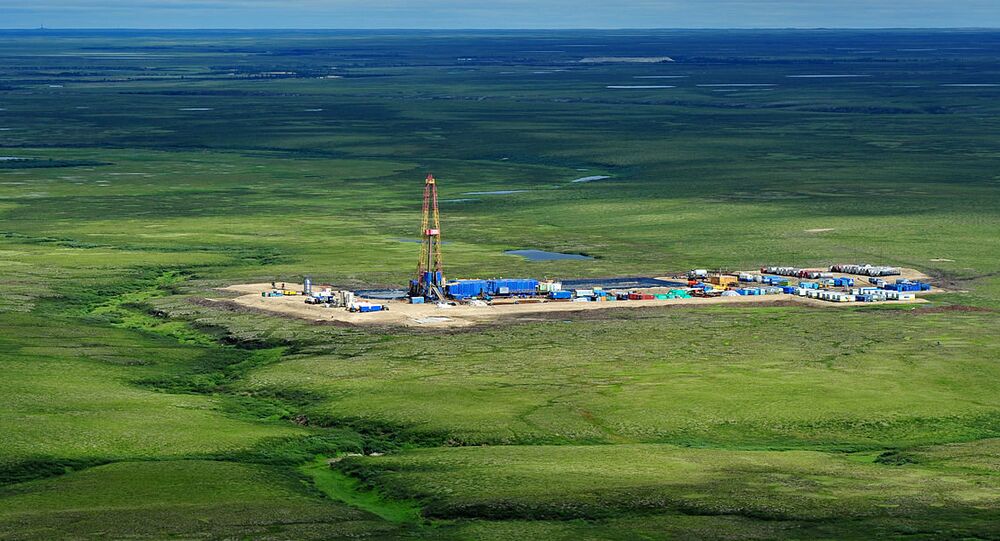 Russia's northernmost land-based oil field - located at Vostochno-Messoyakhsky, began operations on Wednesday. The opening ceremony of what has already been dubbed a major engineering achievement was attended via teleconference by President Vladimir Putin, and by top officials from Gazprom and Rosneft.

Speaking at the opening ceremony, the Russian head of state said that "the economic development of Arctic territories – the launch of new large [oil] fields, became possible thanks to major infrastructure projects," the development of which began in 2010, when the government signed an agreement on the construction of the Arctic-Purpe trunk line, into which oil from Vostochno-Messoyakhsky will flow.

"Through this pipeline, and in the future, via the 'Eastern Siberia-Pacific Ocean' pipeline, oil will go to the domestic and world markets," Putin added. Gazprom CEO Alexei Miller briefed Putin on the project, while Rosneft president Igor Sechin spoke to the president directly from the Vostochno-Messoyakhsky site.

Calling Russia's Arctic energy exploration "strategically important," Miller commended the Vostochno-Messoyakhsky project in its wider context, noting that "step by step, we are developing new gas and oil fields, and building the required infrastructure in this challenging region with enormous potential. This past spring, we successfully put into operation the unique Artic Gate oil-loading terminal, ensuring year-round shipments of Yamal oil. Today, we have launched commercial production from Vostochno-Messoyakhsky, the northernmost of Russia's active oil fields. The new Arctic project will be a key part of Russia's powerful oil and gas complex in the circumpolar North."

© Sputnik / Alexandr Lyskin
About 20% of Russian Hydrocarbon Exports to Pass via Arctic - Expert
Located on the Gydan Peninsula in Yamal-Nenets Autonomous Area in Russia's Arctic, 350 km from the city of Novy Urengoy, the Messoyakhsky oil field required 85 billion rubles ($1.3 billion US) of investment. By 2040, the project is expected to generate 881 billion rubles ($13.6 billion US) in tax revenues.

Several elements make the ambitious project unique. For starters, it was implemented despite the total lack of industrial and transport infrastructure in the area (the nearest settlement – the village of Tazovsky, is 150 km away). This required the delivery of nearly 400,000 tons of cargo to the field by water transport and frozen roads.

Oil from the field, pumped by 50 wells, will enter the Artic-Purpe trunk line through a 98 km long pipeline, which has been heat-insulated to protect against freezing Artic temperatures. The oil itself is heated at the field before entering the pipeline.

Furthermore, the project was completed in record time – pre-development of the field took less than three years to complete. The state-of-the-art equipment at the field includes two power plants generating 90MW-worth of capacity, satisfying all of the on-site facilities' power needs.

Crucially, among the conditions for the pipeline's development was a series of environmental impact assessments, designed to minimize any adverse impact the project might have on the surrounding environment. For instance, the pipeline carrying oil from the site was built on special support struts featuring a temperature stabilization system, enabling the surrounding permafrost to be preserved. Sections of the pipeline that are underwater were built using directional drilling in order to maintain the natural landscapes of local rivers. Finally, special crossings have also been created for local wildlife.

Production is expected to hit its peak beginning in 2020, producing 5.6 million metric tons worth of crude.

About 20% of Russian Hydrocarbon Exports to Pass via Arctic - Expert