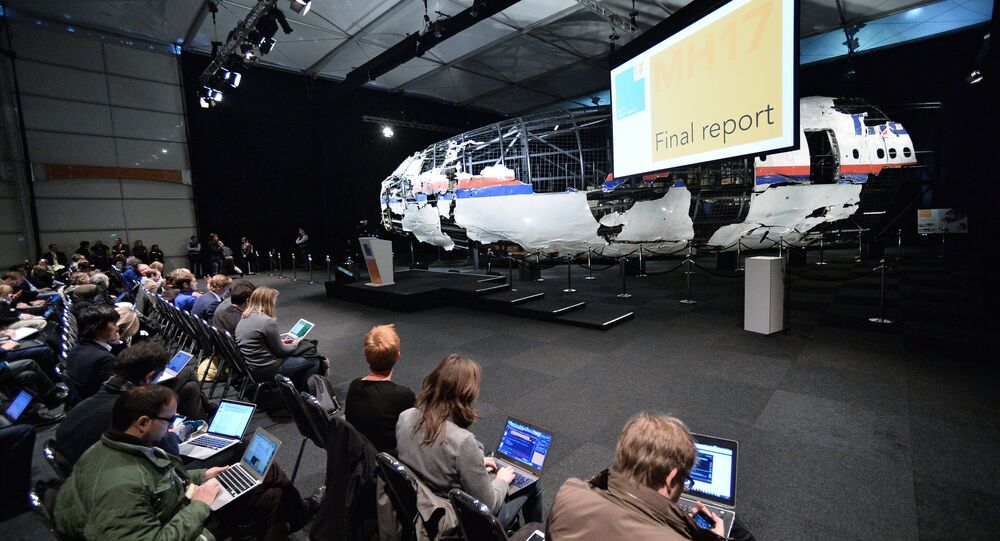 With Dutch prosecutors set to publish the second part of their probe into the July 17, 2014 crash of Malaysia Airlines Flight MH17 in east Ukraine on September 28, a team of Russian volunteers and bloggers have come up with additional facts breaking down the lies and half-truths about that tragedy.

Sputnik earlier wrote about a leaked report about the MH17 tragedy, allegedly prepared by Russia’s Almaz-Antei company, and which appeared in a recent issue of Novaya Gazeta.

The analysis of the Bellingcat investigation shows that from the very beginning the so-called “independent experts” chose followed a pro-Ukrainian version of militiamen’s guilt for the crash. In the introduction of their report the Bellingcat authors unambiguously state that “within hours, the world became aware of the general circumstances that led to the tragedy: a group of pro-Russian separatists shot down the passenger plane with a Buk anti-aircraft missile”.

According to the authors of the “anti-Bellingcat report,” however, this statement actually rules out any need for any further investigation into the crash.

First off, most of the photo and video evidence, used by self-styled researchers, were downloaded to the Internet on the day of the crash, but the authors of these photos still remain anonymous.

Maksim Blinov
MH17 Crash Probe Initial Results to Be Unveiled September 28
Based on so-called “fair evidence” presented by Ukrainian politicians, the so-called independent investigation by Bellingcat advocated the version of US military intelligence officials about the missile launch site of the Buk launcher.

It is worth mentioning, however, that neither before nor afterwards, was there any information about the use of Buk missile launchers by independence supporters.

However, this image was proven to be a fake because three of the vehicles Bellingcat claims were part of the Buk convoy are actually pictured going in the opposite direction of the site the missile was allegedly launched from.

In an interview with Komsomolstaya Pravda, Yuri Kotenok, a leading author of the “Anti-Bellingcat Report,” said that there were lots of discrepancies in the Bellingcat’s version.

“In their July 17 video we see a Buk convoy passing by a gas station in Makeyevka. A good clean road, but in a Hot News  video posted on June 15 we see a road severely dented  by caterpillar trucks we don’t see in the July 17 video. Meaning that in a wartime situation they had taken just one day to fix it! This is a fake, no doubt about that,” Kotenok added.

© Sputnik / Igor Maslov
Kremlin Questions Bellingcat's Report on MH17 Crash in East Ukraine
Thus all Bellingcat claims that the Boeing was downed by a Buk missile transported on a white trailer simply hold no water.

Next, the "Anti-Bellingcat Report" effectively proved that the photo showing the smoke trail from a Buk missile allegedly launched by independence supporters had either been digitally altered or taken on a different day since other photo and video evidence from July 17 have confirmed that the weather in the area was cloudy, not clear, as claimed by Bellingcat.

Yuri Kotenok also said that on July 17, 2014 the sky in the area of the MH17th crash was overclouded and not clear as in the Bellingcat photo.

“This means that you simply couldn’t see any traces of a  missile launch. The Bellingcat photographs provide no particular time frame of when they were made and their volunteers tend to disappear in a very mysterious way,” Kotenik said.

This means that there was no missile launch from Snizhne (an area controlled by independence supporters) and that  the photos of a white smoke trail against a clear blue sky used in the Bellingcat report were forged.

In additional proof of this, Mikhail Malyshevsky, an adviser to Almaz-Antei Concern’s chief designer, flatly denied allegations that the missile that shot down the Malaysian airliner had been fired from Snizhne because in this case the right side of the plane would not have remained intact.

“All they want everyone to believe is that the missile had come from Snizhne, but this is not true because if fired from there it could not have reached the aircraft under that angle. If they agree [that the missile been launched from the territory controlled by Ukrainian armed forces] then their entire version will fall through,” Malyshevsky said.

As to the crucial Bellingcat claim – that MH17 was hit by a single Buk SAM in the hands of the Donbass militia, the report reiterated that this is a practical impossibility, since the detection range of a single Buk is limited to 120 degrees in azimuth and 7 degrees in elevation, and its effectiveness of fire is limited.

A single Buk system can guard only a pre-assigned airspace sector with knowledge of its potential targets' parameters, up to and including enemy flight time (that is, to wait in 'ambush' mode). Without this information, normally provided by support systems elsewhere in the military command, a single Buk is not capable of precisely locating and then hitting its target.

The authors of the "Anti-Belligcat Report" will continue their work to debunk the myths and falsifications being spread by the Bellingcat “experts.”