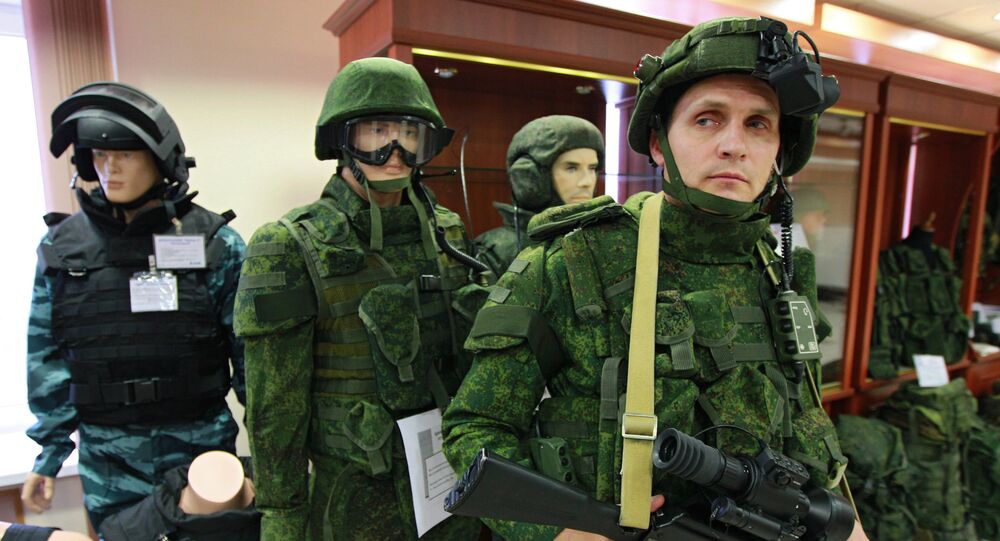 The Russian Defense Ministry and the Russian State Corporation Rostec are developing brand-new bulletproof vests due to be made of ultra-light and high-strength material.

© Sputnik / Grigoriy Sisoev
Russia to Choose Assault Rifle for Advanced Ratnik Combat Kit in Fall – Kalashnikov
Using the newest synthetic materials for producing bulletproof vests will help significantly reduce the weight of these armored jackets which are designed for the Russian Armed Forces, according to the Russian newspaper Izvestia.

The newspaper quoted a Russian Defense Ministry source as saying that research work on the new bulletproof vest comes as part of the development of the Ratnik-3 personal combat uniform kit.

According to a spokesperson for the Russian Defense Ministry familiar with the situation, the research work, which was officially launched in January 2016, aims to create the third-generation soldier equipment using advanced materials.

"In particular, a servicemen's uniform will be made of aramid fiber, while bulletproof vests and protective helmets will be produced with the help of armor ceramics which will contain boron carbide," the spokesperson said.

The new body armor will be used both for Ratnik-2 and Ratnik-3 infantry combat systems, he said, adding that the use of new materials will allow the producer to slash the weight of the bulletproof vest without sacrificing its durability.

"With the current bulletproof vest in its complete configuration, including the protection of the groin, forearm and neck, weighing about 15 kilograms, the new body armor's weight will be reduced by 20-30 percent", he said.

As for boron carbide, an extremely hard boron–carbon ceramic and covalent material used in tank armor, it is already produced by the experimental production enterprises Bifors and NEFS-Soyuz in Russia, according to the spokesperson.

The Ratnik-2 outfit adds significantly to the soldier's combat efficiency and survivability, not least because it's lighter; at 20 kilograms, it weighs just half as much as its predecessor.

Russian military engineers are working out unified combat subsystems where a soldier may act as part of a single structure.

The Ratnik gear helps a soldier maintain stable radio contact and receive continuously updated reconnaissance data about enemy positions and the overall situation in the combat zone, something that makes him an intellectual fighting machine.