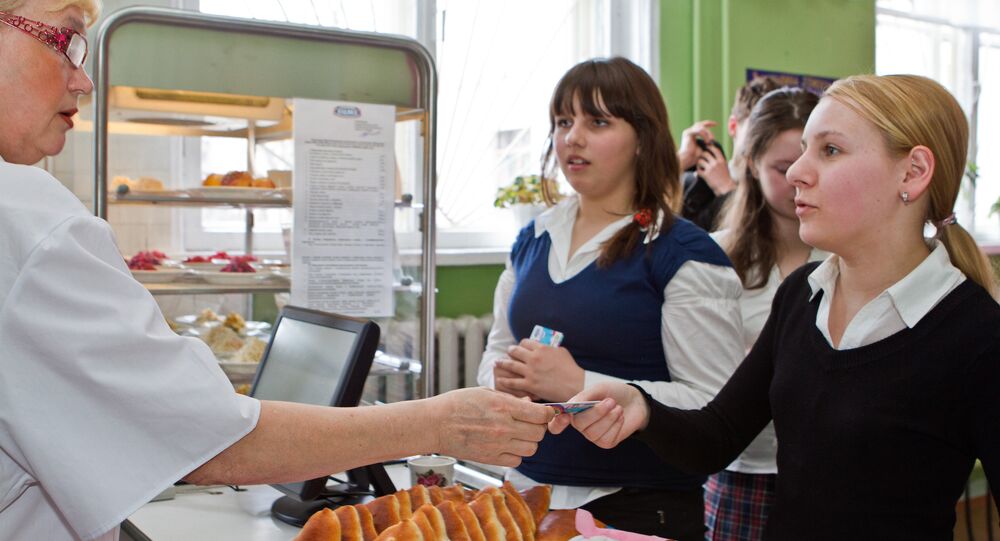 Sberbank plans to launch a biometric system by the end of this year that will allow children attending 150 schools throughout Russia to pay for their meals, according to Igor Mamontov, chief executive of Sberbank's Payments and Transfers Department.

© Sputnik / Mikhail Kireev
Russia's Sberbank Takes Responsibility For Players’ Injuries During Pokemon Go Game
A cashless catering system will be introduced by Russia's state-controlled bank Sberbank in 150 schools before the end of 2016, the head of Sberbank's Payments and Transfers Department, Igor Mamontov, said.

To make a purchase, students simply pick a type of food and place their palm on a scanner at the point of sale, Mamontov said, adding that it will take students only a few seconds to pay for the meals.

He explained that the biometric system reads the vein pattern in one's palm and converts it into a digital code.

A student placing his or her palm on a scanner, and the cost of the meal is transferred from an electronic wallet managed by his or her parents, Mamontov said.

"Using the Ladoshki system, parents will get rid of the necessity of giving cash to their children and they will also be able to monitor the kids' school meal spending by visiting their personal page on Sberbank's website," according to a Sberbank press release obtained by Sputnik.

"Additionally, parents can monitor what exactly their child has eaten and if necessary, they can forbid the child from buying chips or chocolate," the press release said.

© Sputnik / Maksim Blinov
Ranking Higher Education: 22 Russian Universities Rated Among Best in the World
According to the press release, Sberbank intends to significantly expand services related to the Ladoshki system, which is expected to be used for visiting various school circles in the immediate future.

Earlier, media reports said that the new biometric system is already operating in 10 schools, included those located in the capital Moscow, as well as the cities of Voronezh, Ivanovo and Cheboksary.

On August 30, Sberbank, along with MasterCard, the Moscow government and the administration of Moscow State University presented a multi-purpose campus card which identifies students and teachers on the university's territory; additionally, the card serves as a key to the digital services of the university and the city, as well as a means of payment.

Russia’s Sberbank Unlikely to Be Privatized Before 2017 - CEO