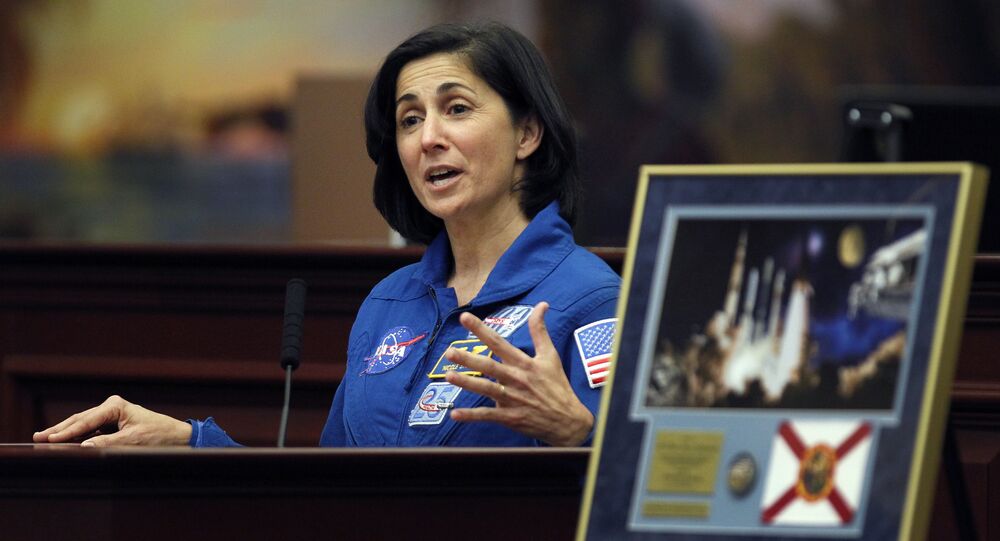 NASA Astronaut Nicole Stott and director of the Arts in Medicine Program at the University of Texas MD Anderson Cancer Center Ian Cion will present the art project of space suit on the event, organized by the Rainbow Art Studio of Eurasian Cancer Foundation (EACF) and the Museum of Cosmonautics.

© NASA .
Log 521: Astronaut Jeff Williams Breaks US Record for the Most Days in Space
MOSCOW (Sputnik) — NASA Astronaut Nicole Stott and director of the Arts in Medicine Program at the University of Texas MD Anderson Cancer Center Ian Cion will present the art project of space suit making for Russian cancer patients on Tuesday at the Museum of Cosmonautics in Moscow.

The event, organized by the Rainbow Art Studio of Eurasian Cancer Foundation (EACF) and the Museum of Cosmonautics, will include a master class on hand-painting the pieces for replica full-sized NASA space suit and the presentation of the project to Russian specialists and the media.

The Space Suit Art Project was launched by Stott and Cion to demonstrate the benefits of arts and science to adults and children fighting cancer. The patients are tasked with hand-painting fabric patterns, which then get stitched together into wearable replica spacesuits at ILC Dover space suit manufacturer.

Two spacesuits, named Hope, Courage, have already been produced by the project, and the third suit Unity production is underway.

The first suit Hope made of more than 600 pieces hand-painted by the patients, their families, and the MD Anderson personnel symbolizes hope for recovery.

© Sputnik / Sergey Guneev
New Astronaut Training Complex to Open at Vostochny Cosmodrome by 2022
The suit Courage was made by MD Anderson patients most of whom were isolated from their families during the course of treatment. The suit symbolizes courage of the patients forced to stay away from the loved ones similar to when astronauts go to long space exploration missions.

The Unity suit will be created from the pieces crated by little patients form around the world, including from Russia, to represent cancer issues, spread awareness and give hope to cancer patients across the globe. The goal of the Unity suit project is to show that a victory over a severe illness as well as a space flight is a difficult physical and emotional test that can be accomplished only by working in team.

EACF is a new Russia-based foundation looking at ways to prevent, detect and treat cancer.

A UK survey published in 2013, reported that 92% of adults with cancer who had used art therapy found it helpful.