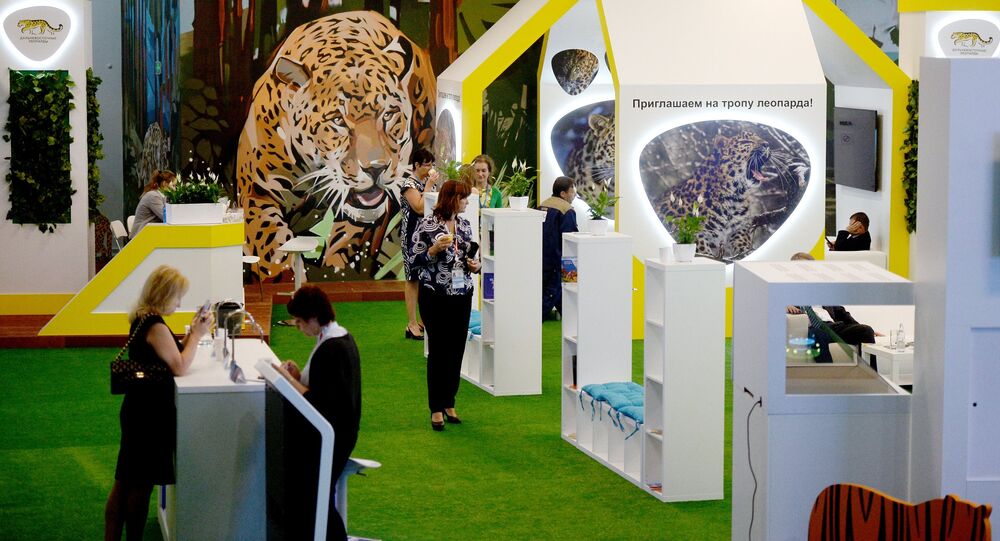 The weather in the Ajax Bay of Vladivostok’s Russky Island changes almost every hour. It’s rainy and windy, but the 2016 Eastern Economic Forum started off just as planned.

Denis Bolotsky — The campus of the Far Eastern Federal University – the main venue of the event, also hosted the 2012 APEC summit, so it’s a familiar place for many guests and foreign journalists. And yet, some things are quite surprising.

Like the Russian Ka-52 “Alligator” scout and attack helicopter that was flown to the embankment a few days ago. Visitors can walk up to the machine to talk to pilots and engineers, and take a photo in front of the cockpit.

Ka-52s are being assembled locally. This gunship was actually flown to #EEF2016 venue straight from Artemyev plant. pic.twitter.com/jRinzgGyr0

​Ilya Rudakov, chief of staff at Primorye’s own Progress plant – a part of Russian Helicopters group which builds the Ka-52s, said “[This] helicopter can be used in wide range of missions: destruction of tanks, armored and unarmored combat vehicles, enemy troops, helicopters and low-flying aircraft on the frontline.”

Nevertheless, the gunship with NATO reporting name “Hokum B” is now on a peaceful mission. It was brought to Russky island to impress the visitors of the forum, where each region of Russia’s Far East shows off its key industries, shares arts and crafts, music and traditional food.

Kolyma is famous for its gold mines, the Republic of Sakha-Yakutia is known for diamonds, Khabarovsk region is rich in natural resources, guests can taste its giant fish and game meat at the forum’s food stalls.

© Sputnik / I. Nosov
Russian Far East, Asia-Pacific Attract Int'l Energy Companies - BP Head
Some local species, however, are under government protection. Among them are tigers and Far Eastern leopards.

On September 2, dozens of people took part in a charity race for the protection of these endangered species, held right next to the forum’s venue on Russky Island. Russian Minister of Natural Resources and Environment Sergey Donskoy was among the runners.

“It was the first time I took part in the race at the Eastern Economic forum. I think both the weather and the atmosphere were good for running. Many of my colleagues were here, some of them won. I did my best to win. Hopefully next year more people will support the cause.”

For some guests of the forum, Russia’s Far East possesses unutilized terrain, and the organizers are working hard to change that.

Robert Whyte, World Bank senior specialist in the area of investment promotion told Sputnik that events like this one give people an opportunity to come together in a different environment, network and to strike deals.

“I have a vision that says if I came back in five years’ time, I would like to see half of these stalls being foreign investors.”

Foreign investments, along with the region’s demographic issues, agriculture and infrastructure will be on the Eastern Economic Forum’s agenda on September 3.