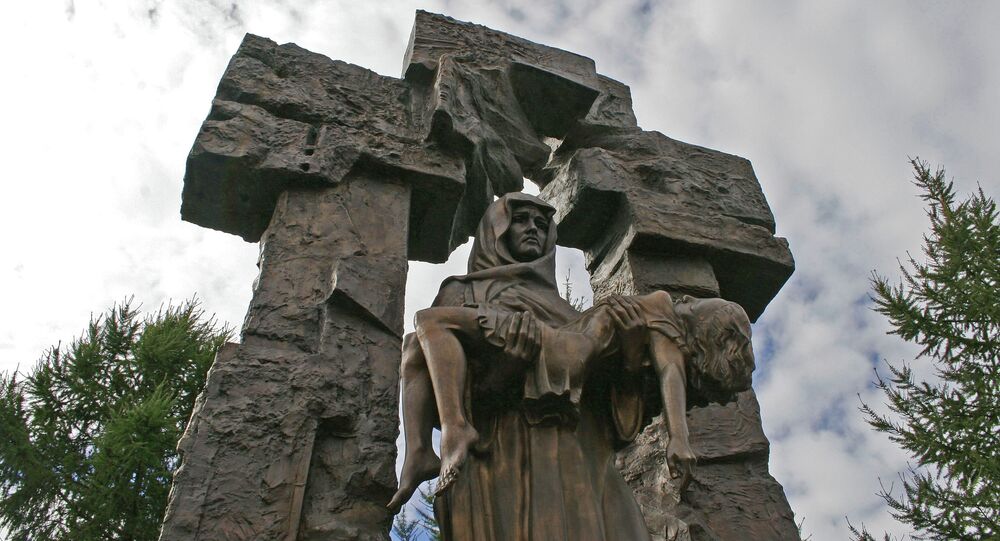 Thursday marks 12 years since the Beslan school siege, in which Islamic extremists captured more than 1,100 people, most of them children, in the southern Russian republic of North Ossetia, leading to more than 330 deaths.

MOSCOW (Sputnik) — Over 30 armed terrorists, including several women, led by Rasul Khachbarov (also known as Colonel) drove a canvas-covered truck into the courtyard of secondary school No.1 in the city of Beslan, in the Republic of North Ossetia-Alania during celebrations dedicated to the start of the school year on September 1, 2004.

Armed men jumped out of the vehicle and immediately started firing automatic weapons over the heads of people in the courtyard, forcing the crowd into the school building. Only a lucky few managed to take advantage of the ensuing confusing and escape.

According to preliminary estimates, 354 hostages were taken. It turned out later that there were many more – 1,116. The vast majority of them were children, including pre-schoolers.

© AP Photo
Beslan Hostage Crisis Toughest Moment of Presidency – Putin
The terrorists herded most of the hostages into the school gym and several other locations in the school. At first, they did not put forward any demands, but soon said that they wanted to see then North Ossetian head Alexander Dzasokhov, then Ingush President Murat Zyazikov and the Moscow Emergency Children’s Surgery and Traumatology Research Institute director, Leonid Roshal. According to some reports, they demanded the withdrawal of Russian forces from the Chechen Republic and the release of previously arrested terrorists.

On September 1-3, Russian presidential adviser Aslambek Aslakhanov, pediatrician Leonid Roshal, representatives of the authorities and public figures attempted to establish contact with the terrorists. Over three days, the terrorists did not put forward explicit demands and refused to accept medicine, water or food for the hostages, or money in exchange for the hostages.

On the third day, the operational staff managed to agree on evacuating the bodies of the hostages killed during the first days of the attack.

A genetic exam was used to identify some of the hostages. The casualties included 10 FSB-led Alpha and Vympel unit troops, two Emergencies Ministry employees and one Beslan resident who took part in the rescue operation.

Most of the special forces troops that died did so while trying to protect children with their bodies.

In addition to wounds and injuries received during the assault, the hostages suffered from a severe psychological trauma. Over the more than 50 hours that the hostages spent in the school, the terrorists did not allow them any water, food or medicine.

Evgeny Biyatov
Pope Francis Sends Letter to Beslan Marking 10 Years Since School Massacre
According to the Prosecutor General's Office, the gang that attacked the school included 32 militants, including two female suicide bombers, whose bombs exploded even before the assault. Only one militant – Nurpashi Kulayev – was arrested during the operation. All of the others were killed.

Kulayev’s trial began in May 2005. He was charged with eight criminal offenses, including banditry, terrorism, murder, assault on a law enforcement officer, hostage-taking and illegally possessing, carrying and purchasing arms, ammunition and explosive substances.

September 6 and 7, 2004, were designated as mourning days in Russia to mark the attack in North Ossetia.

On November 26, 2004, the North Ossetian president signed an executive order, On the Ethical and Moral Situation Surrounding the Beslan Tragedy, according to which September 3 was declared the Day of Remembrance of the Victims of the Terrorist Act in Beslan in the Republic of North Ossetia–Alania in 2004.

On September 1, 2006, a monument to the FSB officers and rescue workers from the Emergencies Ministry who were killed in action during the liberation of hostages in September 2004 was unveiled at the cemetery in Beslan.

Evgeny Biyatov
A woman cries during a commemorative event marking 10 years since the Beslan school siege at the memorial to the victims of the terrorist attack on September 1, 2004.

In July 2010, the construction of the School No. 1 Memorial, led by German architects, began in Beslan. According to the project designers, the school, in which hundreds were killed, would be preserved the way it was found after the attack.

Monuments to Beslan victims have been built in other Russian cities and abroad, in Vladikavkaz, St. Petersburg, Moscow, the village of Kosta Khetagurov in the Karachaevo–Cherkessian Republic and in Florence, Italy.