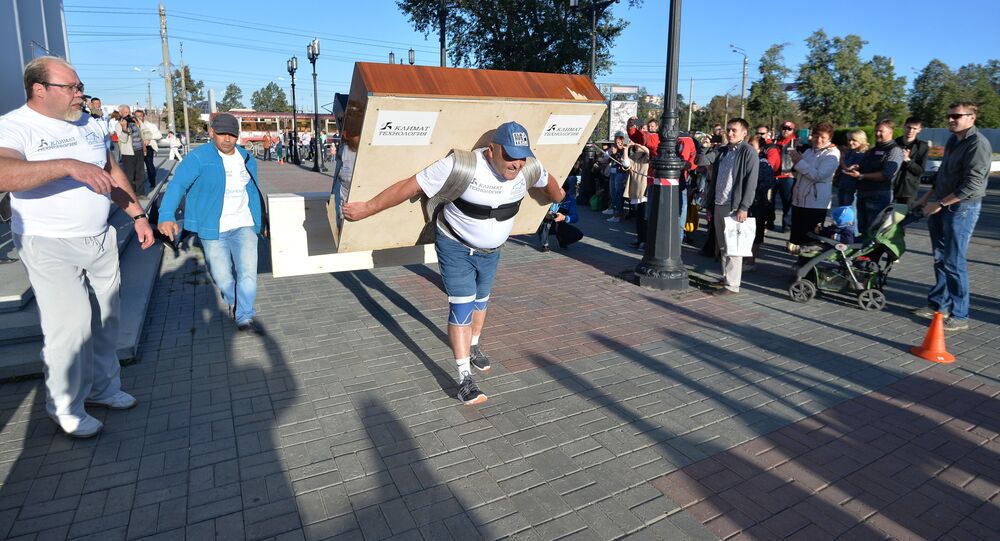 On August 30, a Chelyabinsk powerlifting and arm-wrestling champion Elbrus Nigmatullin performed a record-breaking, death-defying stunt by covering a 100 meter distance with a piano on his back, which weighs three times more than the athlete.

After pulling the 280 kg weight, Russia's most famous strongman Elbrus Nigmatullin dedicated his new record to the 280th anniversary of his home city Chelyabinsk.

According to Nigmatullin, no one had ever attempted this feat of strength before, and it took him three months to train and prepare for it.

Despite looking quite innocuous, carrying a heavy piano is actually very dangerous. This is why the athlete was secured by two assistants on each step of the way. On wrong step and the heavy musical instrument would have squashed Elbrus flat into the tarmac, almost certainly causing spinal injuries. However, Nigmatullin managed to avoid any accidents along the way.

After the deadly stunt, the Russian strongman along with his colleagues performed the famous Russian song ‘Murka', accompanying themselves on the record-setting piano. The musical instrument, which Nigmatullin received from his friend, was then given as a present to a local music center.

The 42-year-old athlete is the four-time winner of Russia's Strongest Man, a runner-up in the World's Strongest Man competition in 2005, and is also a decorated powerlifter and arm-wrestler. Elbrus Nigmatullin is also the proud holder of several records in the Guinness Book of World Records. One of his most outstanding records was dragging a 30-ton two-story house for more than two meters.