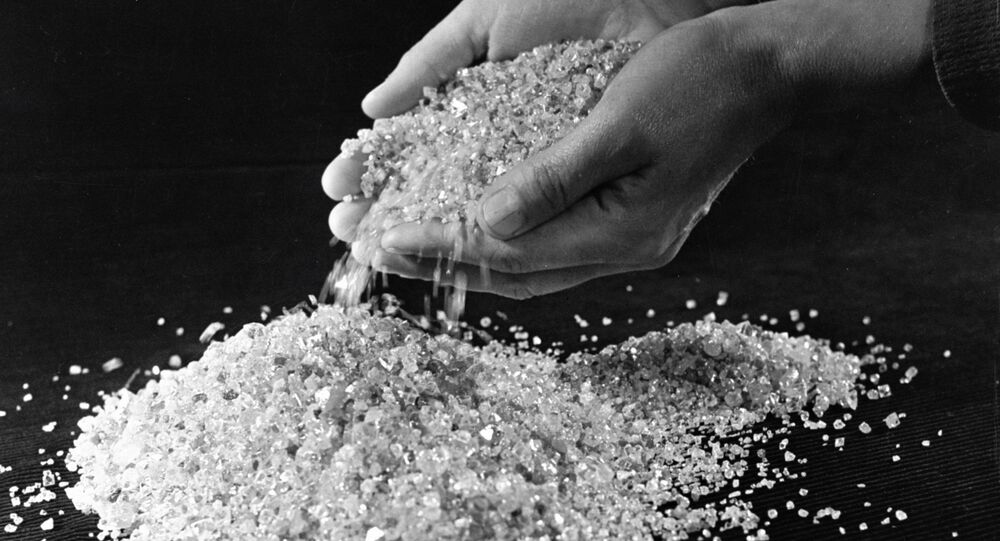 Russia's Alrosa, the world's largest producer of rough diamonds, says it is set to double its sale of precious stones to China and Japan by 2020; Russian economy expert Anton Shabanov tells Sputnik that it might lead to a trade war in the sector, as the current major players in the region are certain to fight for their clients.

Alrosa plans to double the sales of its rough and polished diamonds to China and Japan through its trading platform in Vladivostok by 2020, up to 12 billion rubles per year ($185 mln), according to its Vice President Rinat Gizatulin.

The company’s experts say that it is quite capable of promptly launching its new trading platform in Russia’s Far East and of quickly upscaling its sales volume.

Over the longer term its trade volume through the new trading platform is expected to amount to tens of billions rubles per year.

Russian economy expert Anton Shabanov told Sputnik that the idea is very attractive and the sums are luring as the targeted market is unlimited in volume, especially in China.

He said that the company has always known that China is a very promising client but that it doesn’t sit without rough and polished diamonds and is already buying in the Middle East, which has its own diamond exchange.

“When Russia enters this market with its new platform, it will lead to trade, economic and service wars as the current major players in the region will certainly fight for keeping their clients at that diamond exchange,” Shabanov told Sputnik.

© AFP 2021 / XAUME OLLEROS
Fashion Meets High-Tech: Chinese Maker Creates World’s First Smart Jewelry
He explained that the company has made its mind to enter the market because it understands that the targeted market is quite unstable and it can offer China to capitalize on the platform which is closer, more comprehensible and more accessible.

There is a chance that Beijing will be eager to save the money and will turn to Russia instead of bringing the diamonds from afar.

The expert also said that the price of the offered products will play the major role at first, but it is a wrong factor to bet on, because the lower is the price, the lower income the company will get.

He noted that even though Alrosa is one of the world’s major diamond players, China has not yet found a common ground with it. It has been buying from everyone in the market.

However there is a chance that if it chooses one large vendor it will get more attractive conditions due to its large sales volumes.

This particular product is of high demand as it is not only jewelry industry which is buying tonnes of it, but it is also used in high-quality production, where not only its preciousness and beauty matters but its technical characteristics are also valuable. For example, for lasers.

Taking into consideration that laser technologies and everything that is connected with them are now developing rapidly and are being applied in different industries, including neural computers, this is a fast growing market with the steady demand, Shabanov said.

The demand is only expected to grow further. And China is one of the world’s leading economies and it will certainly keep in track.

© Sputnik / Alexander Liskin
Shining Despite Sanctions: The Secret to the Success of Russia's Diamond Producer
Earlier this year Alrosa Supervisory Board approved the decision to open a branch in Vladivostok, near the border with China.

It is the first step on the way to creating Russian Diamond Centre in the Russia’s Far East, in Primorye Territory in a bid to increase sales to Asia-Pacific nations and improve cooperation with companies in the region.

The branch is also in charge of the search for potential partners and investors to set up manufacturing facilities for the use of industrial grade diamonds and production of equipment for diamond cutting industry.

Alrosa will also use the branch to “collect information about the Asia-Pacific region from the point of view of the company’s interests.”

The launch of the Vladivostok special economic zone in October 2015 and relaxed visa requirements for foreign citizens were among the factors prompting it to open a branch in Vladivostok, the company added.

Last week the company already opened an international auction of raw diamonds of special sizes with the weight over 10 carats and a diamond tender on the verge of the second Eastern Economic Forum, which is set to be held in Vladivostok on September 2-3.

"Auctions are held on the verge of the second Eastern Economic Forum from August 23 to September 3 on the Russky Island in Vladivostok. 19 lots of diamonds with the total weight of 1,098 carats will be offered. The largest raw diamond on the auction has the weight of 401.97 carats," the company said.

© Photo : Rio Tinto
Extremely Rare Violet Diamond Worth Millions Discovered in Australia
A tender of 28 polished diamonds is being held at the same time. A round, 40.25-carat diamond is the largest on show. Five of the diamonds weigh more than 5 carats each and 18 are fancy colored.

It is the first time Vladivostok is hosting such trading. Thirty companies from Hong Kong, Israel, India, the United States, Belgium, and Russia are set to attend the review.

In the future, it is planned to open the Eurasian Diamond Centre in Vladivostok, which will be located in the old airport building. The new center will have a customs terminal, an Assay Chamber office and a representative office of Gokhran.

According to Alrosa, the diamond center premises will also host a repository for precious metals and stones, a diamond cutting unit and trading floors.

It is expected that the new center will start operating at full capacity in 2017, the representative of Alrosa Group said.