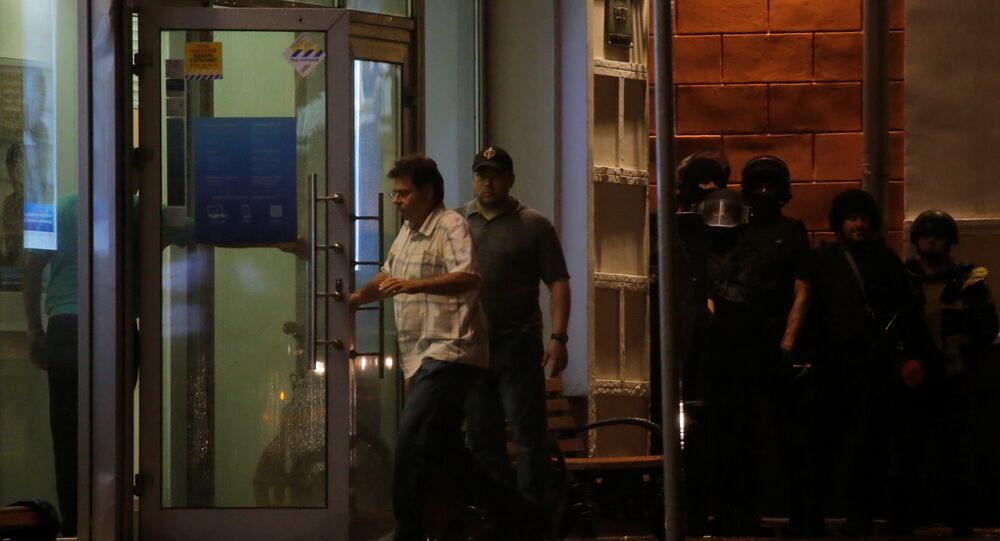 Man Takes Hostages in Bank in Central Moscow, Threatens to Blow Up Building

A man took hostages in a bank in central Moscow, he threatened to blow himself up. A SWAT team was deployed. Later, all hostages have been released. The man surrendered to police.

Four people were held hostage in a bank in central Moscow, a law enforcement source told RIA Novosti on Wednesday. Later, the man released all the hostages.

The assailant has surrendered to the police, a security source told RIA Novosti on Wednesday.

"The assailant who seized the bank has surrendered to the police," the source said.

Snipers on the building have been placed in operational readiness, a police source told RIA Novosti.

"The man is holding four employees of the bank," the source said.

"Today, at 18:45 a man entered the bank office at the Nikitskaya street. An unknown object was attached to his head. Presumably, three people were in the office", police told RIA Novosti.

Police are in talks with a man with a yellow box on his neck, who is threatening to blow up a Citi bank branch in Moscow, a law enforcement source told RIA Novosti.

"The negotiations are underway," the source said.

Armed police cordon is at the scene, along with a bomb squad.

According to Life News citing an eyewitness, the man who has taken hostages, is about 60 years old.

Prior to the hostage situation, a video with a message of the alleged gunman appeared online, RIA Novosti reported.

A source in the police told RIA Novosti that the hostage taker may be a bankrupt businessman, Aram Petrosyan.

The video message was posted on August 24. "Today, on August 24, 2016, I will carry out a… resonance violation of the Criminal Code of the Russian Federation", the man said.

He said that he intended to commit a crime due to bankruptcy and urged the Russian authorities to create a body that would deal with the issue of bankruptcy.