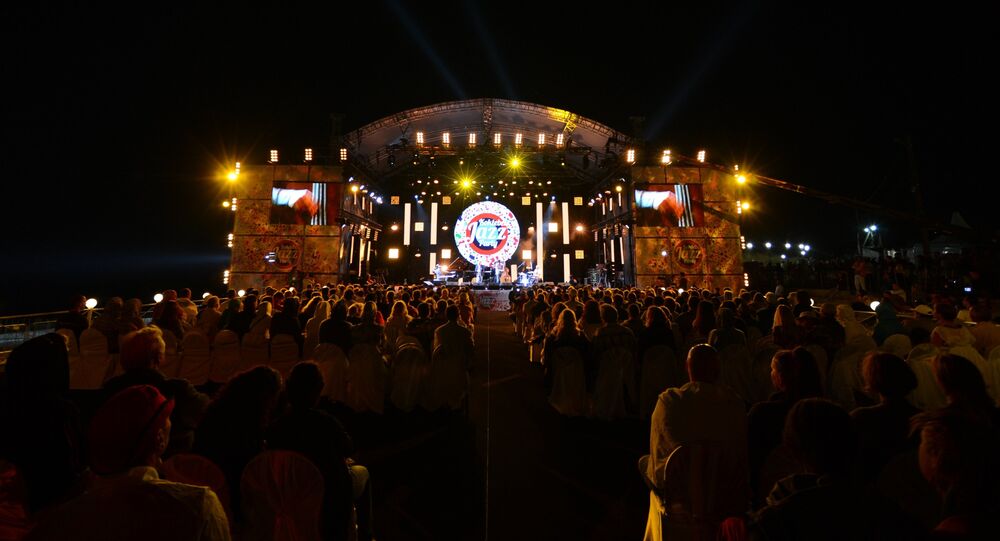 Jazz musicians from more than 15 countries are due to perform at the Jazz Party festival that will take place in Koktebel, Crimea, on August 26 – 28, the festival's press service announced.

MOSCOW (Sputnik) – A total of 14 musical groups will perform at the festival. The event will also include a unique jam session by bands in Russia and leading jazz musicians in the United States and Israel, performing via a direct video link-up.

"This year the Koktebel Jazz Party will be again held on the Main Stage and the Voloshin Stage. The program will be more jazzy and attractive, and will include several nice surprises. I'm sure we'll satisfy you," Koktebel Jazz Party Art Director Mikhail Ikonnikov said.

The festival will open with a performance by the Tula Big Band headed by Sergei Golovnya, a well-known Moscow saxophone player and art director of the Koktebel Jazz Party. The first day will also include performances by the international blues band JB and 24 Kopeks from the United Kingdom and Russia, a band from Japan, and the Yakov Okun international band with musicians from Spain, Belgium, Germany, France, and Russia.

© Sputnik / Евгений Биятов
Rossiya Segodnya Director General Opens Koktebel Jazz Party in Crimea
The second day of the festival will start with a performance by Mambo Party, a collective of musicians from Russia and Cuba. On that day, guests of the festival will also be able to enjoy China's Li Xiaochuan Jazz Quartet, the Dixie Brothers Band from Russia's Rostov, Tribute to Benny Goodman from Finland and Russia, and the East-West Connection band that comprises musicians from Germany, South Korea, Mongolia, and Russia.

Famous Soviet-era and Russian jazz piano player Igor Bril and his sons Alexander and Dmitry will open the third day of the Koktebel Jazz Party. The established program called Jazz at the Speed of Light will show that jazz cannot be stopped by borders. A jam session with musicians playing together being thousands kilometers apart will also serve as a sign that music is a tool for connecting people. The third day will finish with a performance by The Legends of Brazil, a US band.

The second stage called the Voloshin Stage located in the house museum of the early 20th century Symbolist poet Maximilian Voloshin will host a Jazz Master Class where young musicians will be able to play alongside famous masters from Russia and other countries. Guests of the Voloshin Stage will also be able to enjoy performances by jazz bands and a jazz lecture by journalist and culture expert Pavel Surkov.

"Crimea held its first Koktebel Jazz Festival in 2003. I was lucky to be its co-founder together with my Ukrainian friends Lilya Mlinarich, Vladimir Solyanik and Kirill Vyshinsky. The musicians and us all lived in tents and enjoyed fantastic jam sessions at the foot of the Kara Dag Mountain after the main program was over. Since then, jazz has rocked Koktebel every fall. I am glad to welcome all the fans of its magic to Koktebel Jazz Party this year. Welcome to the 14th jazz season in Koktebel!" Rossiya Segodnya Director General Dmitry Kiselev said in an address.

Koktebel: A Slice of Paradise in Crimea