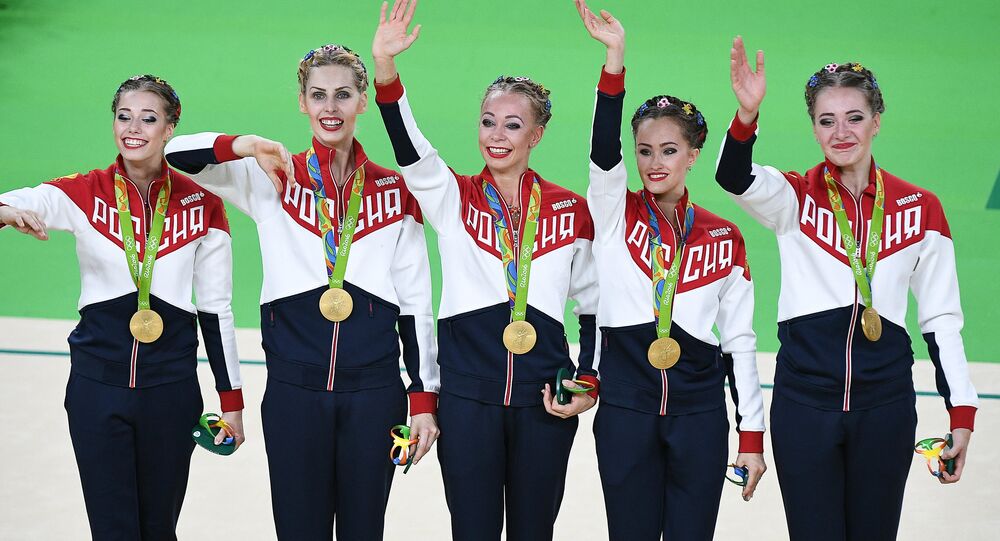 Russian Olympic Kit Becomes a 'Must Have' Fashion Item

What was the greatest triumph of the Rio 2016 Olympics? Was it Great Britain’s spectacular cycling results or Usain Bolt’s treble-treble? While both were amazing, they simply can’t compete with the style of the Russian Olympic team’s kit.

For sure, the Russian Olympic team had its difficulties during the games. Over 100 competitors were disqualified due to unproved evidence of a systematic doping program. But, at the end of the day, this is not of great importance. What actually matters, are their perfectly fitting suits.

“’Gold’ Olympic flight took off from Rio with a 4 hour delay. Today, our athletes can be met at Sheremetyevo Airport at 8pm. We are waiting for you, champions!”

This year is an absolutely victory for Russia. Not since the fictional Ivan Drago, with his blonde hair and perfect jawline, has Russia looked so good in the spotlight. Especially after 2012, when the whole world derided Russia for its awful Olympic fashion sense.

For the Rio Olympics, the team had prepared better. The design was developed by the Russian sporting goods designer Bosco. The idea behind the uniform dates back to Russian Constructivism.

The uniform is presented in the colors of the Russia flag. It maintains a single retro-themed style, without any unnecessary patterns or other additional decoration. The uniform is the perfect blend between the sought-after sportswear of the 90s and the West’s Post-Soviet fascination.

“Get into the Russian Olympic team’s uniform.”

It seems the Russian kit has also become popular sports fans from around the world.

“I even asked to some Russian guys in Rio about it last weekend and they said to me that the only way to buy it is in Russia,” a Reddit user commented with some desperation. “I found some people selling it on eBay but for a really high price. Is there any other way of getting it? I really don't know where to ask.”

In addition to the tracksuits incredible appearance, they also provide some protection against the Zika virus.

“Because of the [Zika] virus,  the design of our athletes’ kit for the Games has been altered, and each and every necessary measure undertaken. For example, we have extended the sleeves, so the risk of being infected by the disease would be close to zero,” explained a Russian Olympic spokesperson.

“20-year-old freestyle wrestler, Abdul Sadullayev, fighting in the 86kg weight category, brought Russia another gold. The athlete won the fight against Turkey’s Selim Yasar, with a score of 5: 0. We send sincere congratulations!”

While Russia ended up only fourth in the overall medal’s haul, it was still able create a moment of “sporting brilliance” by making probably its best ever sports kit!

Olympic Beauty: The Most Attractive Female Athletes of Rio Games 2016