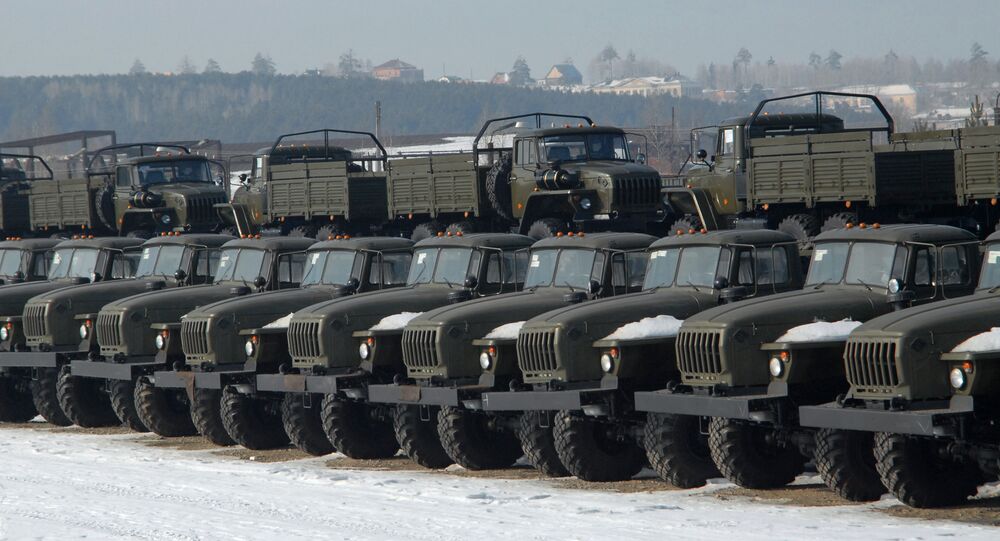 Russia plans to auction off a wide variety of military equipment and clothing, in a move aimed at liquidating mothballed army goods in a push to modernize, according to RIA Novosti.

© AP Photo / Alexander Zemlianichenko
High-Tech Face Off: Russia's New 'Super Tank' Armata Vs US-Made TOW Missiles
The Russian Defense Ministry is preparing a large-scale sale of mothballed military equipment and clothing within the framework of the Army 2016 forum; more than a hundred relevant auctions are due to be held for the purpose, RIA Novosti reported.

A full list of auction lots is available in a catalog that has been published on the Russian Defense Ministry's website.

Potential buyers can find out the name of the property offered for sale, its amount within a specific lot, the production year, the item's condition and level of wear, its location and initial price, as well as the size of the mandatory deposit and the format of the auction.

A whole array of army trucks are slated to go under the hammer, including the ZIL-131, produced between 1975 and 1985. The starting price during next month's auction is expected to range from a mere 16,000 to more than 200,000 rubles.

Other trucks to be auctioned off include the GAZ-3308 and GAZ-3307 as well as the Ural-4320. Interestingly, in addition to trucks, a VAZ-21140 passenger car will also be sold, according to RIA Novosti.

It is worth noting that most of the lots will be sold in wholesale quantities, and that potential buyers will have to transport the equipment or the clothing all by themselves from the auctions, which are due to be held in Moscow and other major Russian cities on or after September 6.

For example, at the September 10 auction, 150 khaki-colored quilted jackets will go on sale with bids beginning at 29,100 rubles. Also on auction will be ten pairs of box calf shoes for a starting price of 1,730 rubles.

© Sputnik / Vladimir Astapkovich
Manufacturing of 1st Armored Ural-VV Vehicle for Russian Army Set for 2016
Applications to taking part in the auctions can be submitted until September 1, to the offices of the Russian auction house based in several Russian cities.

In late June, President Vladimir Putin said that Russia faces a whole array of risks, including those near its borders, which is why a strong army with modern weapons guarantees the country's sovereignty and territorial integrity.

"A strong army equipped with sophisticated weapons guarantees Russia's sovereignty and territorial integrity. It also guarantees that millions of our fellow citizens can live in peace. I am sure you understand it quite well," Putin said during a reception honoring the graduates of Russia's higher military educational establishments.