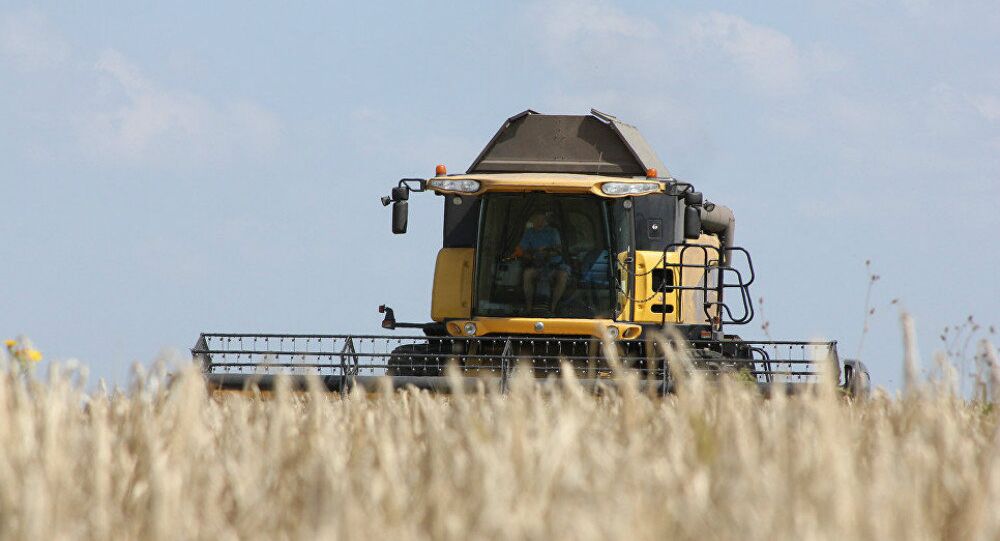 Russia's high-quality food produce is proving to be hit with importers in the Middle East and elsewhere, as the agricultural industry reaps the benefits of sanctions and an increased investment.

© Sputnik / Anton Denisov
Two Years On: How Russia's Agricultural Sector Reaps the Benefits of Sanctions
Following another bumper harvest, Russia's farmers are seeking even more favorable conditions as the country's grain production is forecast to outstrip all rivals for a second straight year.

Last week the US Department of Agriculture published its global projections for 2016/17, which predict that Russia will become the world's largest wheat exporter for the first time, harvesting a crop of 72 million tons.

On Saturday, Russian farmers told RIA Novosti that they are keen to export even more agricultural products, and explained why their produce is popular with consumers.

"Our land is the cleanest of the large agricultural nations," explained Gennadiy Divavin, a farmer who employs 15 workers on his farm in Russia's Kursk region, which produces grain and other foods.

"After all, in Soviet times powerful chemicals were hardly used – herbicides, fertilizer – and the land wasn't spoilt. That's why we need to focus on ecological products," he said.

© Sputnik / Kirill Kiryanov
Russian farmer Gennadiy Divavin
Divavin said that sanctions have been a boon for Russian exporters, who are investing their profits in new equipment to meet the rising demand.

"Of course, sanctions have been a huge help. If they are stopped, everything could change very quickly. (For example) they imposed an embargo on American soybeans, and immediately everybody switched to lupins, which grow well here. Just over the last two years, in the Black Earth region of Russia, several factories have been built for the processing of lupins."

"I get five calls a week asking me how the harvest is, there is very high demand. The sanctions mustn't be lifted under any circumstances! We can provide everything ourselves, in two or three years we will have everything covered. At the moment, there a bit of a lag in the cattle industry; they need some help from the government. The production cycle for meat and milk is very long and there are serious costs, cowsheds, milking machines and so on. A cheap long-term loan is necessary," Divavin explained.

Market analyst Kirill Yakovenko of Moscow-based Alor Broker explained that sanctions and government subsidies for the agricultural industry have enabled farmers to take advantage of this year's favorable weather conditions.

© Sputnik / Kirill Kiryanov
A worker in the granary on Divavan's farm

"Sanctions played into the hands (of Russian producers), and stimulated the Russian agricultural market, while subsidized loans enabled the opening of new production facilities," Yakovenko told the Russian newspaper Vzglyad.

"The record exports are explained by the record demand for Russian wheat, which has become cheaper because of the change in the exchange rate," Yakovenko said.

In 2015/2016, Russia was the world's largest wheat exporter by country, its exports exceeded only by the European Union. In 2016/17, wheat production in the EU is forecast to decline by nine million tons due to excessive rain in key growing regions, particularly in France.

Russia's export of the grain is expected to rise by 4.5 million tons over the coming year, reaching a record 30 million tons.

While North African and Middle Eastern nations are traditional importers of Russian wheat, countries in the region are increasingly switching from suppliers in the US, Canada or Australia. For example, Russian suppliers recently agreed a new contract to supply the Egyptian market.

In addition, cheaper transportation costs mean that countries as far as South Africa and Mexico, which has traditionally been a US wheat buyer, are buying Russian wheat, the FT reported on Thursday. This year's wheat harvest in the US is of questionable quality, because though cool and wet weather have increased yields, protein levels in the wheat have fallen.