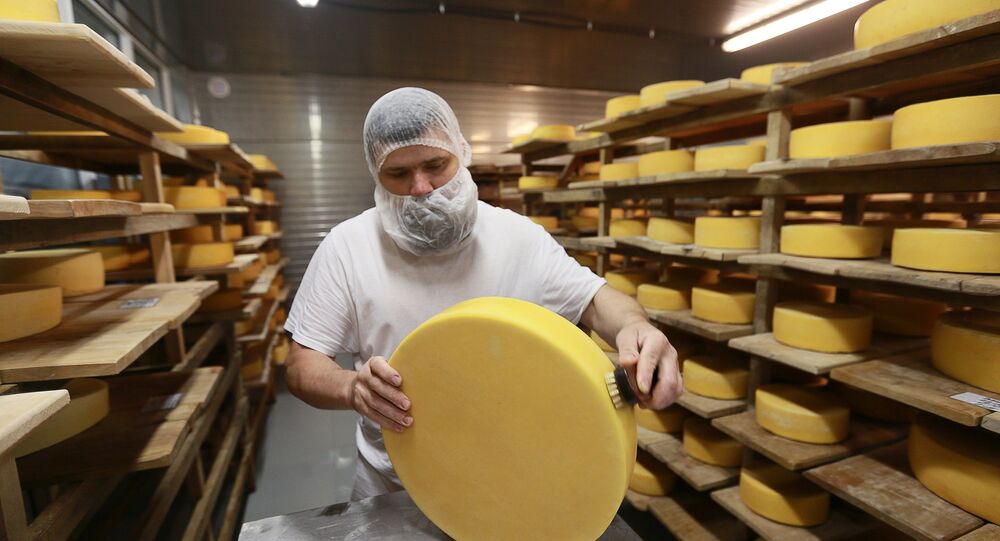 Sanctions may have influenced certain parts of the Russian economy, however, Russian farmers have benefitted immensely from the import ban. influenced the deterioration of life in Russia? Cheesemaker Oleg Sirota explained the pressures of the food embargo.

Cheese company "Russian Parmesan" is a product of the Russian food embargo. It was established a year ago by Oleg Sirota after he sold his property and moved to the countryside so that he could pursue his dream of cheese making.

“I always dreamed of a farm and after ending school, I attended an agrarian university but left it half way through. At the time, I did not see any prospects in agriculture. So I decided to attend IT courses and ended up with quite a large company with good earnings,” said Sirota.

However, his dream never left him and when the embargo was levied, he decided it was the perfect time to pursue it.

“I came to the head of Istra district with three business plans and promised to run the project. A year later I was able to receive municipal land for 49 years. Conditions for rent are just great — only 8,000 rubles (123 USD) per year,” explained the farmer.

Oleg Sirota sold everything he owned to start his business, raising 12 million rubles total. However, this large sum of money only lasted him a year.

“In any startup, you come across a situation when funds run out. So I opened pre-orders for cheese and in the end collected 8 million, on which I was able to complete the project,” said Oleg.

Two problems at the creamery

Yet Oleg does not own a cowshed and has to order milk from other farmers. Finding high quality milk in Russia has proved to be a hard task for him.

“I threw away more than 3 tons of cheese because of milk quality. In Russia, there is no culture of hard cheese production, and therefore, no right milk for it,” said Oleg.

The availability of loans has been another problem for him. Agricultural equipment can be leased at two or three percent, while cattle by one and half. However, banks lend at 23 percent.

“It is absolutely crazy!” claimed Oleg. “Small agricultural enterprises rarely get any support or loans. As a rule, they are given away to major agricultural holdings. So before I attain any investment, it will be difficult to further compete with German farmers.”

On the extension of the embargo

Oleg feels positive about the food embargo. He plans to expand production but if sanctions are cancelled, demand for his cheese will fall.

“We plan to increase cheese production by 10 times in eight months. Now we produce about 100 kg of cheese per day and we want to increase in until 1 metric ton. Demand for our product is crazy,” explained Oleg.

Also Oleg Sirota even wrote a letter to the President about extending the food embargo.

“We asked not to cancel sanctions as many projects are planned around these circumstances. Otherwise it will turn into a tragedy. All farmers will lose money and more,” said Oleg.

By the end of this year, Sirota plans to be able to produce 400 kilograms of cheese per day, as well he wants to build a tasting room, a cowshed and a museum.

“I want to revive Russian cheese making traditions. For this reason only I want to construct a museum. Few people know that 100 years ago the Russian empire exported Cheddar to England, Emmental to Sweden and Tilsit cheese to Germany. Unfortunately, cheese production culture was lost due to the times of the 20th century,” said Oleg.

Long time ago, Russia was famous for the production of “Meshchersky” cheese, a type of Emmental. But during the revolution the last cheesemaker was killed who knew the recipe.

“The good news is that I found his descendants in Sweden, and we will restore the recipe together,” exclaimed the farmer.