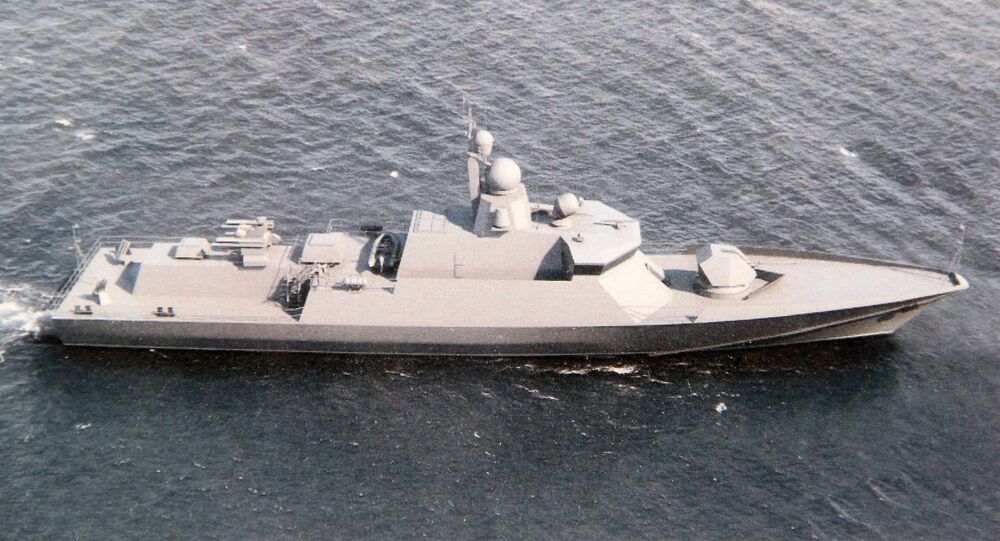 The Black Sea Fleet is expected to receive a batch of five new Project 22800 'Karakut' ('Black Widow') warships, classified as both 'small missile ships' and 'small corvettes'. Commenting on the prospects for the new vessels, military journalist Boris Stepnov suggested that the new ships will allow the Navy to turn the Black Sea into a fortress.

© Sputnik / Igor Zarembo
Russian Navy to Receive Over 40 Ships in 2016 - Defense Minister
The Zelenodolsk Plant shipyard has received another order, this time for five small multipurpose Project 22800 missile ships. The next-generation vessel has a displacement of 800 tons, is 65 meters long, 10 meters wide, and has a draught of 4 meters. The vessels have maximum speed of 30 knots, a cruising range of up to 2,500 nautical miles, and can stay at sea for up to 15 days at a time.

By all indications, the new vessels will be assigned to the Black Sea Fleet. The first of them will be handed over to the Navy in 2018, the last in 2021. The ships, equipped with Kalibr cruise missiles, are designed to complement the Project 21631 Buyan-M ('Brawler') missile ships, also built at Zelenodolsk. The latter vessels, also a recent development, are designed specifically for the Caspian Sea and the lower reaches of the Volga.

Commenting on the defense order in a piece for the independent news and analysis hub PolitRussia, defense commentator Boris Stepnov suggested that compared to the Buyan-M, "the Karakut is more seaworthy and has a number of tactical and technical advantages."

"For instance, to protect themselves from enemy air power, the Buyans feature a 30 mm Ak-630M-2 Duet machine gun, which is adequate for use on rivers and in the Caspian. But operations at great distance from its home territory require more powerful protection. The Karakut is equipped with the Pantsir-M," a naval version of the Pantsir-S1 combined surface-to-air missile and anti-aircraft artillery system produced by the KBP Instrument Design Bureau.

It's known that the Karakut uses the 3S13 launcher, allowing the vessel to use both the Onyx anti-ship and Calibr-NK cruise missiles.

topwar.ru
Area covered by the Kalibr-NK class cruise missiles based on maximum range; the circle on the left indicates range from the Black Sea, the circle on the right that of ships in the Caspian.
Pointing out that the cruise missiles onboard have an effective range covering much of Europe and most of the Middle East, the journalist suggested that while "the ability to 'Kalibrate' the enemy from a distance…is certainly important, it is not the direct function of small corvettes. This class of ships is used for escort and patrol missions, for anti-ship warfare and to defend the airspace around naval bases. They are not destroyers of course, but for tactical operations, they are optimal."
© Sputnik / Vasiliy Batanov
'Russian Navy is Back': French Lawmaker Impressed by Fleet Day Parade in Sevastopol
At the same time, the ships' modular design allows for the construction of several different versions. "It is logical to assume designs including a 'shock unit', a patrol vessel and an anti-ship model. The order we are discussing obviously does not apply to the anti-ship modification, but is great for patrol functions, which are extremely important in the waters of the Black Sea. With a speed of 30 knots, the Karakut is a sufficiently fast ship, and will be able to cause serious problems for the enemy with the help of its P-800 Onyx medium-range anti-ship missiles."

Meanwhile, Stepnov added, "the ship's 100 mm automatic naval gun (likely to be the A-190 Burevestnik) has implications for any conflicts over water boundaries; here we can recall the feat of the Bezzavetniy and SKR-6, which successfully kicked the American cruiser USS Yorktown and the destroyer USS Caron out of Soviet waters in 1988, after these ships blatantly cruised 7 miles into our territorial waters."

The Karakut may be small, but will certainly be able to "bite" even cruiser-sized vessels, the journalist suggested.

"At the same time, small missile ships are suitable for patrolling precisely due to their small size, which provides for a low profile and high maneuverability. Therefore, the Karakut is effective both as a patrol vessel, and as a platform for the Kalibr, which does not fall under any international restrictions on the limitation of missile weaponry."

Ultimately, Stepnov noted, "Russia, as usual in recent years, is building weapons which are of very high quality from the technical standpoint, but also very practical in terms of their application."