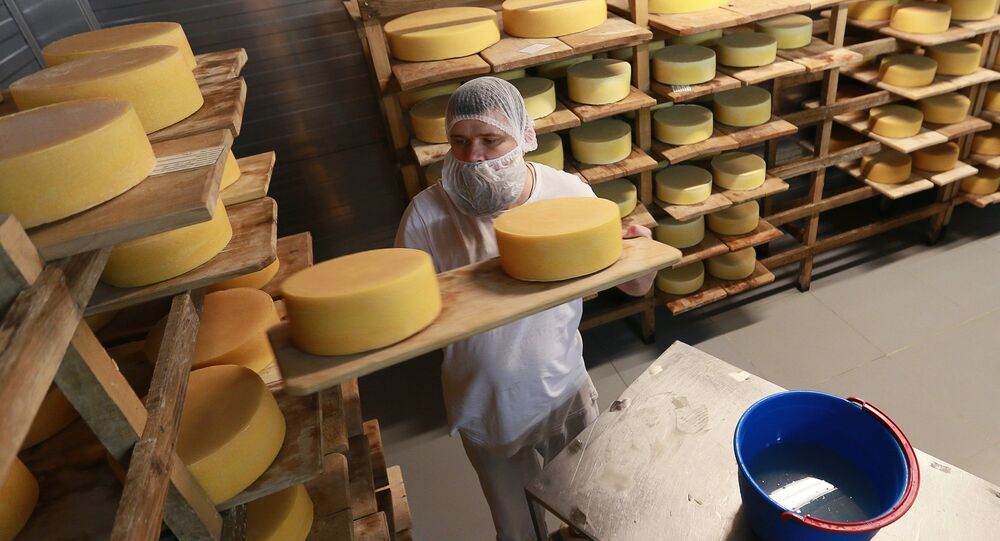 On the two-year anniversary of Russia's counter-sanctions against Western food products, its agricultural industry is going from strength to strength.

© AFP 2020 / TIMOTHY A. CLARY
Economic Sanctions are Wall Street's 'Instruments of Destabilization'
After the US, EU and a handful of their allies imposed a series of sanctions against several major Russian companies following Crimea's decision to join the Russian Federation in March 2014 in the aftermath of the Maidan coup d'etat, Russia retaliated by launching its own sanctions on August 7, 2014. These affected the import of certain food products, such as cheese and produce.

The counter-sanctions have had a negative impact on Western food producers: European farmers in particular have lobbied their governments to lift sanctions against Russia.

At the end of July, the regional parliament in Piedmont made it the fifth Italian region to approve a resolution calling for anti-Russian sanctions to be lifted, under pressure from local farmers.

In addition to this political aspect, the Russian counter-sanctions were intended to stimulate Russia's agricultural production, which constitutes around four percent of Russia's GDP.

Last year Russia's agricultural industry recorded annual growth of 3 percent, and grew by another 2.6 percent (annualized) in the first half of 2016.

The Industrial Development Fund was set up to provide loans to companies seeking to modernize their equipment, or substitute products which are currently imported.

In October 2014 the Russian government approved a two-year "road map" on import substitution for Russia's agricultural sector, which included developments in infrastructure and logistics, and the regulation of customs tariffs.

© Sputnik / Filip Klimaszewski
Anti-Russian Sanctions: EU is 'Victim of Economic War Waged by US'
In August 2015 the government announced the approval of 464 agricultural investment projects, including 166 to modernize dairy farming and processing, and 197 for the meat or poultry industries.

On Friday Tatyana Radchenko, deputy head of the Russian government's Analytical Center told RIA Novosti that during 2014 and 2015, Russia's production of meat and poultry rose by an average of ten percent, the production of cheese products rose by 10.6 percent and butter by 3.2 percent.

The analyst sought to allay fears that such success might be undone, if the sanctions were to end.

"Firstly, Russian consumers have switched to domestic and Belorussian brands, which have strengthened their share of the food market. Secondly, retailers have agreed on contracts with new suppliers for products," Radchenko said.

"Switching back to the previous foreign suppliers will only be possible if they propose lower prices, which is hardly possible with the current exchange rate."

"It seems unlikely that there will be a crisis of overproduction in countries under the embargo, which would lead producers to significantly decrease their prices," Radchenko said.

"The main partners were machine-building companies, producers of energy and transport machinery, petrochemicals, metallurgy and I would like to particularly emphasize, agriculture," Likhachev said.

© Sputnik / Vitaliy Timkiv
German Firms Respond to Sanctions by Localizing Production in Russia
However, in her interview with RIA Novosti, Radchenko said that Russian food exporters are facing some tough decisions about how to build on their recent success and further increase exports.

In July the President approved a law banning the production of genetically modified crops or animals in Russia, but Radchenko's Analytical Center thinks the law, which goes into force in July 2017, might have to be looked at again.

"In the context of increasing food exports to countries where the food production is carried out under different conditions than in Russia, we suggest raising the question of allowing genetically modified crops in agriculture. This could partially reduce costs and increase the competitiveness of Russian food products abroad," Radchenko said.

Poland Interested in Good Ties With Russia Despite Supporting Sanctions