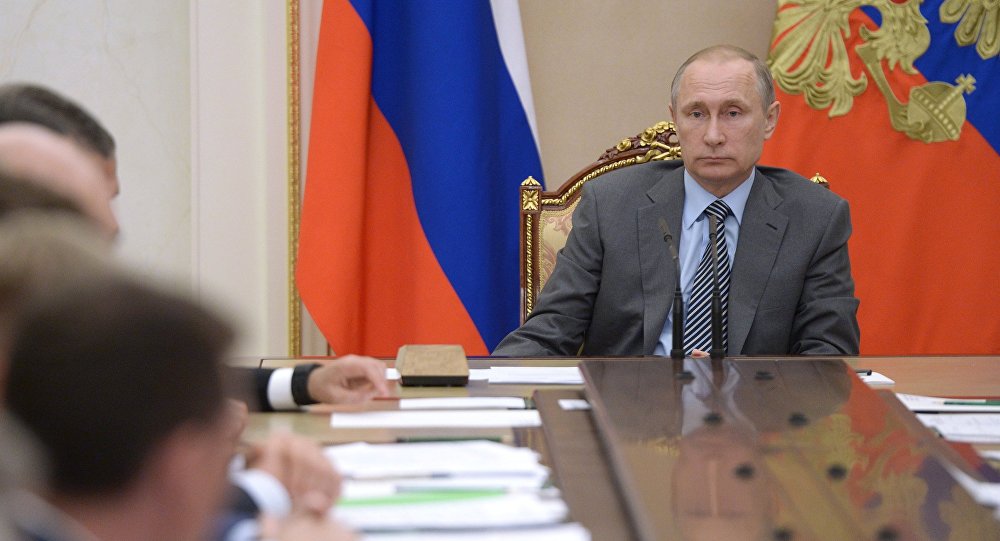 On Thursday, the Russian president implemented a large-scale shuffle of regional governors, presidential envoys, and other officials. To top it off, he signed a decree to merge the Southern and Crimean federal districts into one enlarged Southern Federal District.

In one fell swoop, the shuffle saw four regional governors, four presidential representatives to federal districts, the head of the Customs Service, and Russia's ambassador to Ukraine removed from office or moved to other posts.

© Sputnik / Andrey Iglov
Crimea's Merger With Southern Russia Will Complicate West's Sanctions Game
Probably the most important change was the shuffle involving Russia's federal districts. The districts are groupings of federal subjects of Russia, including regions, republics, territories, autonomous areas and federal cities. They were created in the early 2000s by President Putin to get the country's federal institutions into shape after almost a decade of chaotic reforms. Their presidential representatives are formally charged with enhancing the efficiency of national governance, and as guarantors and coordinators of federal policy in the regions.

2) In the Siberian Federal District, presidential representative Nikolai Rogozhkin was dismissed and replaced by Sergei Menyailo, the former governor of Sevastopol, a federal city governed independently of the rest of Crimea. His post was taken up for the time being by Dmitri Ovsyannikov.

3) Sergei Melikov, the presidential envoy to the North Caucasus Federal District, was moved to the security arena, appointed deputy chief of the National Guard, and replaced by former Crimean district presidential representative Oleg Belaventsev, whose post was liquidated.

Along with Kaliningrad and Sevastopol, two other regions saw the appointment of new governors, with the old ones dismissed entirely, rather than shuffled. Nikita Belykh, the disgraced former governor of the Kirov Region, was replaced by Igor Vasilyev, the former head of Russia's federal real estate and cartography service Rosreestr. Meanwhile, Yaroslavl Region head Sergei Yastrebov resigned and was replaced by Dmitri Mironov, former deputy head of the Interior Ministry.

© Sputnik / Alexander Vilf
Putin Replaces Detained Kirov Governor With Head of Registration Service
Finally on the domestic front, Andrei Belyaninov, the head of the Federal Customs Service, was also forced to resign from his post following a court-ordered search of his home and offices by the Federal Security Service over allegations of smuggling of high-priced alcohol. Belyaninov, who hasn't yet been charged in the smuggling investigation, was replaced by Vladimir Bulavin, another former Federal Security Service officer. Evidence of Belyaninov's lavish lifestyle made the front pages of the Russian press, leading to a public outcry and calls for his resignation.

In the foreign policy arena, Mikhail Zurabov, ambassador to Ukraine since 2009, was dismissed, his duties temporarily entrusted to charge d'affaires Sergei Toropov until a new ambassadorial candidate can be found and approved by both the Russian and Ukrainian parliaments.

But What Does It All Add Up To?

Having gone through the minutia of exactly who was replaced and where, it's time to consider the implications of the shuffle. For their part, Russian political analysts took several things away from the shuffle.

RBK, a Russian business news network, suggested that the shuffle's overall goal "is to eliminate political conflicts in certain areas [such as former governor Menyailo in Sevastopol] and to bringing new blood into mid-level governance roles, whom the head of state considers promising in future election cycles." What's important to keep in mind here is that after a period of time from the mid-2000s until 2012 when governors were appointed by the president directly, the head of state signed a law returning direct elections for regional officials.

At the same time, political scientists and media commentators, both in Russia and abroad, have also made note of the fact that many of the new gubernatorial appointees (specifically in the Kaliningrad, Yaroslavl and Kirov regions) are representatives of Russia's security services.

© Sputnik / Natalia Seliverstova
Will Russia's Economic Growth Be Restored Soon?
Bloomberg's story on the reorganization chillingly dubbed it  an effort to tighten the Kremlin's "security grip on regions." Meanwhile, The Moscow Times, a liberal-leaning English language newspaper, decided to be even more clever, calling the personnel shuffle "Putin's Game of Thrones: The Men in Epaulets Take Over."

But is that the case? Is the shuffle really an indication that Russia is slouching toward some sort of dictatorship of the security services?

The answer is, not really. According to respected Russian political scientist Alexei Zudin, a member of the expert council at the Moscow-based Institute of Socio-Economic and Political Scientist, there are very good political reasons for placing former security and military officials in high office.

Speaking to the Tsargrad news network on Thursday, Zudin explained that there are two important considerations to remember. "Firstly, politicians with a security or military service background have been the most active forces in the carrying out the government's anti-corruption efforts over the last several years."

"Secondly," Zudin noted, "let's not forget that in the last few years, we have shifted to the electoral model of picking governors, either in direct elections or through elections by regional parliaments. This means that officials with a security or military past cannot by any means be the only component for selection as governors. Of key importance is their political and public competency…Of course, military and security officials remain an important political reserve for the recruitment of regional authorities, but having been recruited, they must also correspond with the demands of political competency – to participate in competitive elections for their post."

In other words, what it all means is that political figures with security and military backgrounds have demonstrated their competency, and are popular among the Russian electorate, who broadly supports candidates promising to crack down on corruption.

© Sputnik / Igor Russak
Why the Ruble Becomes More Independent From Global Oil Prices
Another theme speculated on by much of the Russian media is that the president, having long been forced to focus on the country's foreign policy, has finally turned his gaze to domestic politics, traditionally the domain of the prime minister and other officials.

Zudin suggested that this too was an overstatement. "I'll be frank, I don't like this sort of suggestion, that 'the president has become engrossed in internal politics', or 'has become engrossed in foreign policy'. I'll tell you why: The president is the head of the Russian government. He carries out his duties and makes decisions on a certain range of issues. And in the course of this activity, the focus falls on either domestic or foreign affairs. Here, what's important is not the focus, which as we know constantly changes. What's more important are the tasks that are set."

The analyst explained that " in order to effectively participate in international politics as a truly independent entity, Russia needs an efficient government, with an effective system of state authority, and high quality political institutions. And this is one of the reasons motivating Vladimir Putin, who is engaged in foreign policy, to actively participate in domestic politics as well."

A Special Note on the Ukrainian Ambassadorship

According to Russian analysts, the decision to replace Mikhail Zurabov, Russia's ambassador to Ukraine, carries with it a special significance separate from the shuffle of other officials.

Speaking to the RIA Novosti news agency, Andrei Suzdaltsev, the deputy head of the Faculty of World Economy & International Relations at Moscow's Higher School of Economics, emphasized that Zurabov's dismissal was a decision that will have wide-ranging consequences for Russia's foreign policy in relation to Ukraine and its Western partners.

© Sputnik / Vladimir Fedorenko
Russian Lawmakers Ready to Consider Candidate for Post of Ambassador in Ukraine
"There are a wide variety of opinions on the very difficult, almost 'frontline' conditions faced by Zurabov in his post, with negative assessments predominating," Suzdaltsev noted.

The negative view of the ambassador's tenure has to do with what experts say was a very passive position at the outset of the political crisis in Kiev in 2014. At that time, while the American, Canadian and European embassies were actively engaged in the support and promotion of the Maidan protestors and their political backers, the Russian embassy remained extremely passive.

On the plus side, Suzdaltsev suggested that "the mere fact that Russia and Ukraine did not enter an open confrontation between 2014 and 2015," at the very height of the crisis, "is doubtlessly an important contribution" made by Zurabov and his staff.

According to the expert, the Russian embassy in Kiev today carries with it a crucial role, comparable to Russia's diplomatic missions in the world's major powers. This has everything to do with Russia's strong connection with Ukraine as a brotherly nation which "will never be considered foreign to Russia."

Commentators have repeatedly pointed to the fact that the former ambassador had a very close personal relationship with Ukrainian President Petro Poroshenko and other members of the political elite.

Zurabov's retirement, Suzdaltsev suggested, is an indication "that Moscow has laid down new priorities in its relations with Ukraine, and with the Western countries supervising Kiev. [The dismissal of the ambassador] is an element of that new line, which we don't fully know the contours of." In any case, according to the analyst, "the Russian leadership looks to be set on selecting people of a new formation for its diplomatic posts."

New Russian Ambassador to Ukraine to Be Appointed Soon