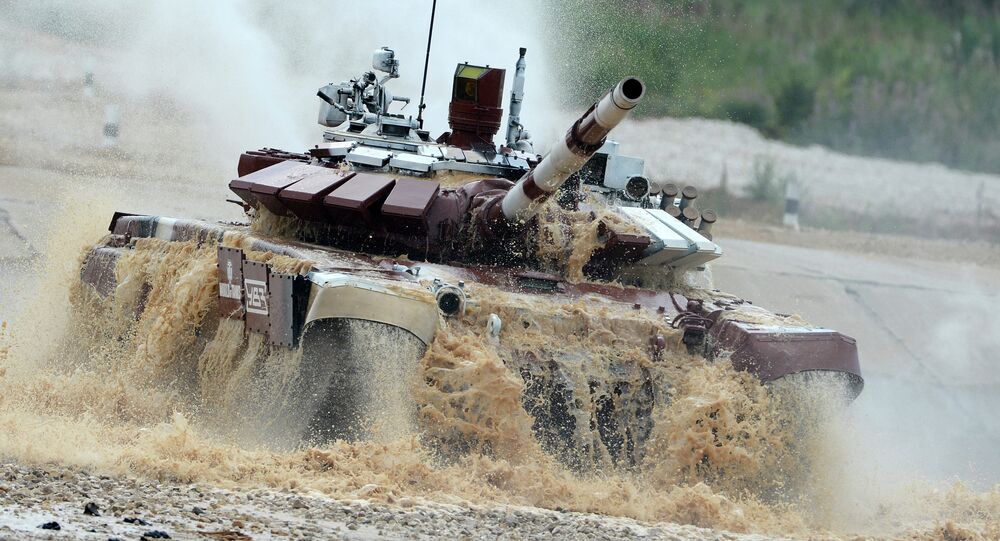 According to the results of the draw, Russia participates in the biathlon on a green tank, Serbia on yellow, blue tank was appointed to India and red to Kazakhstan. Large number of visitors, representatives of 19 countries participating in IAG-2016 along with Russian, Kazakhstan and Belarus defense ministers are among the spectators.

The second race will be attended by Mongolia, Kuwait and Armenia on the yellow, blue and green tanks, respectively.

All teams will perform on T-72B3 tanks provided by Russia aside from Chinese team which will use tanks of its own production and the Belarus team using T-72, which was modernized at the national enterprises.

© Photo : Youtube/Other Entaitainment
Armored Drift: T-72 Flips Over at Tank Biathlon Championship
Russian Ministry of Defense promised that this year the competition will become more dynamic, the number of targets will be increased from five to eight.

A total of 12 teams will participate in the semi-final races, unlike the past year when there were only eight of them. Tank biathlon final will be held August 13 at the closing day of the games.

The IAG, which started earlier in the day, features the competitions in 23 disciplines. A total of 121 teams from 19 countries across the world partake in the Games monitored by observers from 11 countries.

Child Dies Amid Explosion During Tank Biathlon in Donetsk Republic