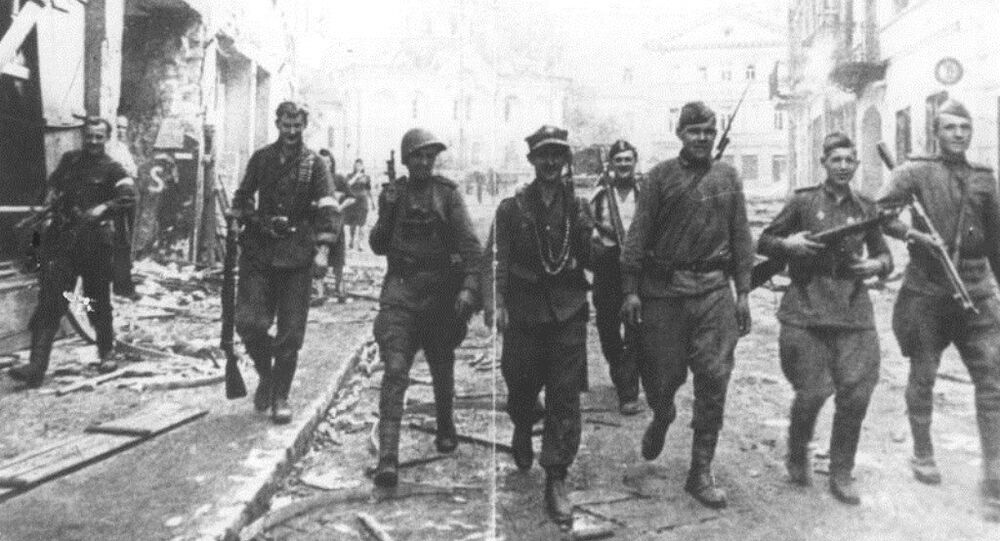 Lawmakers from the Russian Duma, the lower house of the country's parliament, are planning to introduce a bill recognizing the crimes committed by Ukrainian fascists against the Polish civilian population as 'genocide', Russia's RIA Novosti reports.

© Sputnik / Alexey Vitvitsky
Polish Lawmakers Recognize July 11 Remembrance Day of Genocide by Ukrainian Nationalists
The proposal, put forth by the Russian Communist Party, follows on the success of a similar initiative in Poland's parliament earlier this month. Last Friday, the Sejm, Poland's lower house of parliament, passed a resolution saying that the Ukrainian nationalist insurgents' brutal wartime campaign of ethnic cleansing against Poles between 1943 and 1945 constituted genocide. The Sejm's resolution also marked July 11 as a day of commemoration, dedicated to the Poles who fell victim to the crime.

The campaign of ethnic cleansing, orchestrated by the Organization of Ukrainian Nationalists – Ukrainian Insurgent Army (OUN-UPA), targeted Polish, Jewish, Russian, and anti-fascist Ukrainians in the regions of Volhyn and Eastern Galicia. The campaign against the Poles alone resulted in the deaths of between 80,000 and 120,000 people, predominantly women and children, between 1943 and 1944. The campaign was also shockingly brutal, with militias burning down villages and using knives and axes on their victims to save bullets.

The Russian MPs' bill pays direct homage to the initiative of their Polish counterparts. The text of the document, cited by RIA Novosti, reads that "the Russian State Duma expresses its sincere condolences to the Polish people in connection with their national tragedy, and its profound solidarity with the Polish Sejm on the recognition of the crimes of Ukrainian nationalists in Volyn as genocide. This declaration by the Russian Duma is intended to defend the truth about the Great Patriotic War (the Second World War), its heroes and victims."

The lawmakers emphasized that their proposal is meant to protect objective accounts of the historical events of the time from politically motivated reevaluations and distortions, and to prevent the rehabilitation of Nazism and associated ideologies. They also hope that their bill will help improve Russian-Polish relations, which have been particularly rocky lately.

© Sputnik / Grigoriy Vasilenko
Naming Roads, Burning Bridges: Kiev Loses Friends Glorifying Anti-Polish War Criminals
Russia has repeatedly criticized Kiev for what it sees as the rehabilitation and lionization of Nazi-allied war criminals. Following Viktor Yushchenko's 2004-2005 Orange Revolution, Ukrainian authorities began an active campaign glorifying UPA leader Stepan bandera, and writing a new historical narrative suggesting that wartime fascist militias were actually heroes, fighting for Ukraine's independence from both the Soviets and the Nazis. When Yushchenko's government was voted out, Bandera was brushed aside, but in 2014, after the success of the Maidan coup d'etat, Kiev made him a national hero again. The government campaign has even led to divisions within Ukraine, since only 100,000 Ukrainians fought for OUN-UPA militias, compared with 6 million who fought in the ranks of the Red Army.

Russia's relations with Poland have been marred by long-standing historical animosities, including disagreements over the Second World War. Russia has expressed its outrage over a Polish campaign to remove dozens of Soviet memorials left over from the communist period devoted to the 600,000 Soviet soldiers who died on Polish soil helping to liberate the country from Nazi occupation. The Poles, for their part, have criticized Russia's role in the lead up to the war, including Moscow's signing of the Molotov-Ribbentrop Pact, and the execution of Polish officers by Soviet security services. Moscow has apologized for the executed officers.

© AFP 2021 / YURKO DYACHYSHYN
V is for Vacuous: How Kiev is Fighting the Memory of Victory Day
Earlier this month, Polish Defense Minister Antoni Macierewicz went out of his way to condemn Moscow, claiming that the Soviet Union was to blame for the Volyn genocide, and that they had "used" Ukrainian fascists for the organization of the anti-Polish genocide. Russian commentators dismissed the allegation, pointing out that the Red Army was the main force responsible for smashing OUN-UPA forces; indeed, the Soviet Union continued to fight leftover UPA militia until the mid-1950s.
...
Reddit
Google+
Blogger
Pinterest
StumbleUpon
Telegram
WhatsApp
164