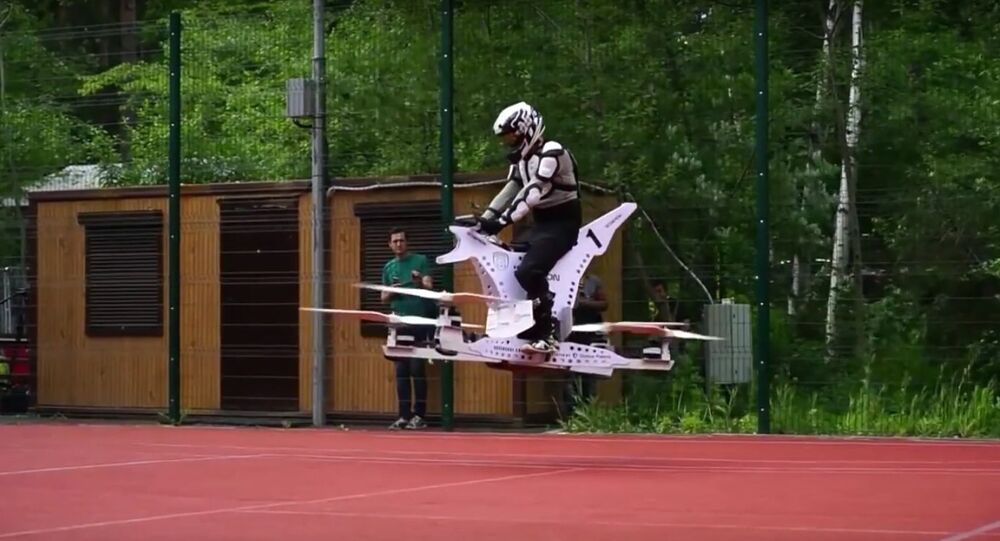 Riders on the Sky: Russia Rolls Out a Flying Bike

The Russian company Hoversurf has created a flying motorcycle capable of accelerating up to 100 kilometers per hour, according to the newspaper Izvestia.

© CC BY 2.0 / jareed / Batmobile
To the Batmobile! You Can Own the Caped Crusader's Car for One Mln Euros
The flying bike Scorpion 1, capable of moving at a speed of 100 kilometers per hour, has been developed by the Russian company Hoversurf, the Russian newspaper Izvestia reported.

In an interview with the Izvestia, Hoversurf founder Alexander Atamanov described the Scorpion 1 as a heavy multi-rotor manned copter.

At the same time, he said that in the future, more attention will be paid to the use of heavy unmanned aerial vehicles.

"We proposed the concept of a flying motorcycle for promotion purposes even though we know that in terms of market prospects it is heavy drones that will be in great demand," he said.

Atamanov added that his company is ready to make such a motorcycle if it receives an individual order, but that people are still wary of buying such aircraft.

According to him, the Scorpion 1 is equipped with an engine with batteries allowing the flying bike to remain in the sky for about twenty minutes.

© Flickr / Philippe Giboulot
Future Drones to Visually Coordinate Flight Like Birds
He said that the company has already developed a hybrid version which will use hydrocarbon fuel.

The Scorpion 1 is already available for pre-order and costs 52,000 dollars (about 3.3 million rubles), according to the company's website.

In this regard, Izvestia quoted Alexander Grek, chief editor of the Russian edition of the magazine Popular Mechanics, as saying that individuals are still legally barred from buying and using such vehicles as a means of transportation in Russia.