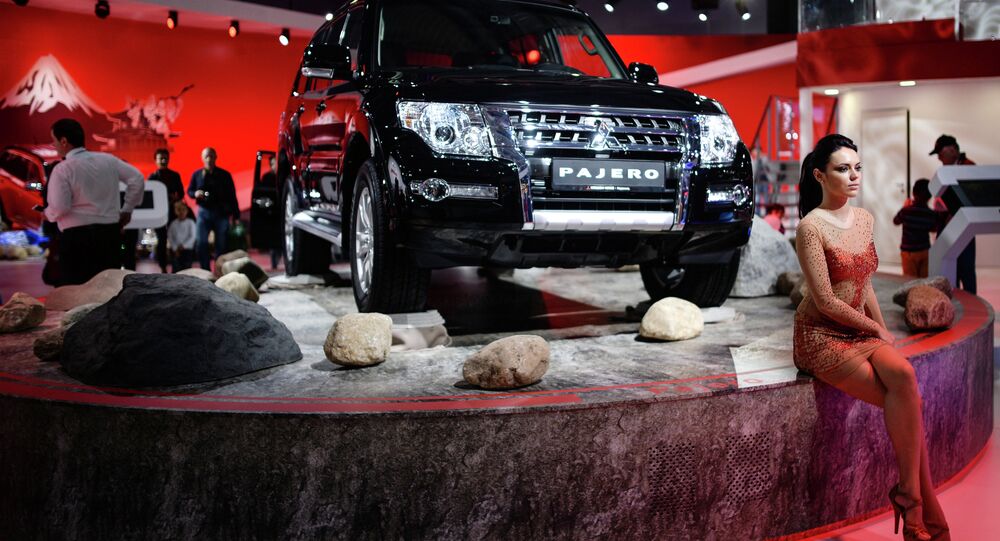 ‘Made in Russia’ Mitsubishis Are ‘Better Than Japanese’

This year Mitsubishi Motors Russia marked its 25th anniversary by rolling out a limited black-and white edition of its hugely popular Outlander crossover. The 25th anniversary model will be sold also in Belarus and Kazakhstan.

© RIA Novosti . Vladimir Rodionov
AvtoVaz Set for 20% Increase in Production of Cars for Renault, Nissan
With the current economic slowdown resulting in a noticeable drop in car sales across Russia, Mitsubishi has seen  a record 84 percent first quarter spike in the sales of its Outlander SUVs, which inspires hope for the future, Ilya Nikonorov, the head of marketing at the Mitsubishi Motors Russia (MMR) told Sputnik.

“The car market, just like others, is an up and down business where a slowdown is always followed by an uptick. We are optimistic about the future, all the so now that our top-selling brand, the Outlander, has been demonstrating a steady growth, mostly because we assemble them right here in Russia,” Ilya said.

Mitsubishi Motors has been assembling the Outlanders in Russia since the plant it built with Peugeot Citroën near Kaluga went on-stream in 2010.

“This is a strategically important enterprise for us ensuring stable deliveries and letting us keep the prices down,” he added.

There were many initial doubts about having foreign cars assembled in Russia.

“’Our people assembling Japanese cars? You gonna be kidding!’ many said. And still, with modern technology and quality standards there should be no place for doubt. The cars are undergoing all imaginable tests under the watchful eye of 20 Japanese engineers working at the Kaluga plant,” Ilya noted.

He added that the equipment you can find at some enterprises in Japan is pretty old, while in Russia only the very latest machines are used at every stage of assembly.

“Our Japanese colleagues admit that [the Japanese cars assembled in Russia] not only are up to par with their Japanese-made analogues, but sometimes are even better,” Ilya boasted.

During its 25-year in the Russian market a Mitsubishi Motors has opened some 120 dealerships in 78 cities all across the nation. It has also pioneered the production of electric cars in Russia. With the number of recharging stations mushrooming, the company has sold around 300 such cars since 2012. Which is not bad, especially given the Russian motorists’ conservative mentality and the lack of state support for non-gasoline vehicles.

Commenting on Renault-Nissan’s stated desire to buy 34 percent of Mitsubishi stock, MMR CEO Takai Nagoya said that the Franco-Japanese alliance was looking for a bigger share of the Asian market and that the purchase of Mitsubishi shares was giving them much-needed access to a strategically important region.

The purchase of Mitsubishi stock would add 1.1 million cars to the 8.5 million units Renault-Nissan sells each year. “The merger will keep our plants busy and facilitate exchange of cars and parts. As for distribution and dealerships, little will change here, so our Russian clients have nothing to worry about,” Mr. Nagoya said.