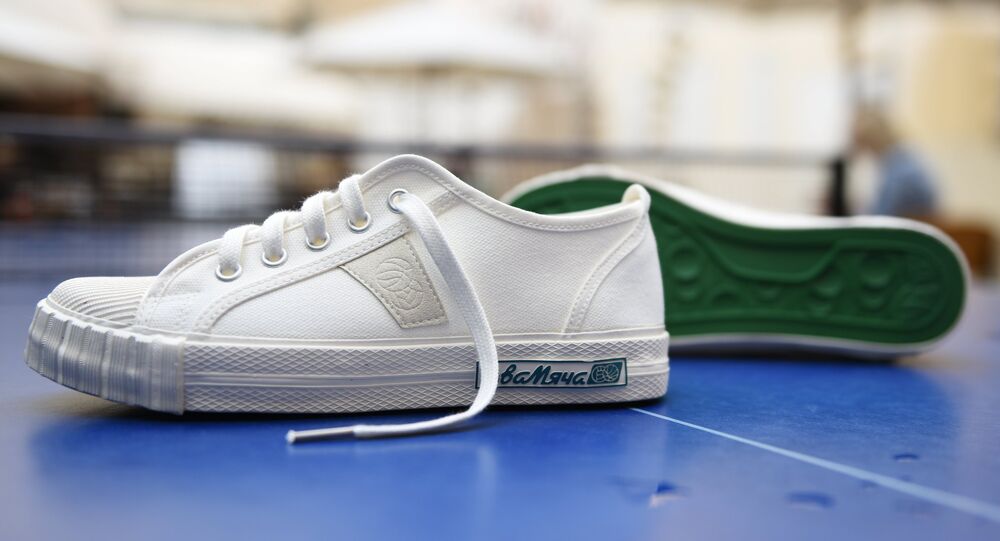 Russian designers have revived production of the legendary "Two Balls" shoes which were very popular in the Soviet Union.

© Sputnik / Ilia Pitalev
Classic Soviet Cartoon Character Cheburashka Becomes Cosmonaut
The sneakers have been remade up to the last detail, including the green soles and sewed logos.

According to a press release, the aim of enthusiasts was to revive the legendary brand and produce a high-quality product like in the 1960s and 70s. The designers retained the original design and manufactured the shoes in accordance with the Soviet standards.

"In addition to its quality, 'Two Balls' reflect the cultural heritage of our country. They were invented more than forty years ago, in the golden years of the light industry, and made with such high quality that we could improve them only in details," the Russian brand's owner Evgeny Raykov said.

Various models of sneakers were popular in the USSR, however the best among them and the most desired ones were the models of the Soviet-Chinese production, in particular those of "Two Balls".

© Sputnik / Maksim Blinov
Moscow to Oppose Demolition of Soviet Monuments in Europe
The history of the brand goes back to 1965 when it emerged as a result of one of the first Soviet-Chinese collaborations in the production of shoes and became a huge success in the USSR. The shoes were popular not only among young people wearing them on the dance floor and in sport centers, but also among many prominent athletes, musicians and artists.

In 2013, young entrepreneurs came up with the idea to revive the legendary brand.

The designers found an old plant where "Two Balls" sneakers were produced more than forty years ago and which maintained original equipment. Moreover, they used new technologies to make the shoes even more comfortable.

"Today, people have become bored of the low quality and faceless mass market products. Motley consumer goods which were attractive in the nineties don't look good to the eye anymore; the Russian consumer society has grown and become more demanding. Thus, today there is a very high demand for high-quality products, especially for high-quality products developed by our experts according to Russian standards and reflecting our culture and heritage," the website of the revived brand says.

In Soviet Russia, Car Drives You!