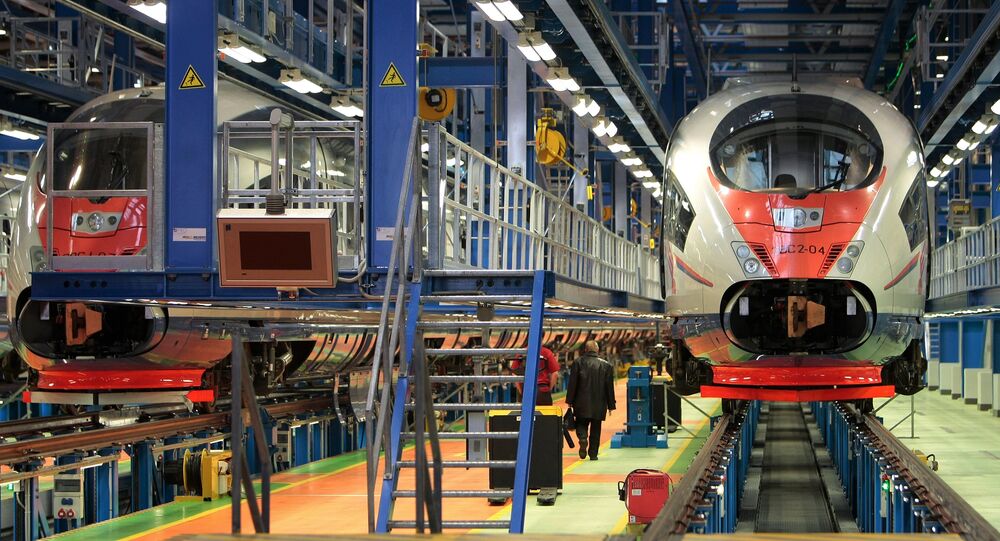 Russian Railways (RZD) told the newspaper that the new engines will be installed in next-generation high-speed trains, and will use at least three percent less energy.

"This efficiency will be reflected in the cost of tickets for our passengers," Valentin Gapanovich said.

The new engine was tested in a "Sapsan" high-speed bullet train; Joerg Liebscher, the head of departament at Siemens Russia, told Izvestiya.

Siemens Velaro trains, which have a top speed of 250 km/h, have been running between Moscow to St. Petersburg since 2009. In Russia they are known as "Sapsan" (peregrine falcon) trains.

"We have finished testing of the new engine. Now we are going to take the engines out of the Sapsan and take them to the laboratory, completely disassemble them and analyze their state after one year of operation. This will take two to three months," he said.

Liebsher said that the engine will not replace those currently used in the Sapsan trains, but are intended for a new high-speed train line planned for construction between Moscow and Kazan, capital of the Republic of Tatarstan.

© AP Photo / Alexander F. Yuan
Bullet Speed: China Develops Next Generation High-Speed Train for Russia
The new 770 km train line will enable new high-speed trains to travel at speeds of up to 400 km/h, and is set to become part of an international high-speed train line that eventually continues to Beijing.

"Regarding the Moscow-Kazan high-speed rail project, of course it won't be today's Sapsan, it will be a new generation Sapsan," Liebscher said.

"We are not considering replacing the Sapsan engines. We see this as a good project for trains that are capable of accelerating to speeds of over 300 km/h. It will be a new model of train, for which the permanent magnet motor is really useful."

Maglev trains are currently used in Japan, South Korea and China. Shanghai is home to the world's fastest commercial maglev train, which was built by a joint venture between Siemens and ThyssenKrupp. It connects the Shanghai Metro with Shanghai Pudong International Airport at a top speed of 430km/h.