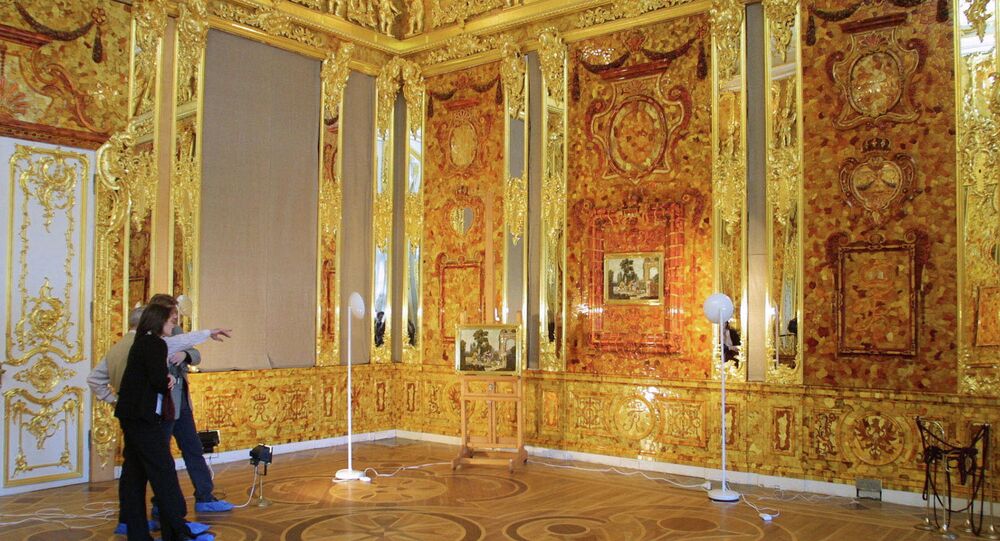 The search for the world-famous Amber Room looted by Germans during WW II continues as a Polish museum curator believes that the 18th century masterpiece may in fact reside in a previously undiscovered underground chamber located in a bunker complex in northern Poland that served as a German army HQ during the war.

© Sputnik / Sergey Velichkin
Russia's Mythical Amber Room Possibly Found in WWII Bunker in Poland
In 1941 the German invaders took the Amber Room from the Catherine Palace outside Leningrad (now St. Petersburg) and moved it to a royal palace in Konigsberg (now Kaliningrad.) There has been no word about its whereabouts ever since.

In 2008 treasure hunters in a small town in East Germany started breaking into a bunker they believed could hold one of the lost wonders of the modern world.

They acted on a tipoff by an amateur historian who said he had learned about the hidden treasure while sifting through the papers of his late father who served as a Wehrmacht radioman during the war.

However, the excavation work was quickly scrapped after the organizers had an angry row and stopped financing the whole project.

In 2011 a team of researchers discovered a tunnel deep under a local fortress, which allegedly contained a number of wooden crates filled with jewels or what had remained of the Amber Room. Nothing was found.

Last year treasure hunters were looking for the Amber Room inside an old tunnel in Wuppertal. The search had been initiated by a local pensioner who, together with several of his peers entered the tunnel only to come against a brick wall.

They were certain that the Amber Room was right behind it, but all they found were several bats and dust.

The search for the Amber Room led the treasure hunters to Denmark where a retired soldier, who once served in the Wehrmacht, assured them that what they were looking for had been buried near a partly abandoned village.

The veteran said that in addition to the Amber Room, they would also find there precious metals from Russian churches and a lot of "Jewish gold."

Russian researchers still believe that the Amber Room should be looked for in Kaliningrad. According to them some 30 crates filled with amber panels were  taken out of the Konigsberg Castle in 1945 and hidden inside a secret bunker.

In March 2015, the experts assured reporters that they knew the exact location of the mystery bunker, but nothing has been found ever since.

The Amber Room chamber decorated with amber panels backed with gold leaf and mirrors was originally built for the Catherine Palace of Tsarskoye Selo near Saint Petersburg.

The chamber was constructed in the 18th century and was lost during World War II after being looted by Nazi German forces. The Amber Room that is currently on display is in fact a reconstruction completed in 2003.