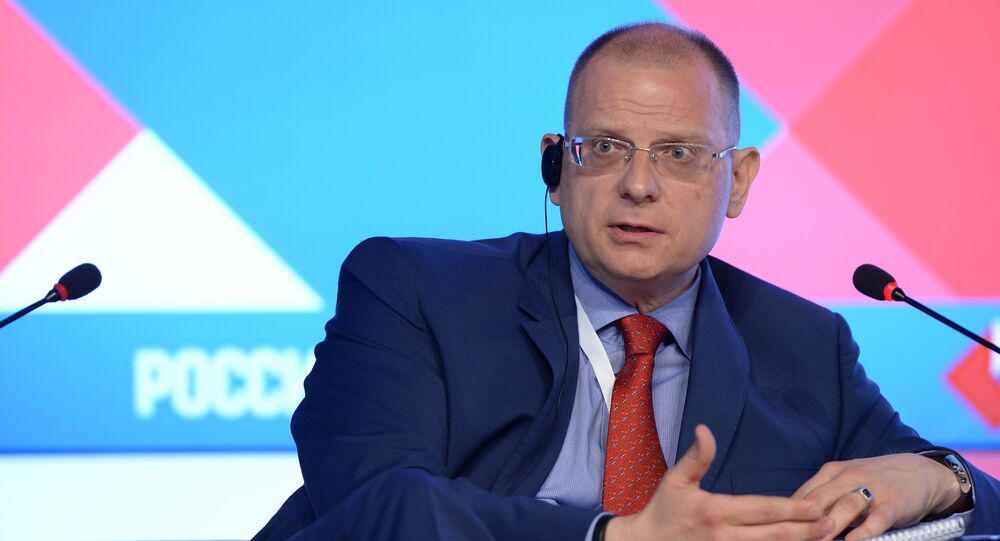 According to Dolgov, "politicians in the West and in the Baltic countries, in Poland, in the United States, bureaucrats in Brussels are afraid, because they understand that this — access to Russian media — will wipe out the blockade that they themselves have established, which is completely artificial."

"I said it yesterday, and other members of the discussion said it as well, that trying to cut people off from certain news outlets today is an absolutely fruitless activity, especially due to social media, where information is spread very quickly…Of course, you can block a TV broadcast, but you're unlikely to be able to cut off millions of, say, Russian-speaking Ukrainian citizens from Russian media. And overall, banning culture, banning mass media is the last thing one should do. It's an absolutely fruitless stance, a fearful one, and, of course, illegal, violating basic rights, the fundamental right to access information," he added.

Russian media outlets cover more diverse points of view on the same issues than US media, according to Dolgov.

The ombudsman noted that in order to assess the level of media freedom in Russia, one should simply approach a kiosk selling press and buy five-six most prominent papers.

"Read what they write on the same day and you'll get a huge range of perspectives — this is what pluralism is. All these newspaper publications are widely available, and they have online versions as well. In what other Western country — a developed democracy, as they call themselves — in what other country is it possible?" Dolgov noted.

He made a comparison with papers sold in the United States, where he had worked.

© Sputnik / Valery Melnikov
Media Censorship Becomes Global Phenomenon - Press Agency Head
"The newspapers there do write with different emphases — some are more supportive of Republicans, some support Democrats, but they write politically correct things in relation to the authorities," Dolgov said.

According to the ombudsman, this political correctness is not necessarily maintained in Russian media.

"Criticism [of government], which exists in the Russian media, this pluralism, it is perfectly legal, completely developed… Therefore, with regard to the freedom of the media, I believe there can be no claims against Russia," Dolgov added.

"I can say one thing — in the United States, there are huge systemic problems with human rights in general and with media freedom, freedom of speech, freedom of expression in particular… Journalists are suspended from profession, their work is hindered very often, there is direct political pressure [applied to them]," Dolgov said.

© Flickr / Jorge Franganillo
Moscow Urges UN, OSCE to React Over Turkey Press Freedom Violations
The information on such violations in the United States are used in the Russian Foreign Ministry’s human rights reports.

"I think that the United States has work to do," the ombudsman noted.

Turkey, too, has to change its policy towards media and show respect for freedom of expression, according to Dolgov.

Russia will continue trying to get an adequate and timely response to Turkey’s press freedom violations including the Council of Europe, the United Nations and the Organization for Security and Cooperation in Europe (OSCE), the ombudsman said in the interview.

© AFP 2020 / JOEL SAGET
'Banning Mass Media is the Last Thing One Should Do' - Russian Ombudsman
The more the Western public is being "brainwashed" by local media, the more it strives for an alternative news coverage, Russian Foreign Ministry's Human Rights Ombudsman Konstantin Dolgov told Sputnik on Tuesday.

Some Russian media are under sanctions as they "work effectively and provide an alternative point of view as a counter to para-governmental Western or pro-Western point of view. And a huge number of people [in the West] are interested in it, because the more Western public opinion, a considerable part of the Western society is being brainwashed, the more it strives for the alternative news coverage," Dolgov said.

Modern-day journalism has to be, first of all, "socially responsible," according to the ombudsman.

"Regardless of reporters' political affiliations and political preferences, in any case they must feel social responsibility in their work. The second aspect is double standards, they are totally unacceptable as there is no monopoly on information," he said.

Western media and politicians have tried to retain monopoly over information and reporting, he added, stressing that such a stance is considered to be less acceptable to the global public.

According to Dolgov, media outlets such as the RT broadcaster and Sputnik news agency work effectively, offering the readers an alternative to the pro-Western point of view on global issues, "which is of interest to a huge number of people" in the West.

The ombudsman also touched upon the issue of dangers posed by irresponsible spread of "harmful" information on the internet.

"Any evaluation expressed, any judgment, especially on social networks… can be a trigger for action, including often unlawful, and radical, and we can see how minds are being recruited," Dolgov said.

According to him, it is often extremists and terrorists who recruit young people by the means of internet.

"The spread of harmful information on the Internet is a huge problem, and of course this means further increasing responsibility for journalists, an increased demand for professionalism," he said.