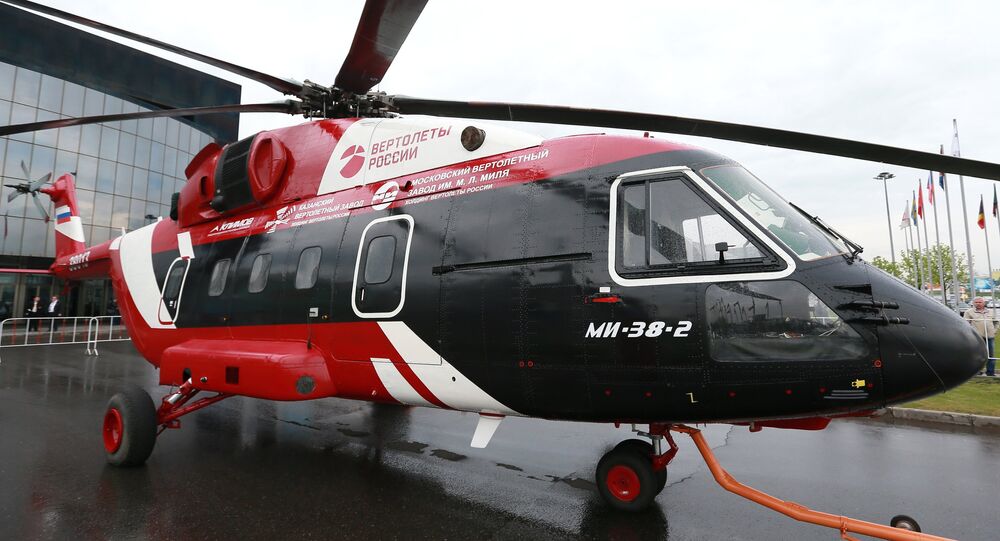 Russia's record-setting Mil Mi-38 medium multirole helicopter which reached an altitude 8,600 meters has appeared on the defense procurement program. In an interview with Zvezda TV the program’s director Alexander Akhromeyev revealed the new helicopter’s combat modifications and the potential it holds in domestic and global markets.

© Sputnik / Alexey Filippov
Russian Defense Ministry to Become First Customer of New Mi-38 Helicopter
When asked whether the Mi-38 was a completely new design or just an upgraded version of an existing rotorcraft, Akhromeyev said that it was an essentially new helicopter with many of its elements developed from scratch, including the engine, fuselage and a new rotor made from composite materials.

Speaking about the niche the new helicopter could fill and its potential buyers, the director said that Mi-38 will be used in a wide variety of spheres; from transporting passengers and cargo flights (over 5 tons) to search and rescue missions.

He also noted that the Mi-38 was designed as a transport helicopter, not a combat one.

“It could be used to haul in cargoes and reinforcements during combat situations, engage in search-and-rescue operations and serve as a flying hospital. If need be, it could carry arms too,” Akhromeyev explained.

Russia’s top officials now use the Mi-8 helicopter equipped, among other things with a missile-defense system and advanced electronics. When asked whether such a rotorcraft could be built around the current Mi-38 design, Alexander said: “The Mi-38 is as good as the Mi-8, so adding similar gear and even armor will be no problem.”

The new helicopter can also be used in the mountains.

Once the new helicopter has received an international certificate, Russia could start selling it abroad, above all in the countries which have traditionally relied on Russian-made aircraft.

When asked whether the Mi-38 was being built entirely from Russian-made elements, including the engine, Akhromeyev said that the TV-7-117V engines were 100-percent Russian, just like the system of pumps and onboard electronics.

“Even though some of the electronic elements used on the Mi-38 are foreign-made, we are working hard to replace them with our own, especially the ones we can no longer buy abroad due to the sanctions,” Alexander Akhromeyev said.

Serial production of the Mi-38 helicopter has already begun in Kazan and the new helicopter is currently undergoing a second stage of certification so that it meets the most stringent demands of potential buyers in Russia and elsewhere in the world.