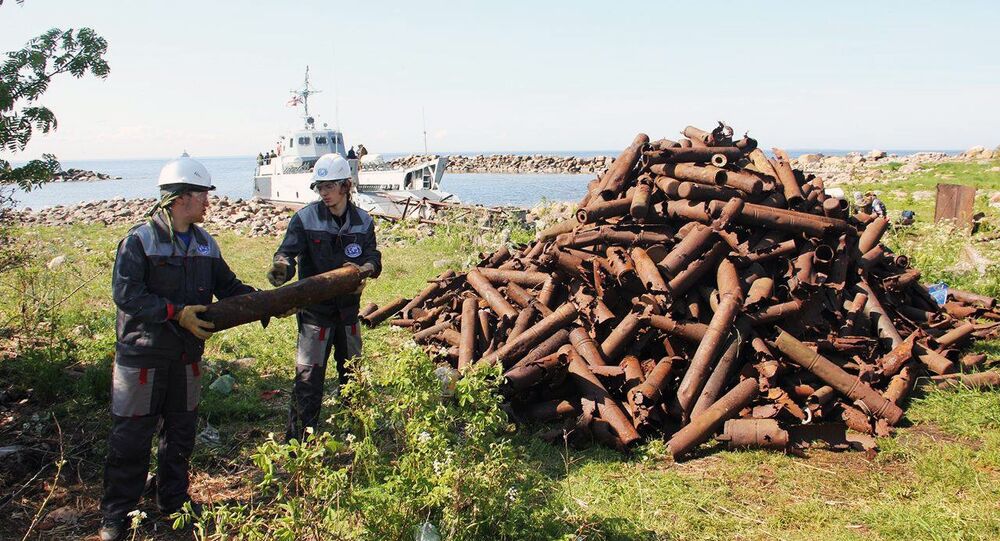 Russian Geographical Society (RGS) member Alexey Pochernikov said that the expedition in Russia’s Bolshoi Tyuters island in the Gulf of Finland discovered parts of the plane coincide with the technical description for the Soviet Pe-2 bomber.

The expedition is the fourth to be carried out by the RGS to several Gulf of Finland islands, and is sponsored by the Russian Defense Ministry and the Leningrad Region administration. Some 100 Russian servicemen and 20 units of military equipment are taking part in the expedition alongside volunteers and Rossiya Segodnya International Information Agency journalists.

On Wednesday, the RGS expedition on Bolshoi Tyuters located the site of the wreckage. An expedition member cautioned that finding the remains of all of the plane's crew members is unlikely.

"The [discovered] parts of the plane coincide with the technical description for the Pe-2 bomber," Pochernikov said.

© Sputnik / Radik Amirov
Expedition Exhumes 30 German WWII Soldiers on Bolshoi Tyuters Island
The Pe-2 was a mass-produced Soviet light bomber that played an important role World War II. The plane was used as a heavy fighter, a reconnaissance aircraft and a night fighter. Its first flight was conducted in 1939, and it entered into service in 1941.

Bolshoi Tyuters was occupied for three years by Nazi forces and detachments equipped with autocannons were stationed across the island.