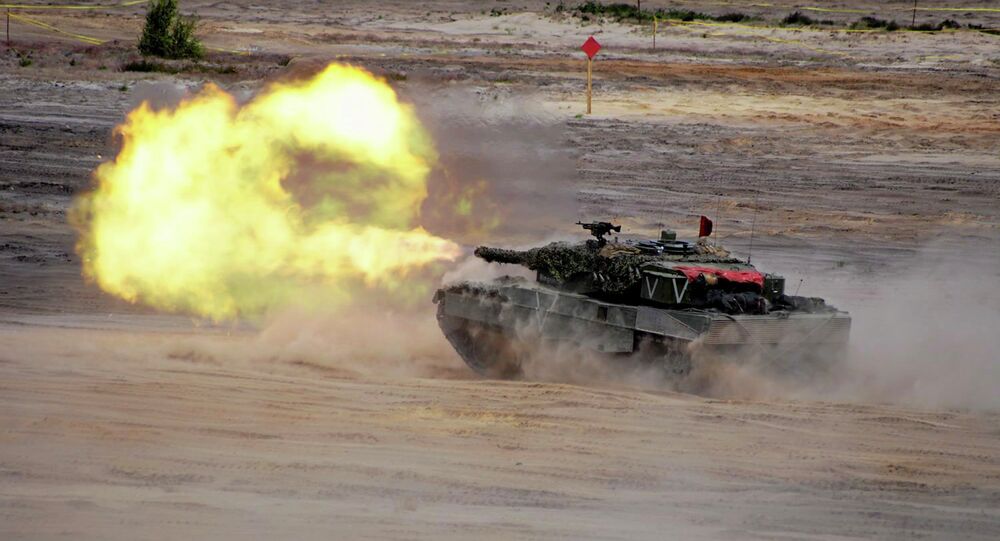 On Wednesday, expanded NATO military exercises kicked off in Poland involving more than 1500 troops as the Polish defense minister announced that he will lobby for a permanent military presence along Poland’s eastern flank during the July NATO summit in Warsaw.

The hostile NATO buildup along the Russian border comes after the military bloc’s missile defense system recently went online in Romania and last Friday’s announcement of ongoing construction of a separate anti-Russian missile shield in Poland.

The Pentagon aims to get Russia to use resources to respond in kind along their Western border, also suggesting that Moscow’s nuclear deterrent will be neutralized by increased NATO missile defense.

Russian President Vladimir Putin stated in November 2015 that Russia would not be baited into wasting money to combat an unnecessary NATO buildup, but warned last Friday that the missile defense system in Poland exacerbates the risk that Moscow will be forced to respond, calling NATO’s  actions "a step toward a new arms race."

Loud and Clear’s Brian Becker sat down with Daniel McAdams of the Ron Paul Institute for Peace and Prosperity to discuss the war exercises and NATO’s increasingly antagonistic posture toward Russia.

​NATO’s military exercises in Poland kicked off today, with more large-scale war games planned in June. What is the rationale behind current NATO moves?

Speaking facetiously, McAdams explained the situation by channeling the psyche of a Cold War hawk, saying that it is important to send a "psychological message" to the "very, very aggressive Russians" by having "military exercises on Russia’s border which is, of course, not at all aggressive but rather exercises to practice peace."

"It is a blatant ramping up of the military provocations on Russia’s border," said McAdam breaking from his pointed joke. "The missile defense went online in Romania, which is also very close to Russian soil, so we have a number of these things, NATO exercises in Poland, that are significant. We also saw a NATO exercise in Georgia where, for the first time, tanks were involved."

What happens if a permanent military presence is established on Poland’s border with Russia?

"It would be expensive and it would be provocative and frankly I can’t quite get [understand] this government in Poland," said McAdams.

"It is a right-wing government, on the one hand, along with Slovakia and Hungary, it has been more assertive of its national sovereignty vis-à-vis Brussels, and standing up for itself with a new kind of bloc developing in central Europe that doesn’t go along with the dictates of Brussels and Washington," observed McAdams. "I suppose for historical reasons there has been an enormous blind spot in regards to Russia, even though it is not in their interest to maintain hostility."

The analyst claimed that he did not see a strategic purpose behind Poland’s actions, which are independent-minded in terms of geopolitical economics, but extremely subservient to the Western hegemonic narrative on the security front. "It’s puzzling," said McAdams.

There has been talk about Germany providing troops on the Russia-Poland border, will that happen and what will the result be?

"It hasn’t been settled whether this contingent, as of now, will deploy in and out of Poland as Warsaw wants," said McAdams. "It is unclear whether German troops will be involved, but the Poles are encouraging this, against a lot of resistance among the German people, although Germany’s leadership supports these actions."

"If that happens, it will of course have an enormous psychological impact, even though there is a lot of water under the bridge, and even though Russia is no longer the Soviet Union and Germany is no longer Nazi Germany," said McAdams, referring to lingering antagonism between the countries in light of Nazi Germany use of Poland as a passageway to attack the Soviet Union in World War II.

"You can’t erase history and there are wounds that don’t close over time, and so the idea that you will have German troops on Russia’s border is insult to injury and, perhaps, that is by design," remarked the analyst.

The US claims that the missile defense system in Romania and Poland are to offset Iranian missiles rather than an aggressive overture vis-à-vis Russia. Do these claims have merit?

"This was the argument that was put forth prior to the Iran deal and the Neocons could distort these actions to fit their way of thinking," said McAdams, "but to use this argument after the deal is so absurd and so ridiculous."

"It obviously has to do with providing the US first-strike capabilities, of denying a Russian response if the US launches a first-strike, and this is all pretty basic missile stuff from the Cold War 1980s," said McAdams. "I guess a lot of these retreads from the 1980s are still throwing their stupid ideas around, but to say this has anything to do with the Middle East is pretty laughable."