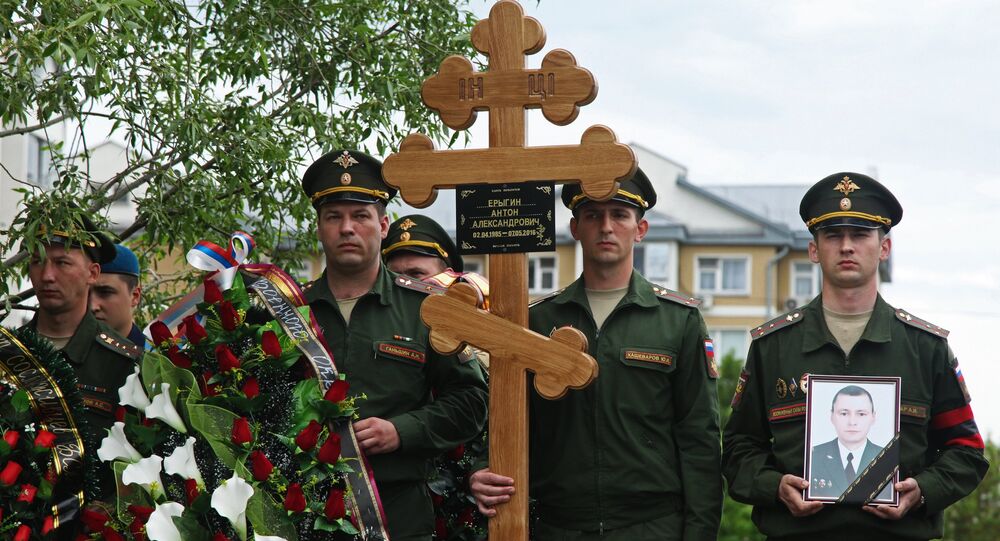 Friends of Russian Soldier Killed in Syria Mourn in Voronezh

Russian serviceman Anton Yerygin, who suffered serious wounds and died in a hospital in Syria, will be being commemorated in his home town of Voronezh, with his friends, coworkers and civilians coming to pay him tribute.

According to Noskov, he and Yerygin took part automobile competitions at the Russian and international level. They worked together at the Voronezh auto club.

“Last time we spoke in February about the event,” the friend of the deceased said. Noskov added that Yerygin planned to take part in the tournament, but in the end he could not come. Back then he had not yet signed the contract for military service.

In order to pay tribute to Yerygin, many of his colleagues and the residents of Voronezh came to the House of Officers at the military camp in the northern district of the city.

Yerygin joined the army right after finishing his education at the Institute of Economics. After his required military service he decided to reenlist in the army and went to Syria as a sergeant in early April. His trip was supposed to have lasted for three months.

The soldier was reportedly on duty, escorting Russia's Hmeymim reconciliation center vehicles, when the convoy was shelled by the earlier this week. He was rushed to a Russian military hospital, but later passed away.

“The soldier had been transported to a hospital where Russian military doctors fought for his life for two days, but failed to save him,” a spokesman for Hmeymim base said on Wednesday.

Earlier in March, Putin ordered the pullout of the bulk of the Russian contingent in Syria after the campaign's objectives had broadly been completed.