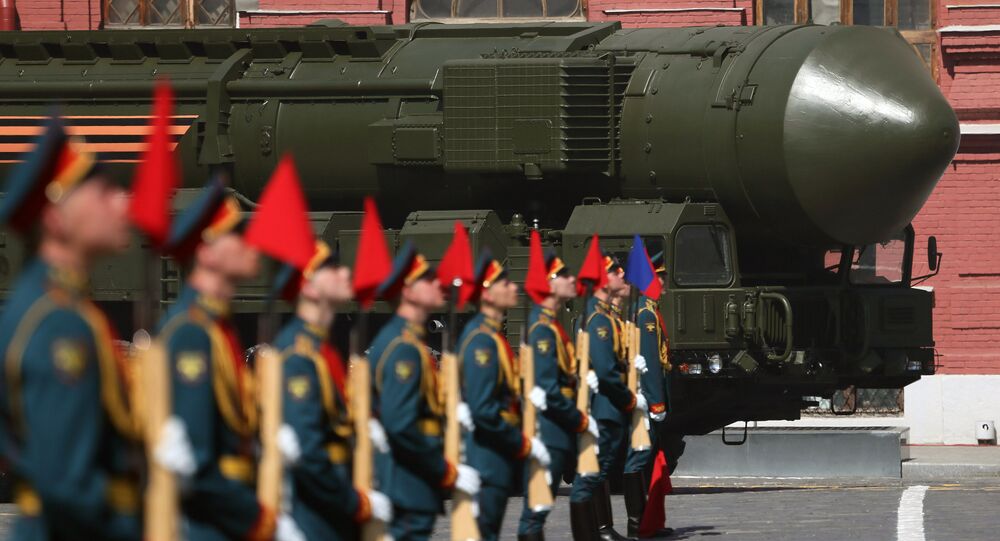 Western media drew some “valuable conclusions” about the general trend in the Russian military development based on the equipment “proudly displayed” during Moscow’s Victory Day parade.

Having analyzed the equipment showcased at Moscow’s Victory Day parade on Monday, Newsweek noted how “the Kremlin’s new tech protects its soldiers.”

“Russia is coming to the recognition that these people are trained personnel who represent the most valuable asset of the armed forces,” reads an article of an expert in Russian arms, Igor Sutyagin.

© Sputnik / Iliya Pitalev
Troops ride BMP-3 infantry fighting vehicles on Red Square, Moscow during the final practice of the military parade marking the 71st anniversary of the victory in the Great Patriotic War

He noted that the new design of the showcased armored personnel carriers (APC) now allows infantrymen to dismount under protection of the vehicle’s hull, thus radically improving survivability of infantry on a battlefield — and that is the standard feature of all new Russian armored vehicles, instead of infantrymen dismounting via side hatches right in the line of the adversary’s fire.

Armor protection of the new Russian vehicles has radically improved too, he says, providing much safer shelter for personnel on a battlefield, rather than the potential mass grave that they once were.

Host photo agency
Kurganets-25 armored personnel carriers with medium-category caterpillar chassis at the military parade to mark the 71st anniversary of Victory in the 1941-1945 Great Patriotic War, May 9, 2016

This, the expert notes, is a “radical departure from the previous practice where ERA was installed on tanks only while armored vehicles’ active defense systems were the technology demonstrated mainly for arms shows domestically and abroad, not for actual force protection.”

“Tayfun” armored lorries further confirm the conclusion. “Tayfun” vehicles are designed to be a secure means of troop transportation, saving lives in case of terrorist and mine attacks on troops en route, and making the entrepreneurial armor-cladding of existing standard lorries unnecessary.

The second novelty noted by the expert is the emphasis on maximizing troops combat “output.”

“New generation Russian combat and transport vehicles are evidently larger than their predecessors – their more spacious and ergonomic internal compartments provide much greater comfort for crews and infantrymen to operate their weapons in combat or preserve good shape even after long period of time spent inside vehicles.”

Taken together, Sutyagin concluded, these new standard design features provide evidence that the survivability of personnel has become a priority for the Russian political-military planners.

Britain’s The Telegraph also posted an article on the “grand parade on Moscow's Red Square on Monday.”

The newspaper called the Victory Day “Russia's most important secular holiday and a key element of the national identity, reflecting the nation's enormous suffering and honoring millions of victims of World War II.”

“The authorities, backed by state media, use the annual event to build patriotic sentiment and to underscore the importance of having a strong military to protect the country's borders,” it said.

In its report on the occasion, The New York Times also mentioned the “Immortal Regiment” march where “hundreds of thousands of ordinary Russians streamed through Moscow, St. Petersburg and other cities later on Monday holding placards pasted with black-and-white photographs of relatives who fought and, in many cases, died during the war.”

The media outlet also mentioned the history of Victory Day parades in Russia, noting that they “have taken on new significance under Mr. Putin, who has used them to showcase Russia’s military revival and renewed national pride after the chaos of the ’90s.”