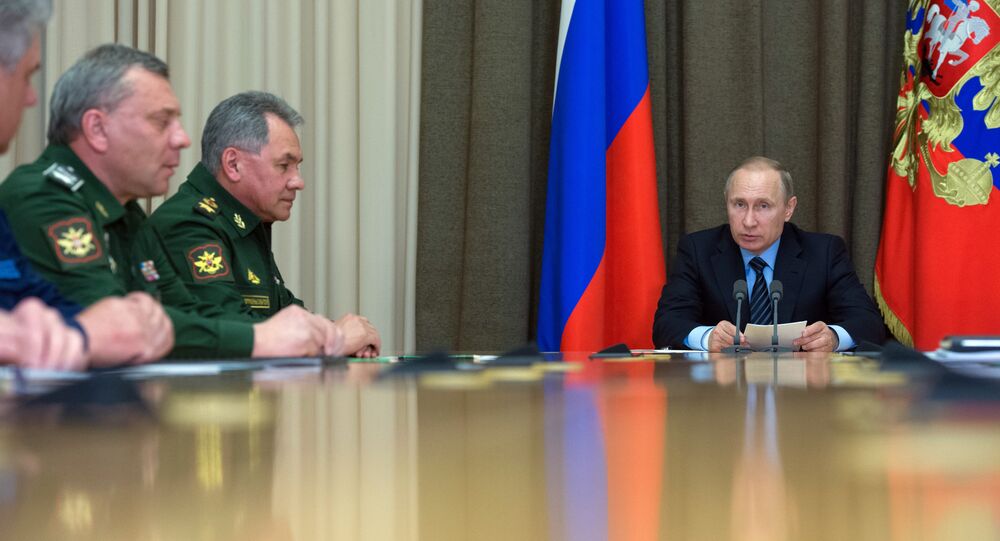 These included over 200 oil refineries, he added. Over 500 cities, towns and villages have been liberated from terrorists since the beginning of Russia's involvement in Syria.

"Since the operation beginning, Russian Aerospace Forces conducted 10,000 sorties hitting terrorist targets in the Syrian Arab Republic. More than 30,000 targets were destroyed, including about 200 oil refineries," Vladimir Putin said during the meeting with Defense Industry heads.

© Sputnik / Vitaliy Ankov
Game-Changer: What May Be Russia's 'Secret Weapon' in Syria?
A breaking point was achieved in the Syrian crisis thanks to the coordinated work of the Russian Aerospace Forces, the President added.

"Russian long-range bomber jets conducted 178 sorties; strikes on Daesh terrorist group and Al-Nusra front targets from sea and from the air were effective," he added.

The Russian leader added that the Aerospace Forces were able help liberate more than 500 populated areas in Syria from terrorist organizations.

"Overall, with the support of the Russian Aerospace Forces, Syrian troops were able to liberate more than 500 populated areas from terrorists, including, as we all know, the ‘pearl’ of world culture and civilization – Palmyra," Putin added.

© Sputnik / Sergey Kazak
Russia's 'Revolutionary' Hypersonic Weapons Second to None
During the operation in Syria, the effectiveness and quality of Russian weaponry were clearly demonstrated.

"The Russian Air and Space Forces and Russian Navy showed it in the best way," Putin said.

The situation in Syria is complicated, but it is necessary to create all the conditions for a political solution, the Russian president concluded.

"We understand that situation there [in Syria] is complex; the Syrian army has a lot to do. But the most important thing is to create the conditions for a political settlement of the crisis in the country," Putin said during the meeting with executives from Russia's military-industrial complex.

However, the operation in Syria had some problems, which should be resolved, the president said, adding that "each of them should be investigated."