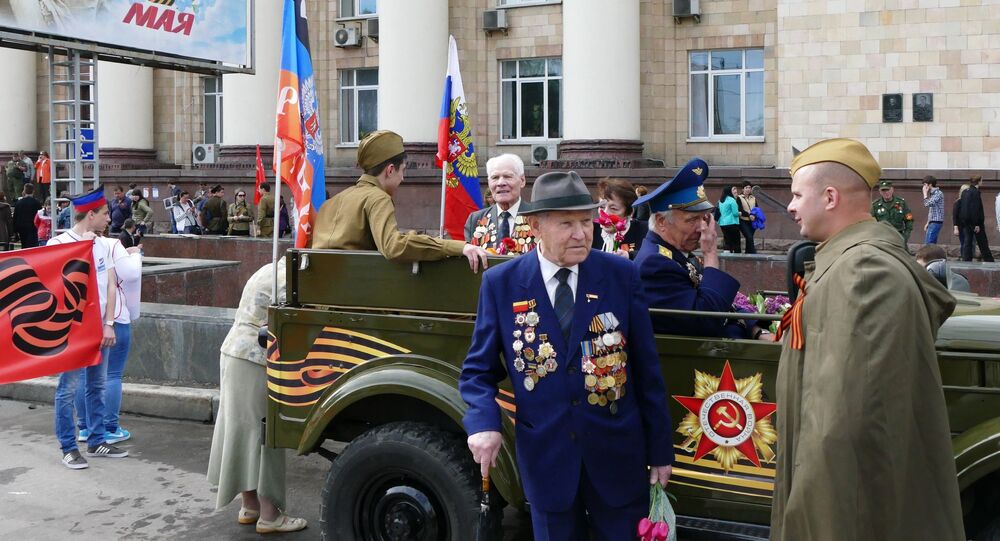 Monday marks the 71st anniversary of Victory Day, a solemn holiday commemorating the capitulation of Nazi Germany to the Soviet Union in the early hours of May 9, 1945. Independent Russian newspaper Svobodnaya Pressa ponders the significance of the holiday today, over seven decades following the historic victory.

On the eve of the celebrations, an article appeared in The Washington Post recalling that in the United States, the anniversary of victory in the European theater of operations in the Second World War is something most Americans don't think about, while in Russia and across the former Soviet Union, it's a victory that people can't forget.

"Ask any Russian about their family's World War II experiences and the answer, almost invariably, is one of suffering and battlefield service. Unlike the United States, which had two oceans that largely insulated it from attack after Pearl Harbor, Russia was besieged, bombed, invaded and re-invaded during World War II. Then the Red Army swept toward Berlin and played a key role in toppling Adolf Hitler," the paper recalls.

© Sputnik / Alexander Vilf
Parade Marking 71st Anniversary of WWII Victory in Moscow (VIDEO)
Nevertheless, the Post adds, the war "tends to be remembered in the United States as a victory by Americans, with the Red Army acting more or less as an adjunct."

And while ordinary people in any country cannot be blamed for the historical narrative that is presented to them, the academic and policy elites that create and mold that narrative undoubtedly play a harmful role.

According to Svobodnaya Pressa columnist Andrei Polunin, the trend to belittle the Soviet and Russian role in World War II is anything but accidental. The reason for this, the journalist explains, is quite simple: "Victory Day legitimizes Moscow's claim to the role of a world power, and that, for the West, and especially the US, is unacceptable."

"It's enough to recall, a year ago, how Washington attempted to use the celebrations marking the 70th Anniversary of Victory as a tool to isolate Russia. At that time, we remember, the US issued a call to its allies in the European Union to boycott the parade in Moscow. As a result, German Chancellor Angela Merkel refused to visit the Russian capital (she arrived in Moscow on May 10, and laid a wreath before the Tomb of the Unknown Soldier on May 10). The same was the case with the presidents of Poland, Lithuania, Latvia and Estonia, British Prime Minister David Cameron, European Council Chair Donald Tusk, the leaders of Norway, Finland and the Netherlands."

© Sputnik / Ilya Pitalev
Veterans and Victory: Russia Commemorates Anniversary of WWII Triumph
"It's clear why this is happening," Polunin writes. "The previous agreements, signed in 1945 by the leaders of the anti-Hitler coalition, have ceased to be acceptable for the USSR's Second World War allies (the United States and Great Britain) as well as its former opponents (Germany, Italy and Japan)."

As a result, with another world war, the classical method of reorganizing the world order, out of the question today thanks to the existence of nuclear weapons, "the process of revision rather resembles a hybrid war instead."

Resisting historical revisionism, the columnist argues, "can only be done collectively," by society in its entirety. In the contemporary world, this includes memorial events such as the 'Immortal Regiment', a civil society initiative which saw over 12 million Russians paying their respects to the memory of their departed relatives by marching with their photos on Victory Day last year, and millions more this year, in Russia and around the world.

In other words, "if the opportunity exists to maintain and strengthen our nation and its historical memory, it should be done. Then, attempts to suppress the truth about our country's role in the Second World War will become much more difficult."

© Photo : Evgeniya Novozhenina
Immortal Regiment March: Facts and Details
Speaking to Svobodnaya Pressa, Sergei Ermakov, the deputy director of the Taurida Information and Analytical Center at the Russian Institute of Strategic Studies, recalled that history is rewritten, first and foremost, when the old system of relations ceases to serve the interests of a state or group of states.

"Today it is obvious that the Yalta-Potsdam system of international relations, which became the outcome of World War II, de-facto no longer exists. Washington and its NATO allies are attempting to argue that a new system is needed." Naturally, "the new world order the Americans would like to build does not give consideration to the opinion of the players that were among the architects of the old system."

"In effect," Ermakov suggests, "the US wants to exclude Russia from the Yalta Troika." And to do so, "to solve this problem, it's necessary to discredit Russia. For example, it could be done by promoting the idea that the Soviet Union participated in the Yalta Conference only as an act of charity on the part of the West to a country that suffered great losses, but did not make a significant contribution to the victory over Hitler, and achieved only the liberation of its own territory."

"Namely this kind of distorted vision of events can be found in the works of some significant Western historians, and the works of theorists of the new world order. Today, these kinds of works are in high demand, are becoming popularized, and in a manner so skillful that it often becomes difficult to distinguish between truth and fabrication."

© AFP 2021 / YURKO DYACHYSHYN
V is for Vacuous: How Kiev is Fighting the Memory of Victory Day
For instance, the analyst recalls, on the eve of Victory Day, publications appeared in Poland intimating that the Soviet Union only interfered in the liberation of Europe. "The Poles themselves were supposedly ready to liberate themselves, but were simply waiting for something, but then the Soviet Union began its counteroffensive against the Nazis, and became an invader itself."

"Incidentally, it's worth recalling that beginning in the middle of the War, British Prime Minister Winston Churchill toyed with the idea that the Red Army must not be allowed to enter Europe, but should stay within the agreed boundaries, according to which Britain and the United States could liberate Europe and become the main victors."

Today, these ideas are once again finding traction. "Russia, from the standpoint of the US, has become a center of power that's interfering with the formation of a new world order. Therefore, the revision of history is aimed as an instrument meant to 'punish' Russia."

Moreover, Ermakov notes, the rewriting of the history of the Second World War is also part of the project to build a new European identity. "Attempts to build such an identity from scratch – to ingrain the idea that the Americans and Europeans are 'transatlantic brethren', have failed. And if this is the case, history too should be corrected – everything that does not fit into the 'transatlantic' concept should be rewritten under the new interpretation. In relation to Russia, this means that Russian warrior-liberators become warrior-invaders."

In this context, the analyst notes, the connection can be made by the ordinary Western man in the street, that 'since Russia played an aggressive and negative role during the Second World War, what it's doing now is also negative'. "How can a country of warrior-invaders do something positive in Europe, or in the Middle East, in Syria for example? Of course they can't!" the logic goes.

"The ordinary Western citizen assimilates this logic, and a negative attitude toward Russia is formed very quickly. I stress that the rewriting of history has played a catalytic role in this regard. Already, attitudes toward Russia in Western societies are very cautious. And since there is no trust, it's not a problem to build up one's military potential against Russia, or to aim missiles at this 'aggressor'."

© Sputnik / Sergey Guneev
Putin Urges Former Soviet States to Prevent Distortion of Shared History on 'Sacred V-Day'
Ultimately, Ermakov argues, "to counter the distortion of history, Russia needs to carry out systemic work. Annual celebrations dedicated to May 9 are not enough. In addition, we must stop with the endless discussions of the USSR's role in the war. After all, in the end, it was our soldiers who raised the flag of victory over the Reichstag."

"We must have a clear, focused position on these historical issues. Otherwise, we will lose our victory."

For his part, Colonel General Leonid Ivashov, the president of the Moscow-based Academy of Geopolitical Problems, recalls that attempts to revise the USSR's role in the war, unfortunately, began a long time ago, from the very first days of the Cold War.

"Only up to April 1945, while President Franklin Delano Roosevelt was alive, was information on the war provided to the American public in an objective manner. After Harry Truman entered the Oval Office, everything changed, and the propaganda machine deliberately began working on the distortion of history, and the exaltation of the US [role]."

© Sputnik / Harel Rintzler
Hundreds Participate in ‘Immortal Regiment’ March in Washington
"Today we see a similar picture, and it is understandable; the Americans are building a unipolar world, and find it impossible to build it any other way. The unipolar world consists not only of military power, but also the display of historical processes in a manner advantageous to its builders."

"Today," Ivashov suggests, "it's not worth attempting to convince ordinary Americans otherwise. In the US, a media machine exists that is so powerful that we will not be able to break into the American media field with our own truths. For us, the main thing is to work inside our own country, to work with our allies in the CIS and in the East – with China, India, and the countries of Latin America. The world must not forget about our contribution to the common victory."