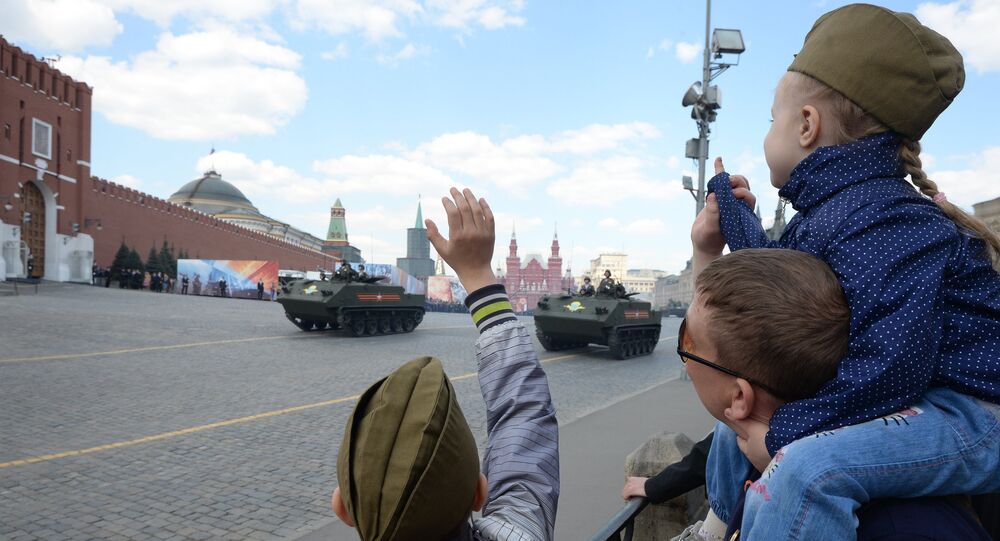 Russia is celebrating the 71th anniversary of its victory in World War II on May 9, in an event that will see military parades, fireworks and 'immortal regiment' processions all across the country, according to RT.

© Sputnik / Sergey Malgavko
WWII Clip Featuring Crimea's 'Cute' Prosecutor Poklonskaya Goes Viral (VIDEO)
Commemorative events honoring the 71th anniversary of the defeat of Nazi Germany in the Second World War will be held all across Russia on May 9, RT reported, providing a glimpse of  celebrations which have already been held in a number of cities in the Russian Far East and Siberia.

Residents of the city of Yuzhno-Sakhalinsk were the first to commemorate Victory Day with an array of activity, including the Immortal Regiment march, which began at 9:00 local time.

A total of 4,000 people took part in the event, including about 1,000 schoolchildren, according to RT.

Another city in Russia's Far East, Vladivostok, saw a military parade involving 1,500 servicemen and 49 pieces of military hardware. The parade was followed by the Immortal Regiment march, which was attended by at least 30,000 participants.

"Vladivostok is ready for the Victory Day parade. Hurrah to veterans who defended our Fatherland," read the tweet.

During a military parade in the city of Khabarovsk, spectators saw modern weaponry alongside3 World War II-related hardware and a column of vintage cars, which has become a distinctive part of the parade.

Similar equipment was also displayed in the military parade in the city of Chita, which additionally saw advanced S-300 surface-to-air missile systems.

"Congratulations on Victory Day! Wishing you all a peaceful sky!!!!! And we are now at the parade, according to our annual tradition!" Ilya with his grandfather, the Instagram post says.

In Blagoveshchensk, the capital of the Amur region, about 1,700 people took part in a military parade, which included an air show and a simulated landing of airborne troops with a Russian flag and the Banner of Victory.

The Immortal Regiment processions were also held in the cities of Irkutsk and Yakutsk, and were attended by 40,000 people and 15,000 people, respectively.