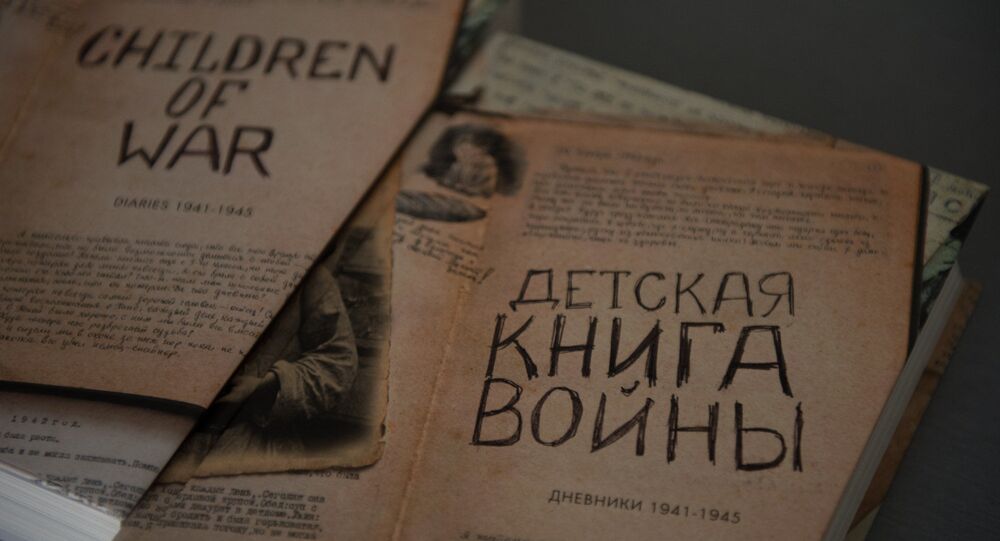 War Through Eyes of a Child: Unique Book of Diaries Out in 200 Countries

A unique collection of diaries written by Russian children during WWII put together by journalists of the Russian weekly Argumenty i Fakty has been published in Moscow. Sputnik News Agency and Radio helped in the publication of the English-language version of Children of War.

A Russian-language version of Children of War came out in 2015, in the walkup to the 70th anniversary of the Allied Victory over Nazi Germany.

“We have already sent copies of Children of War to the UN, UNESCO and UNICEF, the Simon Wiesenthal Center, the German Bundestag, the Library of Congress and leading media outlets in 200 countries around the world, that’s why it was so important for us to have an English translation,” the book’s editor Tatyana Kuznetsova told Sputnik.

The English translation of Children of War was done by Andrew Bromfield, Rose France and Anthony Hippisley.

© Sputnik / Evgenya Novozhenina
Russian Actress to Present Children of War Book in London on Victory Day
On May 9 Russian ambassadors around the world will present a copy of this book to the heads of state of 200 countries.

Children of War is a collection of 35 diaries written by Soviet children in Nazi-besieged Leningrad, in Jewish ghettos and concentration camps, on Nazi-occupied territories and on the home front.

More than half of these diaries have never been published before. They are horrifying and honest testimonies of the terrible fate that befell millions of little citizens of the Soviet Union during the war.

“Some of these children just wanted to write about everything that was happening around them. Some started writing their diaries right on June 22, 1941. They realized that something very important was going on and they had to write it all down. Many of these diaries are really mature texts, an attempt to comprehend things, themselves,” Tatyana Kuznetsova said.

When asked whether there had been any feedback on the Russian-language version of the book, Tatyana said that they had some diaries sent in by museums and archives and some — by AiF readers.

“"Anyone who has a chance to read this book will be really shocked by what these children went through,” she added.