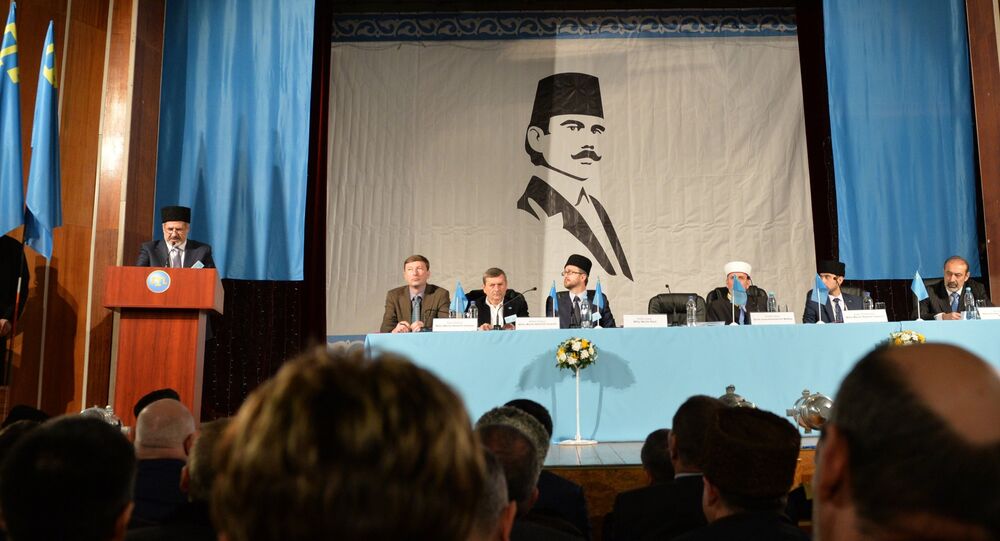 Reacting to the Crimean Supreme Court's decision to ban the Mejlis movement in Russia, 'Crimean blockade' organizer Lenur Islyamov said that now may be the time to create a 'Crimean Tatar army'.

© Sputnik / Mihail Mokrushin
Crimean Supreme Court Rules Mejlis Tatar Organization Extremist, Bans it in Russia
Last week, the Crimean Supreme Court ruled that the Mejlis, which claims to represent Crimean Tatars, is an extremist organization, and banned its activities in Russia. Crimean Attorney General Natalia Poklonskaya, advocating the ban, underscored that the group "exists only to fuel hatred and hostility."

The ruling follows an earlier Justice Ministry move to suspend the group's activities after it was accused of having links to international terror groups including Hizbut-Tahrir and the Turkish neo-fascist 'Grey Wolves' organization.

Reacting to the ban, Lenur Islyamov, one of the troika of Ukraine-based Tatar politicians responsible for organizing the so-called food and electricity 'blockades' of Crimea late last year, told Radio Free Europe's 'Krym.Realii' internet portal that the present may be the perfect moment for ethnic Crimean Tatars to create their own army, Ukraine's Vesti online newspaper reports.

"Perhaps now, the Crimean Tatar people will finally understand the need to create their own army. We have the political strength, we have the deputies in the Verkhovna Rada [Ukraine's parliament], but we do not have our own army. Therefore, we must make it so that we have our own army, within Ukraine," the nationalist organizer said.

© AP Photo / Max Vetrov
Moscow 'Not Interested' in US Opinion on Crimean Tatar Organization
Islyamov is known for his braggadocios style, and his tendency to exaggerate. Late last year, he bragged that the Turkish defense ministry had promised to provide his group with assistance to form a 560-man 'volunteer battalion', to be comprised of Crimean Tatar nationalist volunteers. That plan, apparently, has come to naught.

In January, Islyamov announced that 'activists' were preparing a 'naval blockade' of the Crimean peninsula. That plan too seems to have fallen through, presumably because it was set to be organized in Russian territorial waters. Russian border services had previously indicated that they would not tolerate any attempts to sabotage the free movement of ships through the Kerch Strait, which connects Crimea to Russia's Krasnodar Region to the east.

In 2014, after Crimea's return to Russia, President Putin signed a decree aimed at ensuring the Crimean Tatar community's political and socio-economic rehabilitation, meant to right the wrongs committed against the group under Joseph Stalin, who deported the minority en masse to Central Asia during the Second World War. The Tatar language has been made an official state language on the peninsula, and the minority now has guarantees to government representation, as well as a number of preferences aimed at preserving and respecting their culture, including making Muslim holidays state holidays and providing subsidies for pilgrimages to Mecca.

Moscow 'Not Interested' in US Opinion on Crimean Tatar Organization