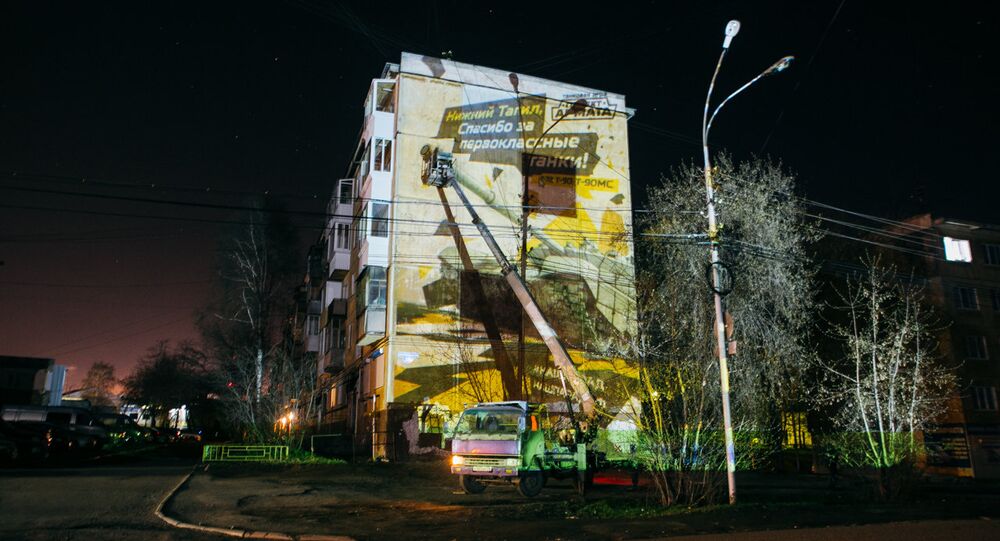 Huge images of sophisticated Russian tanks will appear on the facades of apartment buildings in a number of major Russian cities in the run-up to celebrations dedicated to the Allies' victory over Nazi Germany in the Second World War.

© Sputnik / Ramil Sitdikov
Death Proof: Russia’s T-90 Battle Tank Withstands US Missile Attack in Syria (VIDEO)
On May 2, 15-meter posters featuring advanced Russian tanks will be placed on the facades of apartment buildings throughout several of the country's largest cities, including the capital Moscow, Nizhny Tagil, Nizhny Novgorod, Omsk, Chelyabinsk and Yekaterinburg, according to Ria Novosti.

These cities' firms and factories are responsible for having designed and produced the most advanced types of Russian armored vehicles over the past fifty years, including tanks such as the T-14 Armata, the T-90MS, the T-80 and the T-72, as well as the self-propelled howitzers Koalitsiya-SV and Msta-S.

The #NashParad (Our Parade) promotion is being launched by a team from the Russian online tank game Project Armata, alongside Mail.Ru Group, which owns Russia's leading email service and owns the country's most popular social network, VKontakte.

It is part of an educational project related to the achievements of modern Russian armored vehicles; its information partners include the Russian International Information Agency Rossiya Segodnya and Rosinformbyuro. Details about the #NashParad project are already available on the relevant website, which will officially be unveiled on May 1.