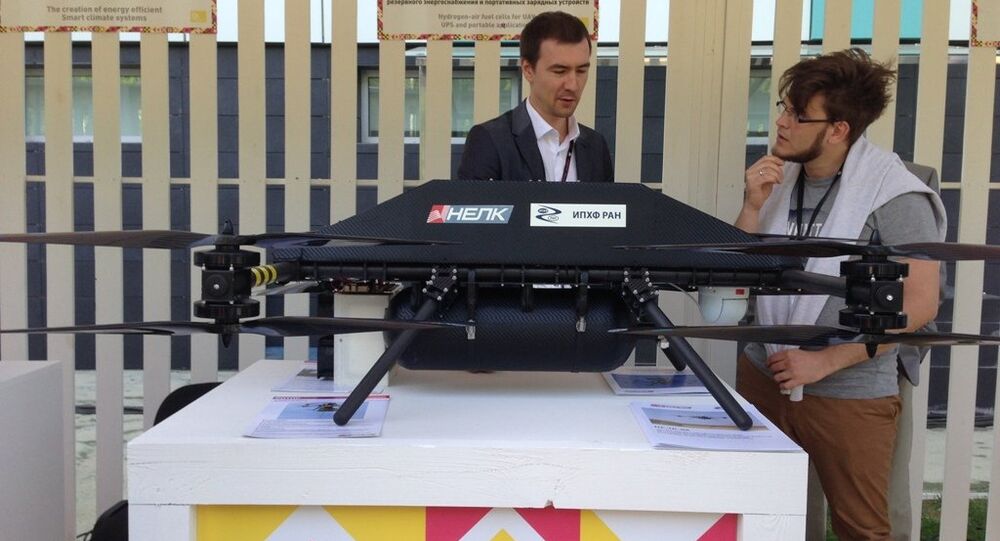 © Photo : YouTube/Ruptly TV
Russia's Finest Drone Pilots Show Off Their Skills in First Ever Grand Prix (VIDEO)
A world record for flying in natural weather conditions has been broken by a state-of-the-art octocopter made by the Russian company NELK, the Russian newspaper Izvestia reported.

The new record was set during the drone's test flight in the town of Chernogolovka in the Moscow Region, which lasted three hours and 10 minutes amid gusty winds and pouring rain.

"A Russian drone breaks a world record for flight  duration", according to this tweet.

Despite these flying conditions, the 12-kilogram drone changed altitude and transmitted images and video to a ground-based control center, Izvestia said, citing NELK's executive director Igor Vasilevsky as saying that the octocopter's payload stands at 0.5 kilograms.

"The octocopter is equipped with a power-supply unit with hydrogen-air fuel elements which helped the drone establish a world flight endurance record during cold weather conditions and high humidity," he added.

© Photo : Ministry of Defence of the Russian Federation
Why Russia Really Needs New Underwater Drone That Sends Shivers Down Pentagon's Spine
The innovative hydrogen-air fuel elements were developed by specialists from the Baranov Aviation Motor-Building Institute and United Aircraft Corporation of Russia, according to the Izvestia.

The newspaper also said that in artificial weather conditions, namely, when flying in a hangar, the Russian octocopter could fly for four hours and 20 minutes. The world record in this field currently belongs to a Canadian-made drone, which hovered in the air for three hours and 43 minutes.