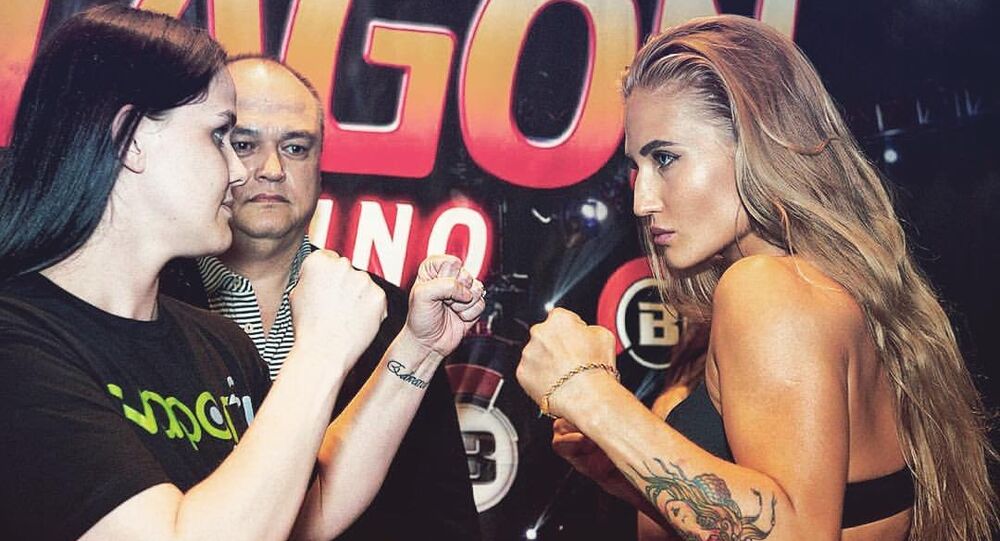 "In a sport that proudly boasts a key demographic of vibrant 18-34 year old males, Yankova’s first impression of course ran surface deep," MMA Fighting website wrote in its preview to the fight.

"She’s blonde. She’s fit. She doesn’t have scar tissue or cauliflower on her ears. She looks like a model."

Tired but happy 😌 #Repost @officialmmajunkie with @repostapp. ・・・ Anastasia Yankova (@anastasia_yankova) makes her Bellator debut this weekend at Bellator 152 in Italy. MMAjunkie.com will be on-site for all the action. #Bellator #MMA Photo by @perhaljestamphoto of USA TODAY Sports

Anastasia Yankova and American Anjela Pink met in a women’s flyweight bout at Bellator 152 at Pala Alpitour in Turin, Italy on Saturday night.

Yankova put on a dominant performance and cinched victory via submission. Right after the bell sounded for the first round, she immediately clinched with Pink leading to a swift take down. From there, she found mount and locked in an arm bar, finishing the fight in the second minute of the first round.

Anastasia was introduced to the American palate in Houston in February, as part of the Bellator 149 festivities.

For the former Muay Thai champ (2-0 MMA) this was the third time she fought as a professional mixed martial artist.

"My opponent has similar MMA experience," Yankova told journalists before the fight. "We’ve both had two fights. Even though she had two amateur fights, the level of MMA in the US is so much higher. So amateurs are not that far behind professionals. Our experience level is similar."

To help make the transition, Anastasia has been training with the likes of Lyoto Machida  and Mauricio "Shogun" Rua (Brazilian mixed martial artists) — both of whom she credits as her motivation to enter the sport — at Kings MMA in Los Angeles,  according to MMA Fighting website.

"I used to watch fights, and after practice would always stay behind in the gym and ask guys to show me different MMA moves," the website quotes Yankova as saying.

"MMA always intrigued me and I knew it was just a matter time before I stepped into the cage. At the time I had a contract with a kickboxing promotion in Russia so all of my time was dedicated to stand up training, which left little time to explore MMA."

Successful in her two MMA fights to date, Yankova has a strong background in a variety of combat sports.

She is a proven commodity in kickboxing having taken up karate aged six in Moscow, and competed in Kyokushin karate until she turned 14.
Then she took some time to concentrate on her studies, before taking up Muay Thai aged 19.

Her fighting style, personality and beauty have already seen her compared to Ronda Rousey.

"Ronda has done so much for this sport — she is not just a talented athlete but is also a powerful personality,"  Yankova said in her recent interview with AXS.

"She doesn't try to be something she's not, she's genuine, and you may like her or you may hate her, but she is genuine, that's what I think at least."

"But I have a long ways to go to reach her level of grappling. But I have the will to do it and time to do it, so let's wait and see what happens."
Commenting on her model looks:

"All woman love to hear they are attractive, and female fighters are no exception, trust me," she told MMA Fighting via email.

"I look at modeling as an art form. Creating something new and beautiful is always fun, especially if it motivates others to get in shape, or get into sports. That's even better."

Boobs of Steel: Meet the F-Cup Fighter Shaking up MMA

Putin Prize to Be Offered in Martial Arts Contest in London