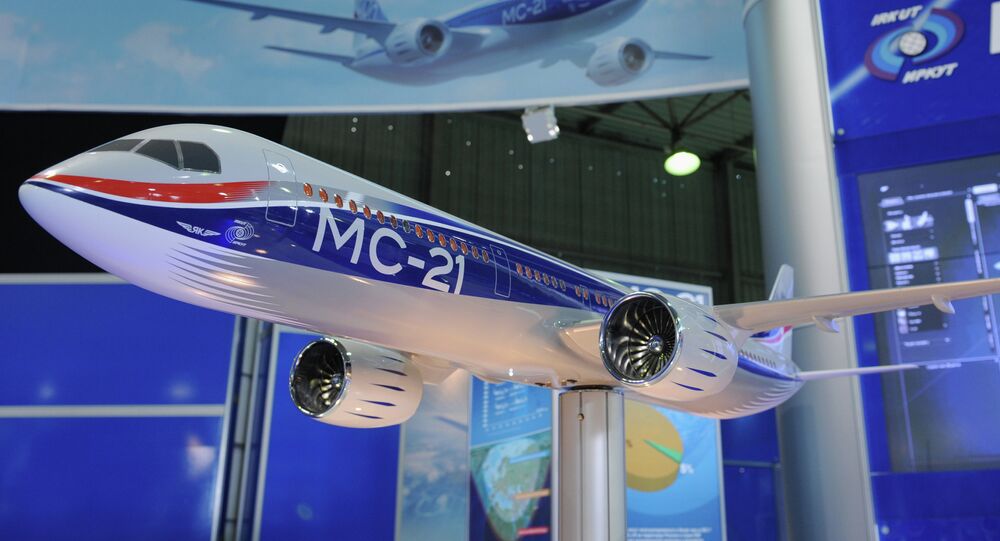 The first Irkut MC-21, Russia's brand new short- to mid-range narrow-body passenger jet airliner, set to compete with Boeing and Airbus, will roll out of the assembly plant in June for flight testing and certification. What surprises will the new plane have in store for its competitors? Sputnik finds out.

On Friday, United Aircraft Corporation (UAC) president Yuri Slusar announced that the first Irkut MC-21 (also known as the MS-21) will be completed by June 7. "We hope that by the end of the year, the first flight of the MC-21 will take place," he added.

​The Irkut MC-21, dubbed the 'Airliner of the 21st Century', is really a series of twin-engine short to medium-range jetliners, with potential capacity of between 150-212 passengers.

The new plane, Russia's Lenta.ru recalls, is expected to compete in the same niche as Boeing's new 737 MAX, as well as the Airbus A320neo, each of which only recently appeared on the market. At the moment, Russian aircraft builders are "literally on the heels of their competitors: certification and commissioning of the first planes is planned for later this year, and mass production is set to begin in 2017."

© Sputnik / Anton Denisov
Back to the Future: Russia Ready to Reenter the Passenger Plane Big Leagues
The new aircraft's design characteristics are owned by the Yakovlev Design Bureau. Following the collapse of the Soviet Union, the newly privatized design bureau lost government backing, and spent much of the 1990s hobbling along on the brink of survival.

The bureau had three major projects going: the Yak-130 combat training aircraft, the Yak-141 supersonic VTOL (vertical takeoff/landing) jet fighter, and groundwork studies for a short- to medium-range passenger aircraft, known as the Yak-242. The company chose the Yak-130 as its priority project, and together with Italy's Aermacchi, succeeded in bringing the plane to the production phase.

In the early 2000s, the Russian Aerospace Agency announced a competition for the development of a new aircraft to replace the Tu-154, the legendary Soviet-era workhorse which had faithfully served Aeroflot since the 1960s, and eventually came to carry nearly half of the massive airline's passengers. The Tu-154 began to be retired off in the mid-2000s, with many Russian airlines buying or leasing Boeing and Airbus planes to replace the reliable but outdated airliner.

In 2003, the Yakovlev Design Bureau was announced as the winner of the competition. The same year, the company became part of Irkut Corporation, which itself was later amalgamated into the United Aircraft Corporation. The merger was seen as mutually beneficial, with Irkut looking for a design bureau for passenger aircraft, and Yakovlev the necessary physical production capacity.

Despite its origins in the Yak-242, it would be wrong to consider the MC-21 a direct continuation of the Yak-242 project. "No one ever set the goal of just putting the finishing touches on the Yak-242, since it did not meet the requirements of the market. Therefore, the corporation carried out research and development work, out of which the completely new technical characteristics of the MC-21 were born," a source in the aircraft industry speaking to Lenta.ru explained.

© Flickr / SuperJet International
Russia's United Aircraft Corporation to Double SSJ100 Production by 2017
In 2012, then-UAC head Mikhail Pogosyan (one of the main proponents of the Sukhoi Superjet 100), estimated that the MC-21 would require 160 billion rubles (currently about $2.4 billion US) worth of investment to develop. Another 70 billion ($1.05 billion) was said to be necessary for the development of the new domestically designed PD-14 engines, which will be tested on the MC-21 starting next year.

From an economic standpoint, there are already some encouraging signs. "Irkut says that it already has solid, prepaid contracts for the supply of 175 MC-21s for domestic leasing companies and carriers." Moreover, other airlines, including foreigner carriers, are said to have inked letters of intent (including options to purchase) for an additional 100 planes.

The aircraft's design, Lenta.ru recalls, features a number of design decisions considered revolutionary for Russian aircraft manufacturers. "The carbon wings and tail, in particular, attracted the attention of the Japanese press in February, with the Japan Business Press publishing an article under the headline 'MC-21's Carbon Wings More Advanced Than Boeing 787'."

Speaking to Lenta.ru, a representative of AeroComposite, the company responsible for producing the new wings, explained that the wings' load-bearing components are an entirely domestic development.  "Its specificity is the use of dry carbon filler to create composite structural elements. The end result is a monolithic element up to 20 meters in length. The MC-21's wing is a so-called 'high aspect ratio' wing', characterized by high aerodynamic quality," the rep said.

Irkut, for its part, has pointed to a series of major advantages of its plane over that of its competitors, including advanced aerodynamics, the possibility of using both American Pratt & Whitney engines and the domestic PD-14, and an enlarged fuselage (4.06 meters in the MC-21, versus 3.96 and 3.75 meters in the A320 and Boeing 737, respectively), which means larger passenger and luggage compartments.

© Photo : irkut.com
Passenger area of the MC-21, with a notably roomy aisle space.
© Photo : United Aircraft Corporation (UAC)
Russian Irkut Corporation Regards Iran as Potential Buyer of MC-21 Aircraft
The densest arrangement of the MC-21-300 allows for 211 passenger seats, versus 189 seats in the Boeing 373MAX and 180 in the A320neo.

At the same time, the MC-21 is expected to have nearly 25% lower fuel consumption than other aircraft in its class.

"It's obvious," Lenta.ru notes, "that the state is making a serious bid on the MC-21, and is ready to invest a great deal of money into the project. Last year, incoming UAC President Yuri Slusar called the MC-21 project the 'backbone' of the domestic aircraft manufacturing industry."

The timeframe for the plane's rollout has been pushed back several times, "mainly due to the introduction of new technological innovations and know-how."

Russian aviation experts are hopeful that economic efficiency, technological advancements, and competitive cost ($70-80 million vs. the $100 million for the 737MAX and the A320neo), should help the aircraft's sales abroad. "Irkut's idea [from the start] was really to create a high-tech plane and to pick up market share through its advanced qualities," the industry source told Lenta.ru.

Strategy Partners Group researcher Artem Malkov emphasizes that Irkut will have to "significantly expand the geography of sales, and, in the near term, to enter into firm contracts outside Russia, because our domestic market is small, while the world market is densely occupied by competitors. At present, Boeing and Airbus have contracted over 75% of the total demand for single-aisle aircraft in the world until 2025."

© Sputnik / Sergey Subbotin
First Russian-Made Aerial Refueling Tanker to Start Flight Tests in 2016
Preparing a functioning service network for the plane abroad will be necessary even before serial production begins, he emphasized.

Moreover, Lenta.ru says, "it's impossible to ignore the political dangers that will inevitably arise when promoting the MC-21 abroad." This includes prospects for a worsening political situation in Irkut's main markets – Asia (including India), and Africa (particularly Algeria).

Also, since the MC-21 would serve as a direct competitor to the two US and European aircraft builder behemoths, Irkut may come up against artificial problems or delays in the aircraft's certification.

For his part, Aviaport analytical services agency head Oleg Panteleyev is convinced that the new plane will not have any difficulties with certification. Moreover, he says, the MC-21's characteristics make it ideal for start-up airlines in emerging markets, and for established carriers that have abandoned traditional single-aisle aircraft.

"Moreover, there are gaps in the seemingly unshakable duopoly of Boeing and Airbus: contracts with them are concluded several years in advance. A new player with a competitive product will be able to count on orders from customers who are not ready to wait for a long time," Lenta.ru explained, summarizing Panteleyev.

Ultimately, the news site noted, Irkut does not expect to squeeze the giants of Boeing and Airbus out of their dominating position, "but getting part of the market anyway is quite a feasible task." For his part, Irkut head Oleg Demchenko believes that if the MC-21 wins over at least 10% of the market, the project can be considered a success.

Back to the Future: Russia Ready to Reenter the Passenger Plane Big Leagues