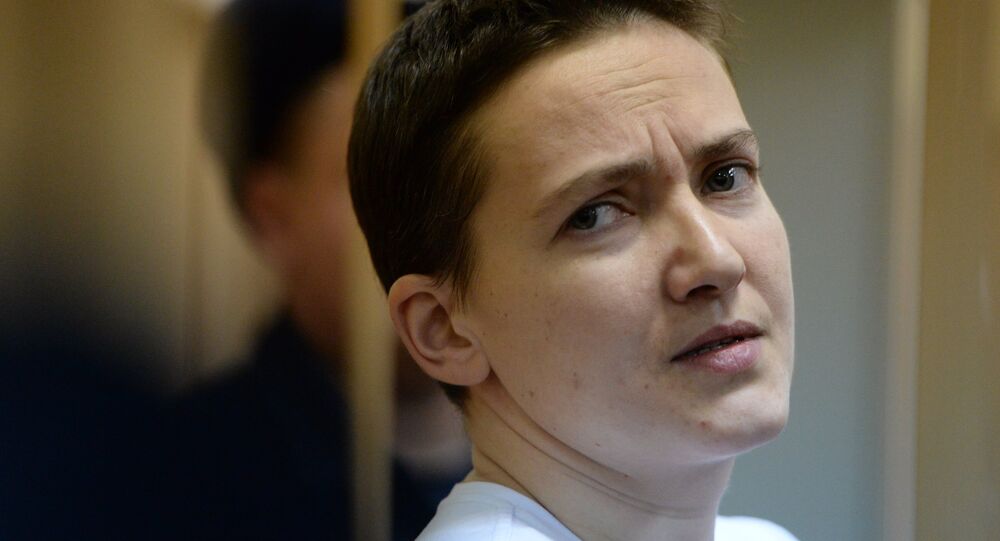 The German Federal Foreign Office has offered Moscow to send a group of doctors via diplomatic channels early this month to treat Ukrainian national Nadezhda Savchenko convicted in Russia, a spokesman for the German Ministry said Wednesday.

© REUTERS / Stringer
Savchenko to Get Medical Help if Health Deteriorates – Kremlin Spokesman
BERLIN (Sputnik) – Savchenko, who is currently serving a 22-year jail term for her part in killing Russian journalists in eastern Ukraine, was reported to be refusing food and water in protest against her detention. Kremlin spokesman Dmitry Peskov earlier said that the Federal Penitentiary Service was monitoring her well-being and that she would receive assistance if concerns arise.

"In recent days, we have again offered German doctors to Russia via diplomatic channels. We have not received a response so far, we are waiting," Martin Schaefer said. He reaffirmed Berlin's call for a "humanitarian" resolution to the case surrounding Savchenko.

The Russian Federal Penitentiary Service said earlier that Savchenko had given written permission for regular medical inspections, adding that the latest checkup found her to be in satisfactory health condition.

Savchenko was sentenced in late March after being convicted by a Russian court of directing artillery fire during the conflict in eastern Ukraine that led to the deaths of two Russian journalists, Igor Kornelyuk and Anton Voloshin, on June 17, 2014.

She refused to appeal the ruling, and her lawyers say Ukrainian authorities are attempting to organize her transfer.