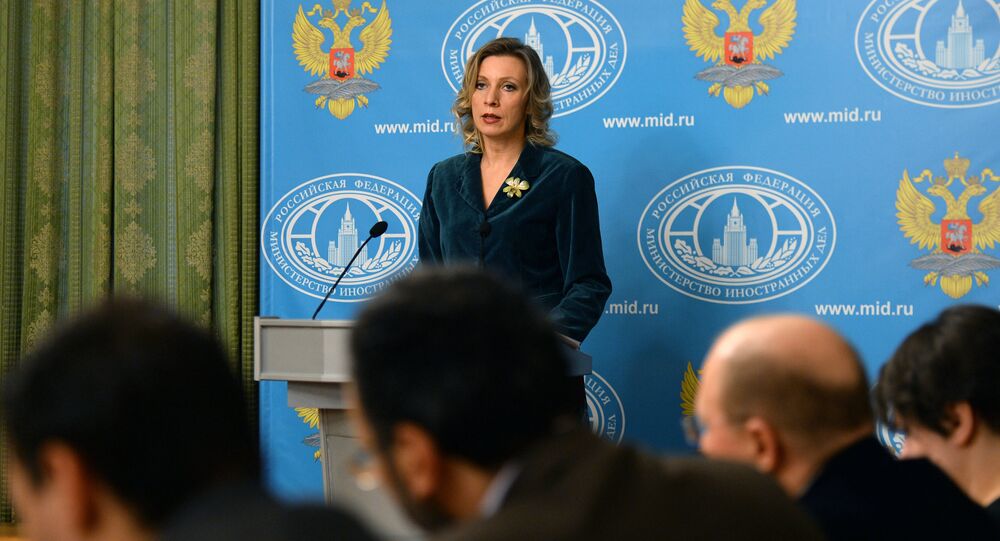 Russian Foreign Ministry spokeswoman Maria Zakharova held her weekly press-briefing on Wednesday, commenting on a wide range of issues from the settlement of the Nagorno-Karabakh conflict to the latest developments in Syria.

On the Settlement of Nagorno-Karabakh Conflict

Maria Zakharova said that the Russian President has held telephone conversations with the presidents of Azerbaijan and Armenia. Russian Foreign Minister Sergei Lavrov is going to visit Azerbaijan on Thursday and will visit Yerevan on April 21-22.

Russian Foreign Minister Sergei Lavrov will meet with his Azerbaijani counterpart Elmar Mammadyarov during his visit to Baku on April 6-7.

"He will meet with his colleague, the head of the Azerbaijani Foreign Ministry," Zakharova told reporters, adding that the sides would discuss ways to settle the situation in Nagorno-Karabakh.

© Sputnik / Ilya Pitalev
Armenia, Azerbaijan's General Staff Agree to Ceasefire in Nagorno-Karabakh
Maria Zakharova also noted Russia's constructive role in the settlement of the conflict, adding that Russia acts as a co-chair of the Minsk group working on the issue.

The Russian Foreign Ministry spokeswoman also commented on the situation with the journalists of the Russian LifeNews channel, who were deported  from Azerbaijan, urging for the work of all mass media sources to be respected.

Maria Zakharova reiterated that Russia will do its best to help to settle the ongoing regional conflict.

The Russian Foreign Ministry spokeswoman welcomed comments by the Deputy Spokesperson for the US Department of State that the future of President Assad should be decided by a political process.

She stressed that the fate of the Syrian president should rest in the hands of Syrians.

© Sputnik / Mikhail Voskresensky
Russian Bomb Squad Clear 158 Mines in Syria's Palmyra in Past 24 Hours - Defense Ministry
Maria Zakharova reiterated that Moscow insists on the participation of the Syrian Kurds in the upcoming round of Syrian negotiations. She also said that Moscow is concerned over the high level of violence in Kurdish-populated provinces in Turkey.

Moscow has also called on Ankara to end its military solution to the Kurdish issue, calling it a dead-end method.

"The level of violence that is not being reduced in the Kurdish-populated southeastern provinces of Turkey continues to be a concern. According to official data, since the beginning of the current Turkish government's so-called anti-terrorist operations in July 2015, 285 civilians have been killed, and this is only according to official figures," Zakharova said during her weekly briefing.

"We again call on Ankara to give up betting on the dead-end method of force in solving the Kurdish problem," she added.

© Photo : Youtube/Urar Tulu
Where’s the Justice? Turkish Court 'Lays No Murder Charges' Against Alleged Killer of Russian Su-24 Pilot
"We again call on Ankara to give up betting on the dead-end method of force in solving the Kurdish problem," she added.

Maria Zakharova also noted that over 1,500 explosives have been neutralized in the Syrian city of Palmyra with the assistance of Russian experts.

With regards to ultranationalist Alparslan Celik, who was arrested and questioned by Turkish authorities, Maria Zakharova said that Russian authorities are working on criminal proceedings against him for the killing a Russian Su-24 pilot.

"We were ready [for these reports] in the sense that, as you know, the [Russian] presidential administration had made a statement on an upcoming smear campaign, allegedly presented as facts. But I think everyone was expecting something more," Zakharova said at a daily briefing.

According to the spokeswoman, the alleged documents were not focused on Russia and they would not affect the work of the Russian ministry.

Mossack Fonseca has refused to validate the information contained in the leaks and accused reporters of gaining unauthorized access to its proprietary documents. One of the company founders in an interview with TVN TV channel has said that some documents had been stolen, but refused to specify, which ones.

On the British Reports on "Russia's Information War"

Maria Zakharova noted that the objective of anti-Russian propaganda was at first a very profitable business which later grew into a tool with a healthy budget for military purposes.

She also noted that when NATO is strengthening militarily it is considered "defense", but while someone else is doing the same it is considered an "aggression." This is just double standards, she said.

© Wikipedia / sfu
Monumental Revision: Poland May Destroy 500 Statues of Soviet Soldiers
Maria Zakharova commented on the continuous misinformation fabricated to blame Russia for the downing of the MH17 flight in Ukraine, calling it blasphemous in reference to the relatives of the victims.

On the Demolition of Russian Monuments in Poland

On April 6 Referendum in the Netherlands to Back or Reject the EU-Ukraine Association Agreement.

The Russian Foreign Ministry spokeswoman stressed that the voting should be an objective expression of the people's attitude towards the future they would like to live in, without any outside pressure.